You can make it a great weekend by seeing Saul Steinberg's art, watching the hilarious play "Noises Off" or visiting a Lloyd Library exhibit about edible plants 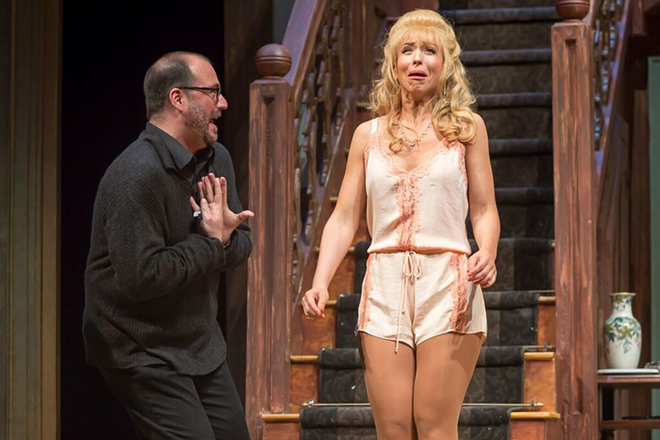 Theater dominates the cultural events in Cincinnati this weekend (and into next week) with the Fringe Festival underway (check out our reviews here) and with Ensemble Theatre's long-awaited revival of Hedwig and the Angry Inch set to open Wednesday. (See our advance here.)

But don't overlook Ed Stern's hilarious production of Michael Frayn's Noises Off, considered one the funniest plays ever. This is a British sex farce as only the British can do, as an overmatched group of theater actors hysterically struggle to mount their production. It's at Cincinnati Shakespeare Company through June 9, so there's not much time left to see it. Tickets/more info: cincyshakes.com.

Looking for something else to do arts-wise? Here are four CityBeat recommendations:

• Carl Solway, who seems to have had a personal relationship with every major Contemporary artist of the second half of the 20th century (and into the 21st, too), knew the late, great artist Saul Steinberg well. He used to visit him in New York to choose drawings to sell here. To celebrate the Cincinnati Art Museum's recent reinstallation of Steinberg's epic "Mural of Cincinnati," he has put together a show of Steinberg Prints 1948-1996  once owned by the artist, himself, and still in the possession of his foundation. The work is inexhaustibly imaginative and fun. The work is up at the gallery, 424 Findlay St. in the West End, through July 15. More information: solwaygallery.com.

• And while we're at it, don't forget to see that newly installed "Mural of Cincinnati" at the Cincinnati Art Museum. It's one of our civic treasures and you can read about it here.

• Chilean filmmaker Sebastián Lelio works fast — not long after winning this year's Academy Award for Best Foreign Language Film for A Fantastic Woman, he brings his new English-language film, Disobedience, to the screen. According to the summary on the Mariemont Theatre's website, "the film follows a woman as she returns from New York after the death of her estranged rabbi father to the Orthodox Jewish community in North London where she grew up. Once back at home, she stirs up controversy when she shows an interest in a childhood friend." The film stars Rachel Weisz, Rachel McAdams and Alessandro Nivola. It's been hailed as one of the best indie films of 2018 to date. Showtimes/more info: mariemonttheatre.com.

• Garden to Table is not just the buzz phrase of home cooks and trendy restaurants — it’s also the name of the current exhibit at the Lloyd Library and Museum, which Kathy Schwartz wrote about in this week's CityBeat. Though known for its collection of botanical books dating to the 1400s, the downtown Cincinnati institution has been taking a fresh approach to celebrating a summertime tradition. This show of gorgeous historical illustrations of edible plants and vintage seed catalogs is well worth a visit to the Lloyd to familiarize yourself with its exhibitions and activities. It's at 927 Plum St., Downtown. More information: lloydlibrary.org.