Judy McCarty Kuhn served as Editor-in-Chief of the University of Cincinnati's student newspaper 'The News Record' from 1966-67 — an experience she chronicles in 'The Other UC and Me: Editing the Sixties.' 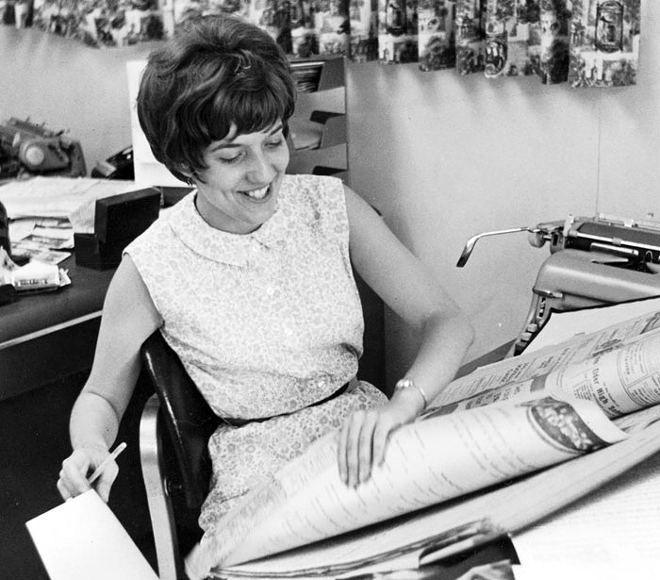 Photo: Provided
Judy McCarty Kuhn as News Record editor in the 1960s, a tumultuous decade at the college.

Judy McCarty Kuhn’s journey to authorhood began with a six-pound, red-bound volume of The News Record, the University of Cincinnati’s independent student newspaper. Commemorating her year-long stint as Editor-in-Chief from 1966-67, the volume’s pages, now yellow and frail, depict a tumultuous time in American history.

The country was roiling from the assassination of President John F. Kennedy, the Vietnam War raged, racial prejudice was prevalent and protests swelled across the country. UC’s campus was a microcosm of the nation, and the News Record staff was in the middle of it all.

“We saw all sides to it,” Kuhn says. “We saw the protestors, the anti-protestors, we saw the press releases — we were really involved in everything.”

That unique vantage point is chronicled in Kuhn’s recently released book, The Other UC and Me: Editing the Sixties. The piece depicts the Vietnam Era through Kuhn’s eyes as a student reporter and editor, opening in 1963 during her freshman year and following her journey from an avid News Record reader to a reporter, Social Editor, Copy and Technical Editor and finally Editor-in-Chief. She was only the fourth woman to hold the paper’s highest position in the 85-year history of student journalism at UC.

Her primary goal for the book — part memoir, part history book — was to teach college students about what life was like on the home front during the Vietnam War.

“I had been thinking about doing it for a long, long time, actually probably ever since I finished being editor of The News Record,” Kuhn says of the book. “I thought, ‘Someday I’d like to write about these experiences.’ They were very hectic, but they were also exhilarating.”

Although she had contemplated the project for years, picking up her red-bound News Record volume and marking its pages with Post-It notes, a great niece gave her a final piece of inspiration. A student at Vanderbilt University, her niece was enrolled in a class on the history of the ’60s — a class Kuhn believed wasn’t capturing the entire picture of the era. Her niece encouraged her to write about her experiences, and she delved into the project in the winter of 2013.

To prepare for the book, Kuhn read everything she could find about the time period — amounting to approximately 50 books — and combed through online News Record archives, the availability of which, Kuhn says, made the book a possibility. Quotes from actual articles are used throughout The Other UC and Me, immersing readers in events as they unravel on the page.

“I did not want to talk about anything I did not personally experience, personally write about, proof-read, know somebody who had been there and done that,” Kuhn says. “I wanted it to be actually a memoir and not just a history, but at the same time to pull in as much history as I could.”

A retired Walnut Hills High School English teacher who also advised the school’s newspaper The Chatterbox, Kuhn wanted to write the book the way she and her students learned best: chronologically. Although many of the books she read on the era were divided into specific topics, Kuhn wanted to show how the events of the time fit and worked together.

To plan for this, she fashioned a timeline out of computer paper and began writing down everything she could personally remember about the era. Then, she went back and added additional information from books and archived News Record articles.

She says she wants readers to learn about the ’60s alongside her character in the book, who transitioned “from a naïve, skinny little girl who didn’t even look like a college student in the beginning to someone who finally begins to learn all these things as time goes by.” Although the book was written with college students in mind, Kuhn has found it’s also appealed to many readers from her own generation.

The personal touch Kuhn implements into her story is a key component of the book — an important element reflected in its subtitle, Editing the Sixties.

“It doesn’t just mean what it was like to edit during the ’60s,” Kuhn explains. “It’s also an attempt to edit the ’60s. I wanted to make sense of it, for the generation now, like my niece, so they would understand what was really going on, or for those of us who lived through it to look back and say, ‘Oh, that’s why this happened. This is what was happening on a national level and this is why people were reacting to it the way they were.’ ”

The “Other UC” portion of the title refers to a question Kuhn was frequently asked about attending the school: “Which one? UC Berkeley or UCLA?” At the time, the University of Cincinnati did not have a journalism program — the department was just recently implemented in 2012.

In the book, The News Record becomes a character of its own alongside Kuhn and the paper’s staff, which passionately works to publish the paper while navigating the vulnerabilities, rights and reach of the collegiate press.

Without the availability of the internet, the paper was one of the only sources of university news, making it a particularly powerful influence on campus. Published once a week, it was physically mailed to the entire student body.

Many of the issues the book touches on are strikingly relevant today, from contentious presidential elections and foreign wars to racial tensions, woman’s issues and community-police relations.

“What I’d like for (readers) to be able to come away with is to look to the past for solutions in the present. We have so many things today that are going on that were going on back then — so much in common with that era,” Kuhn says. “What we did right, we need to look at and try to follow. What we did wrong, we need to ignore.”

To purchase THE OTHER UC AND ME: EDITING THE SIXTIES, visit micropressbooks.com. A Kindle version is available at amazon.com.