The award is "bestowed annually to the player who best represents the game of Baseball through extraordinary character, community involvement, philanthropy and positive contributions," MLB says. 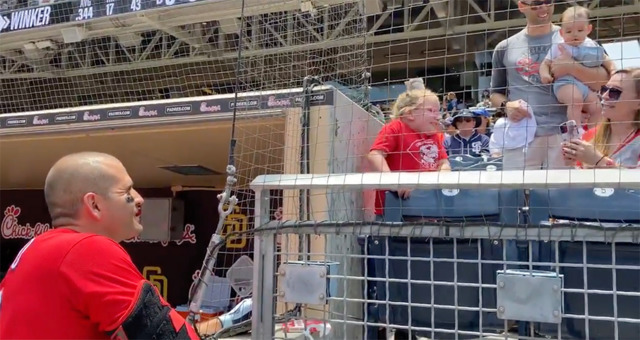 Cincinnati Reds first baseman Joey Votto has a heart as persistent as his swing. Now, fans can help honor him for it.

Votto is one of the candidates up for Major League Baseball's 2021 Roberto Clemente Award. Clemente played for the Pittsburgh Pirates for all 18 seasons of his career in the majors and was known for consistent, outstanding humanitarian acts. The award originally was called the Commissioner's Award but was renamed for Clemente in 1973 after the outfielder died in a plane crash while delivering supplies to Nicaraguan earthquake victims.

Today, the award is "bestowed annually to the player who best represents the game of Baseball through extraordinary character, community involvement, philanthropy and positive contributions, both on and off the field," according to MLB materials.

Votto is one of 30 players nominated for the Clemente Award. In the nomination information, MLB focuses on Votto's work with the Cincinnati Reds Youth Academy.

One of the most visible signs of the Reds and Major League Baseball’s impact in Cincinnati is the P&G MLB Cincinnati Reds Youth Academy. Completed in 2014, the site’s indoor training center bears the Joey Votto name thanks to his philanthropy. But what makes Joey’s contributions even more special is that he has continued to be as involved at the Academy long after the ribbon-cutting. And he has elected to do so in a way that is consistent with most of his charitable work – privately and without fanfare.

Joey is a regular visitor to the Academy and is heavily involved in the impact it makes on young people in Reds Country. In addition to showing his generosity by donating thousands of dollars in equipment behind the scenes, Joey goes many steps beyond by participating in hands-on baseball and softball work with the kids training at the Academy. This year, Joey adopted a 13U RBI team and took them under his wing. While he was on the injured list, he worked out with the team several times each week. He offered coaching advice while also taking the field and practicing with them.

Even when he returned to the active roster, Joey continued to make stops at the Academy whenever he could. He spoke to and trained with the two Reds RBI teams that qualified for the 2021 RBI World Series before they headed to Vero Beach, Fla., for the tournament. Earlier in the summer, on his way to the ballpark for that night’s game against the Padres, Joey stopped at the Academy to speak to the group of Home Base program participants. Home Base is a comprehensive, week-long camp for high school baseball and softball players that combines individualized athletic training with academic test preparation and life skills development. He fielded questions from the attendees and asked them questions right back, genuinely curious to learn more about them and their experience with the program. The desire to truly engage young people in these situations is what sets Joey apart.

MLB also recognizes Votto's other interactions with children, highlighting connections with Cincinnati Children's Hospital Medical Center and Make-a-Wish. In addition, Votto is a proponent of the Freestore Foodbank, which provides food and services to those in need.

Working with kids has always been a passion of Joey’s. In addition to his work at the Academy, Joey is a frequent guest of Cincinnati Children’s Hospital where he visits with patients. During the pandemic when these visits weren’t possible, he met with children virtually and sent recorded videos to kids before their surgeries.

At the ballpark, he also makes a point to spend extended time with all the Make-A-Wish visitors. Joey signs autographs, takes pictures and has conversations with them and their families. For games throughout the season, he also donates suites for Make-A-Wish visitors, guests from Reds RBI, as a donation for various fundraisers, and more.

In addition, he has long been a financial and public supporter of the Freestore Foodbank, whose goal is to create a hunger-free, healthy and thriving community. Well before and especially during the pandemic, Freestore has been instrumental in providing food and other essential resources to families in need. Votto has donated generously over the years and worn its gear in public settings to help raise awareness for the cause.

And at Great American Ball Park and in other MLB stadiums, Votto regularly interacts with fans. Remember this sweet story about Votto checking on a young fan after being ejected from a game?

Cincinnati Reds fans can vote for Votto to receive the Roberto Clemente Award through Oct. 3. Vote for Votto on MLB's website.

Votto has reached a number of significant milestones this season.On Votto's recent birthday, the first baseman passed former Red Frank Robinson's career home run total, good for second on the Reds' leaderboard. In August, he nabbed his 2,000th career hit, something only four other Reds players have done.

Earlier in the season, Votto achieved 1,000 runs batted in, becoming only the second National League/American League player to achieve 2,000 hits, 300 home runs and 1,000 RBIs all in the same season.

Baseball experts already are calling Votto a lock for the National Baseball Hall of Fame and Museum, commending his hitting, on-base percentage, slugging and low strikeouts.