The Reds staple is facing off in the bracket against the Pittsburgh Pirates' reuben dog. 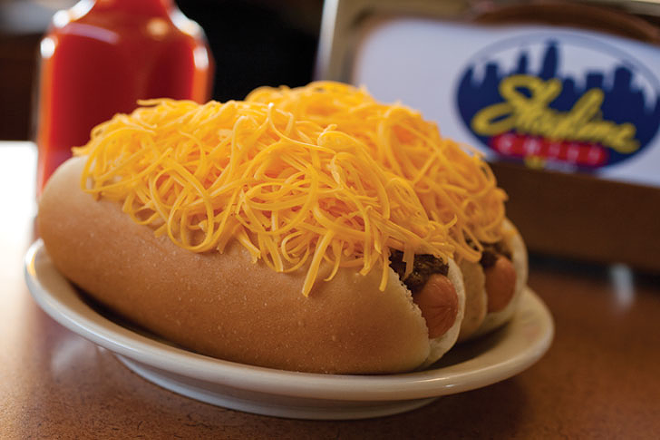 Cincinnati-style chili isn't necessarily... um... appreciated in other parts of the United States. But Queen City residents and fans may be able to change that.

Cincinnati Reds fans and gourmet enthusiasts can vote for the Queen City's own Skyline chili cheese coney to advance in Major League Baseball's "Food Fight" bracket. MLB has lined up what it says is the best food from each of the league's 30 ballparks plus two baseball standards: peanuts and Cracker Jack.

The Reds' Skyline entry from Great American Ball Park is facing off in the bracket against the Pittsburgh Pirates' reuben dog, a corned beef sandwich offered at PNC Park in Pittsburgh (CityBeat is slightly confused about why the far-more-superior Primanti Brothers sandwich or pulled-pork pierogi hoagie aren't repping Pittsburgh). If Skyline wins, it will battle the winner of the bracket that features Lobel's steak sandwich at Yankee Stadium and Boog's BBQ sandwich at Oriole Park at Camden Yards. After that, the coney would face three more culinary opponents before being crowned the winner.

Fans can vote for the Skyline chili cheese coney on MLB's bracket site through 2 p.m. Sept. 19. By voting, fans have the opportunity to win game tickets and a $1,000 gift card.

The Cincinnati Reds beat the St. Louis Cardinals 3-2 on Sept. 15 in the first game of a five-game series at home. Starting pitcher Chase Anderson notched three strikeouts and two walks over five innings for the win.

The Reds, now 57-86, were eliminated from postseason contention after losing a double-header to the Pirates on Sept. 13. As of press time, the Cardinals lead the Milwaukee Brewers by 7.5 games in the National League Central; the Reds are 26.5 games back and are the sixth-worst team in the entire MLB.

Cincinnati hosts the Cardinals through Sept. 18. The team's 2022 season-ending game will be against the Chicago Cubs on Oct. 5 at Great American Ball Park.