"The Gift" offers a beautifully wrapped present filled with care and reflection in the works on display. 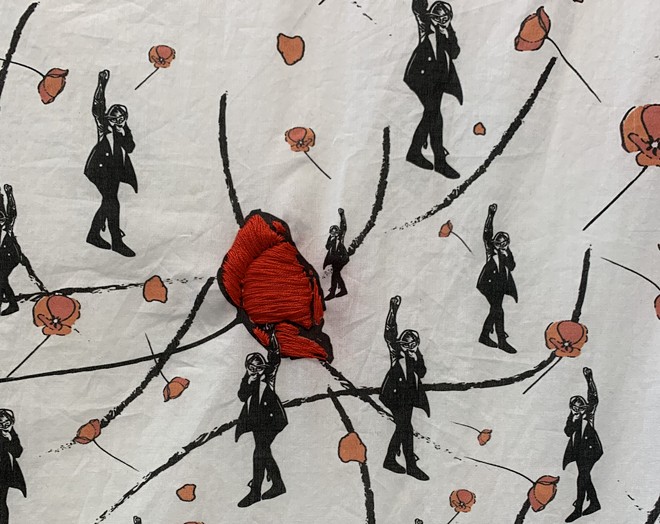 Art is the gift that keeps on giving. It gives us a way to connect, remember and reflect, and Wave Pool’s current exhibit, The Gift, offers viewers a beautifully wrapped present filled with care and reflection in the works on display.

Wave Pool is a quaint yet lively contemporary art gallery in Camp Washington. The gallery gives artists a platform for their art to be a part of the community’s social structure and change to make a difference and provide connection.

“We’re really interested in trying to make art accessible because we believe it’s such a powerful tool for changing the world,” says Maria Seda-Reeder, director of exhibitions/artist support initiatives and curator of The Gift exhibit. “What we do is try to make space for our neighbors. That’s the arts community, that’s Camp Washington, but that’s also Cincinnati in general.”

Seda-Reeder says she first thought of the idea of “the gift” as a theme for an exhibit in 2021 when the gallery was filled with bright lights and colors, which reminded her of a gift to the community.

“Part of me is always thinking about what I can pull off in this space because it’s not a typical white box as most gallery spaces are,” Seda-Reeder tells CityBeat. “I had an 18-month calendar, and I found it the other day, and I had scribbled down notes and put ‘The gift - A holiday show for the neighborhood?’”

After coming up with the theme, she needed to determine which artists had a vision that aligned with the show’s purpose.

“I think my job as a curator is to ultimately find artists who I can trust their vision, and when it comes time to surrendering because ultimately I get to say I’d like it to be in this space, but I want it to be your vision,” she says.

One of the first artists Seda-Reeder says she reached out to was Lunaz, a Cincinnati-based artist from Iran who she had worked with previously. When plans for the exhibit started, Lunaz had a different idea for what she would display, but those quickly changed in September as tensions and outrage grew in her homeland of Iran after Mahsa Amini died while in police custody.

Lunaz’s multimedia installation is a progression of an exhibit she did in 2017 and is broken into two pieces. The first part includes an audio recording featuring poetry from Táhirih Qurrat al-Ain, a 19th-century Baha’i poet and women’s rights activist in Iran, and a white cloth on a table that viewers can add their own stitching to while listening to the recording. The second part is a textile panel piece featuring an iconic image of the resistance of a girl with her face covered by a scarf, but her arm is raised in a fist of defiance.

The two-part performance piece is set up in the corner of the gallery to provide a private and contemplative space for the viewer to experience both pieces of the installation individually and as a whole.

“When this whole movement started again in September, I thought, well, the movement has been evolving since 2017,” Lunaz tells CityBeat. “They’ve gone so far — women. Mostly women are at the forefront of these protests, so I thought maybe the pieces were still relevant because they were speaking to each other. And I thought as the movement has evolved drastically, it’s time for the piece — whatever is left from the former performance piece — to kind of evolve.”

One of the new additions to the installation is the poppies on the textile panel hanging on the wall. Lunaz says she chose the poppy as they symbolize hope, remembrance, and new beginnings.

“All these flowers are the souls of those who lost their lives and the good energy,” she explains. “The message is poignant in that it’s heavy, but at the same time, I feel like there is hope because it brings change and positive change, even though it is very heartbreaking and heavy.”

Lunaz stitched the poppies on the panel over time with the help of two close friends, both women from different generations and backgrounds, which was essential to Lunaz in creating the piece.

“We started stitching these flowers to kind of put our intentions, as a simple way of putting our good intentions back home and to what they’re fighting for and evolve the piece to what it is right now,” Lunaz says.

For Lunaz, using and transforming past works in the current exhibit has a deep meaning.

“I feel like connecting the future to the past kind of gives hope,” she says. “We learn from history that this is not the end.”

Seda-Reeder says she is happy she can include Lunaz’s experiences as an Iranian woman in the exhibit.

“The show is about reciprocity, and those waves of feminism to me were showing how we can create sort of movements of love and generosity and peace in the world when we come together,” Seda-Reeder says. “When we’re not willing to say this is just my fight, or this is just your fight. And you know, we’re all on the same team. We all want freedom, creativity, and expression for the whole world.”

Lunaz says she hopes viewers will get a deeper look into life in Iran and the movement happening there now, acknowledge the struggles in her homeland and carry what they’ve learned out into the world.

“What Iranians are asking for right now is just to keep the story in the spotlight for everyone, so I thought it was relevant to the theme of the exhibition,” Lunaz says.

The exhibit includes three installation pieces from three other artists, including the archival puppet, Washerwoman, from Bread + Puppet’s show in 1979. Bread + Puppet is a globe-traveling artist group started by Peter & Elka Schumann in 1963 that believes art is as essential as bread to the world, which is why they pass out free bread at their shows. Seda-Reeder explains that the group gives out free tickets and only passes around a hat for donations to help fund shows, which allows open access to art.

“Those kinds of gestures just felt very consistent with what I was hoping to have the show be about,” Seda-Reeder says.

A compelling piece by multidisciplinary Latinx artist and educator Rebecca Nava Soto is also on display. Her multimedia piece, Speech Scroll, explores the link between indigenous people and the natural world and includes a QR code along with the work for viewers to learn more about Xinanchkalko, a collective indigenous space in Cuentepec, Morelos, Mexico, for indigenous scholars and residents.

The last of the four pieces is by multimedia artist, designer and poet Michael Thompson. His installation-based painting focuses on the challenges artists face in the world and the relationship between consumers and an artist’s ultimate gift, their work.

The Gift is on view through Feb. 25 at Wave Pool, 2940 Colerain Ave., Camp Washington. Info: wavepoolgallery.org.