Cincinnatians will join in on a series of marches springing up across the country organized by activists and survivors of mass shooting at a school in Parkland, Fla. 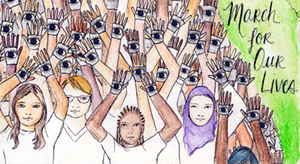 Photo: kristasuh.com/evil-eye-glove/
Krista Suh has a vision of a Sea of Eyes to protest gun violence.

Cincinnatians will join in on a series of March for Our Lives events springing up across the country on March 24, organized by activists and survivors of the Feb. 14 mass shooting that killed 17 people at a school in Parkland, Fla.

Debate has swirled once again around gun control following a steady drumbeat of tragedies across the country, including Parkland and one in Marshall County, Ky. that resulted in two deaths last month. So far this year, there have been 17 school shootings nationally.

The main March for Our Lives event will take place on March 24 in Washington, D.C., but other marches will take place the same day in cities across the country including Cincinnati, Cleveland, Columbus, Indianapolis and Detroit.

Cincinnati’s event, hosted by local groups United We Stand and the Young Feminists Coalition, will take place at a yet-to-be announced location downtown at 11 a.m. The march will proceed to the Cincinnati office of U.S. Sen. Rob Portman.

To prep for the march, local gallery and community activation center Wave Pool will be hosting an Evil Eye Glove-making session. Public Service Artists, a Cincinnati-based group of political art activists, and the Bombshells of Cincinnati guerilla knitting group are leading this engagement effort and inviting the public to come to Wave Pool to make their own Evil Eye Glove. The glove was conceived by Krista Suh of the Pussyhat Project with a pattern designed by Kat Coyle, who designed the original Pussy Power Hat for the January 2017 Women's March on Washington. Even if you can't knit, you are welcome to come to make signs.

On her website, Suh writes of the Evil Eye Glove project: "I had an idea, a vision, before (the Pussyhat). It came to me in a dream, just minutes before waking up — I had a dream of a protest, a huge peaceful crowd with their hands outstretched toward the sky — each palm had a huge EYE drawn on it. It was a Sea of Eyes. I’ve been hanging on to that image knowing that it was going to do something, mean something. Sunday morning, I got invited to the March for Our Lives Facebook page — it is a march organized by the students of the Florida school shooting. And that’s when I knew. It is time. I’m calling on you to help make the Sea of Eyes a reality. To make a statement that enough is enough and gun violence has to stop."

Suh will be in Cincinnati on April 25, appearing at the Contemporary Arts Center at 7:30 p.m. for a discussion about her new book, DIY Rules for a WTF World, and to talk about other projects. The event is free and open to the public.