What Could the Rest of a 2020 Season Look Like for the Cincinnati Reds? 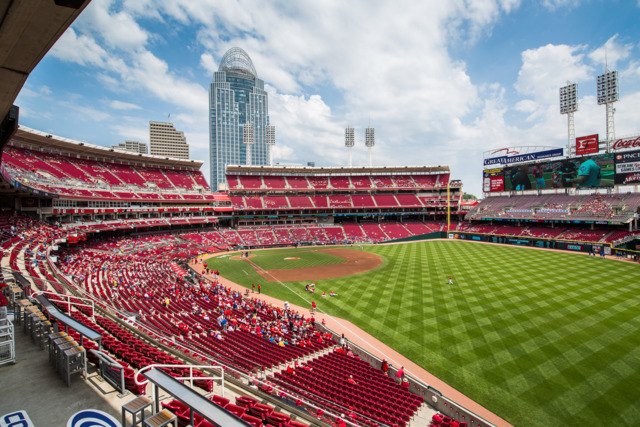 The months that the world has been without sports have left a giant gap in the lives of millions of fans around the world. For Cincinnatians, we were robbed of arguably our most beloved local holiday with the cancelation of Opening Day and the Opening Day Parade. It’s been a rough ride without the escape sports provide, but recently the MLB provided an update on the prospect of starting up the 2020 season late this summer.

The discussed plan would see 82 regular season games beginning in late June, or by the latest, July 2. Arguably the biggest shake-up laid out in the plan for the 2020 MLB season is in the dissolving of the American and National Leagues. The plan suggests a formulation of three 10-team divisions, the West, Central and East. Teams assigned to each division will be based on geographical location, as part of an effort to slow the need for teams to travel across the country.

MLB Commissioner Rob Manfred recently spoke with CNN on the prospect of reopening, saying he spoke with the governors of the 18 states that house MLB organizations who indicated they were hopeful that the MLB could resume using facilities and begin the 2020 season without fans in attendance — and with COVID-19 testing in place.

And Gov. Mike DeWine has released the state's Responsible RestartOhio guidelines for adult and youth softball and baseball.

"We're a big business, but we're a seasonal business," Manfred said. "Unfortunately, this crisis began at kind of the low point for us in terms of revenue. We hadn't quite started our season yet, and if we don't play a season the losses for the owners could approach $4 billion."

The same story also quoted MLB Players Association Executive Director Tony Clark in a statement regarding player pay and personal safety: "Players recently reached an agreement with Major League Baseball that outlines economic terms for resumption of play, which included significant salary adjustments and a number of other compromises. That negotiation is over. We're now focused on discussing ways to get back on the field under conditions that prioritize the health and well-being of players and their families, coaches, umpires, team staff and fans."

So what would this plan mean for the Cincinnati Reds?

Coming off a less than average slump over the last six seasons, the Reds have made some off-season moves that point to an effort toward maximizing the team’s potential. With the announcement at the end of last season that the team would be increasing payroll in the off-season, the room for expansion in the team’s bullpen and other needed areas showed promise for off-season acquisitions.

The Reds have indeed made some moves. They signed the highly sought right fielder and former Detroit Tiger Nick Castellanos. They also added Nippon veteran Shogo Akiyama to help in the bullpen. The added veteran presence on the team is a solid addition to a Reds squad looking to make a break in 2020.

In addition to the new signings, the Reds are also sitting on 20-year-old prospect Hunter Greene, who was selected second overall in the 2017 MLB Draft. Currently assigned to the Reds Class A developmental territory with the Dayton Dragons, the young pitcher recently went viral after a video of his throwing ability surfaced.


As Greene continues to develop his game after last year’s Tommy John surgery, the Reds are confident in looking to list the young prospect as healthy for the upcoming albeit delayed 2020 season.

That said, the Reds issued a statement May 14 saying, "The COVID-19 pandemic has rewritten the course of the 2020 MLB season. We are continuing to modify our operations to adapt to this new reality, including a combination of pay reductions and temporary furloughs for employees that will take effect June 1st. These changes involve under 25% of our employees being placed on temporary furloughs. Like many other industries negatively impacted by COVID-19, we respect the sacrifices being made by our staff at this time. The Reds are confident that baseball will be back, and that the culture the Reds have created as an organization will withstand this unfortunate disruption to our normal course of business. We continue to be prepared and ready for Reds baseball to return to Great American Ball Park."

Regardless of what happens, fans can expect the MLB to return this year. It’s unclear what the season will look like apart from the absence of fans in the stands. And although we’ll have to wait a little longer before we can grab those first ballpark hotdogs and beers, soon enough we’ll be able to watch and cheer on the Reds from our homes with the same passion as we would at Great American Ball Park.

The latest information and updates regarding the MLB 2020 season can be found at mlb.com.