For one night only, the queens of RuPaul’s Drag Race take over the Aronoff Center for the Werq the World Tour. Host Bob the Drag Queen will be joined by Season 10 winner Aquaria, plus Asia O’Hara, Kameron Michaels, Eureka, Kim Chi and Voilet Chachki. Werq the World is a theatrical extravaganza featuring lip-sync performances, costumes, comedy and song and dance. “This is a theatrical production of the highest caliber with Drag Race favorites delivering what you crave! You will leave the theater walking on air with joy. It’s a night you won’t soon forget,’ says Michelle Visage, Drag Race judge. 9 p.m. Thursday. $42.75-$62.75. Aronoff Center, 650 Walnut St., Downtown, cincinnatiarts.org.

Cincinnati Irish playwright Connor McPherson’s one-man monologue St. Nicholas is a slightly spooky and humorously droll tale about a hard-drinking and disillusioned theater critic who falls for a beautiful young actress — and a group of modern-day vampires. Cincinnati acting legend Bruce Cromer takes the stage at Ensemble Theatre for the show, with a plot described by the theater as: “A jaded theatre critic spins a tale beginning with obsession and ending with a descent into a macabre world of vampires. Is it all a drunken lie? A tantalizing fairy tale? Or is it his own version of a higher truth?” Read a review here. Through Oct. 27. $55 adult; $31 student; $27 child. Ensemble Theatre Cincinnati, 1127 Vine St., Over-the-Rhine, ensemblecincinnati.org.

ONSTAGE: 1984 at Cincy Shakes is a visceral gut punch set in a eerily familiar dystopian future. See a review and get ticket details here.

“I went to film school in New York and then hated doing movies,” says New Orleans native Mark Normand. Doing sketch comedy at night opened up a whole new world for him. “It was so much easier than doing movies. It was way more fun.” He parlayed that interest into stand-up and returned to New Orleans only to find there was a lack of venues at which to perform. “There was one show a week, sometimes two if you were lucky,” he says. “In New York there are like eight million a night.” So, he headed back to the city and really paid his dues: “I got mugged, blackout drunk, lost on the subway, my landlord died of AIDS, and I got bed bugs.” After six years in New Yok, he is able to do comedy full-time and now headlines clubs across the country and has made multiple appearances on Conan as well as The Tonight Show. Through Saturday. $12-$45. Funny Bone Liberty, 7518 Bales St., Liberty Township, liberty.funnybone.com.

Big Bone Lick Historic Site encompasses 512 acres of Kentucky parkland named after the Pleisotocene megafauna fossils found there, including mammoths, sloths and bison. The park is nicknamed the “birthplace of American paleontology” and is an official Lewis and Clark Heritage Trail Site. To celebrate its history, the annual Salt Festival features demonstrations of pioneer life. Learn frontier skills and traditions, shop a handmade crafter’s corner, listen to Bluegrass and Folk music, view prehistoric artifacts, watch blacksmiths at work, see how bison hair can be spun into yarn and discover how salt was extracted from the springs of Big Bone — the mineral is one of the reasons the site was so popular with prehistoric animals. 9 a.m.-3 p.m. Friday; 10 a.m.-6 p.m. Saturday; 10 a.m.-5 p.m. Sunday. $5; free ages 5 and under. Big Bone Lick Historic Site, 3380 Beaver Road, Union, Ky., parks.ky.gov.

Legendary and Grammy-nominated tenor Andrea Bocelli takes the stage at U.S. Bank Arena on Friday for an evening of song, accompanied by the Cincinnati Symphony Orchestra and May Festival Chorus. Bocelli has been performing for more than 20 years and has sold more than 90 million records globally. 6:30 p.m. doors; 8 p.m. show Friday. $75-$359. U.S. Bank Arena, 100 Broadway, Downtown, usbankarena.com. It’s the final City Flea of the regular season before the holiday market in December so if you want to stroll and shop, Saturday’s the day. Check out unique items from hundreds of vendors, from handmade crafts and vintage finds to artisan food items and plant studios. 10 a.m. Saturday. Free admission. Washington Park, 1230 Elm St., Over-the-Rhine, cityflea.org.

ONSTAGE: CCM’s Musical Theatre program celebrates 50 years with a staging of Broadway’s Guys and Dolls and a special gala. Read a feature story and get show and gala details here. 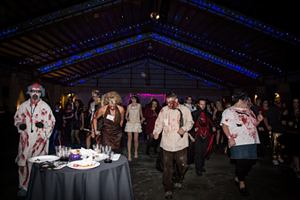 EVENT: Zombie Ball: Dance of the UnDead at Pyramid Hill

EVENT: Books by the Banks Festival

Whether you love cookbooks, fiction, comic books or have a child who loves reading, fans of any and all book genres can find something they’re looking for at the Books by the Banks festival. Check their website for a list of attending authors and the schedule for panel discussions — a chance to pose questions to some of your favorite local and nationally renowned authors. In addition to the main event, at 11:30 a.m. Books by the Banks will host the premiere of the new documentary, Saving Fiona: The Story of the World’s Most Famous Baby Hippo, based on the children’s book by the director of the Cincinnati Zoo & Botanical Garden, Thane Maynard. 10 a.m.-4 p.m. Saturday. Free admission. Duke Energy Convention Center, 525 Elm St., Downtown, booksbythebanks.org. 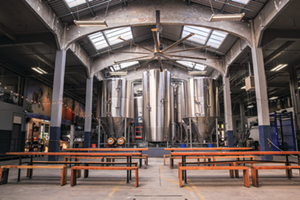 Weird brews aren’t only found in witches’ cauldrons; they’re also found in brewery taprooms. Rhinegeist is hosting Rare Beer Fest, which will showcase the most “extraordinary, unobtainable and unexpected” beers from across the country — like The Lost Abbey of San Diego, Indiana’s Upland Brewing Co., Chicago’s Half Acre Beer Co. and Other Half Brewing Co. of Brooklyn, N.Y. General admission includes 10 five-ounce samples and a tasting notebook. Bump up to VIP and you can snag a commemorative glass, four additional tastings with food pairings and exclusive info. Session one noon-4 p.m.; session two 6-10 p.m. Saturday. $40; $65 VIP. Rhinegeist Brewery, 1910 Elm St., Over-the-Rhine, rhinegeist.com.

Want to celebrate All Hallow’s Eve early? Circle of Mother Earth, a close-knit pagan community, hosts this one-night Cincinnati Witches Ball. “Where Mobsters and Monsters Collide” is this year’s theme, so come whether you’re from the mafia’s underbelly or from under the bed. But, any costume goes. Peruse vendors, munch on appetizers, join the split-the-pot and get your fortune read. And hey, someone might just put a spell on you. 18 and up only. 7 p.m.-2 a.m. Saturday. $25 single; $40 couple; $75 group of five. Thompson House, 24 E. Third St., Newport, Ky., circleofmotherearth.org.

October’s second Tea Dance takes place at the American Sign Museum. The tea dance is a revived LGBTQ tradition that dates back to the 1940s and ’50s. Richard Cooke and his husband Marty Wagner brought them to Cincinnati in April 2017 with new life. Each month, the dances unfold at a different bar, but always on a Sunday afternoon. Historically, tea dances functioned as an event in which gay couples could openly dance with one another. In the 1940s and ’50s it was illegal for same-sex couples to dance and touch in public, so they had to go underground. This month’s Tea Dance takes place among the neon signs of the museum with special cocktails and DJs. 4-7 p.m. Sunday. Free admission. American Sign Museum, 1330 Monmouth St., Camp Washington, facebook.com/teadancecinci. Findlay Market’s Fall Food Fest celebrates autumn edibles with themed treats ranging from apple cider and cinnamon-flavored desserts to caramel apples and pumpkin pie. Participating vendors include Babushaka Pierogies, who will be slinging sweet potato pierogies; Gramma Debbie’s, with mulled cider; Dean’s Mediterranean Imports, with pumpkin ravioli; Maverick Chocolate with pumpkin pie truffles; and more. Tickets (one for $2; six for $10; 15 for $20) get you access to a variety of treats. Get beer from the biergarten or a bourbon cider cocktail; listen to live music; and kids can participate in a spooky scavenger hunt or pumpkin painting. 10 a.m.-4 p.m. Sunday. Free admission. Findlay Market, 1801 Race St., Over-the-Rhine, findlaymarket.org.