'Whose Line is it Anyway?' Stars to Host Live Improv Show at Cincinnati's Aronoff Center

UPDATE: Colin Mochrie and Brad Sherwood's Scared Scriptless show has been rescheduled to Tuesday, May 26. 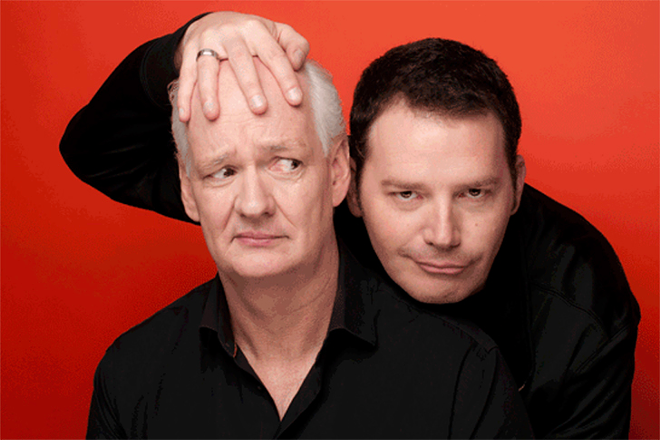 Improv comedy has played a huge role in the backgrounds of many of comedy’s biggest stars — troupes like Second City, the Groundlings and, more recently, UCB have essentially served as the minor leagues for Saturday Night Live since the program’s beginning.

But the peak exposure for the art form itself (SNL, obviously, is scripted) was Whose Line Is It Anyway?

The Drew Carey-hosted version of the show that began in the late ’90s and ran on ABC found such a huge and dedicated audience, it’s a wonder improv TV programs never became a trend. The U.S. Whose Line was a spin-off of the original UK version, which was also wildly popular. That British version (which also spawned Israeli, Dutch and Australian WLIIA?s) featured some comedians who would go on to become a big part of the U.S. version, including Colin Mochrie and Brad Sherwood, who have also been a part of the Who’s Line reboot on The CW.

The pair is kicking off the latest leg of their Scared Scriptless tour in Cincinnati. The show is 100 percent improvised with audience members directing the proceedings with suggestions and sometimes even joining the comedians on stage.

UPDATE: The Scared Scriptless show has been rescheduled to Tuesday, May 26.