Hint: It's because of their "Kimono: Refashioning Contemporary Style" exhibit

In a strange turn of events this week, the disparate worlds of the Cincinnati Art Museum and Kim Kardashian West have collided.

The reason for overlap? The term "Kimono."

Kardashian announced on June 25 via Twitter that she had planned to name her new Spanx-esque shapewear line Kimono, which borrows from the word for the traditional Japanese garment. She drew backlash for the move from the Mayor of Kyoto. And as of July 1, she took to Twitter again to apologize and say her brand will now launch under a new name.

Kardashian's controversy just so happens to coincide with the CAM's newly-opened Kimono: Refashioning Contemporary Style ticketed exhibition. Organized in partnership with The Kyoto Costume Institute and the Asian Art Museum in San Francisco, it explores the kimono's lasting impact on fashion worldwide from the 1870s to present day.

Because of the overlap, Jill Dunne, CAM's director of marketing and communications, says that both The Guardian and tabloid TMZ have reached out to them and the Asian Art Museum to discuss the cross-cultural legacy of the kimono.

"I was surprised at the choice of the name," says Cynthia Amnéus, CAM's curator of Fashion Arts and Textiles, upon hearing Kardashian's announcement. "Shapewear and kimono essentially have nothing in common. Although kimono can seem confining, when this traditional Japanese garment was introduced to the West in the middle of the 19th century, it was admired because of its expansive cut and looseness. The Japanese speak about an admired attribute called ‘ma’ — space between the body and the garment. This does not seem compatible with shapewear that confines and shapes the body."

The CAM's exhibition, which opened June 28, boasts over 50 pieces — from textiles to shoes, paintings and prints. It walks visitors through the early and contemporary influence of Japanese art and fashion on the Western world. One early piece — a gray-blue silk kimono that dates back to the mid-19th century — depicts blossoming trees, red and yellow peonies, finely detailed waterfalls and a whimsical komainu (lion-dog) traversing through the landscape. It serves as an example of the kind of pieces that were collected by Western artists at that time.

When asked how designers respectfully pull inspiration from another culture, Amnéus says that those featured in the exhibition used motifs, silhouettes and specific techniques that embellish their fabrics to emulate the kimono. And many, she says, were or are collectors of Japanese prints and textiles.

"They admire Japanese design and were inspired by it, creating versions that are their own yet pay homage to the original source," she says. "Many artists have done this and couturiers are artists in their own right, pulling inspiration from various cultures and to create different styles. They do not simply adopt the name of a garment."

Kardashian's decision to change the name came, in part, after the Mayor of Kyoto penned an open letter asking her to reconsider the name while also explaining the kimono's rich tradition in Japanese culture.

"In recent years, we see not only Japanese but also many foreign tourists wearing Kimono and strolling around in Kyoto and cities in Japan," he wrote. "It is proof that Kimono, that we are proud of as our traditional culture, is loved by people from around the world."

Kardashian — who has over 60 million followers on Twitter alone — also noted in her apology tweet that she is always "listening, learning and growing" to the perspectives that people bring to her. 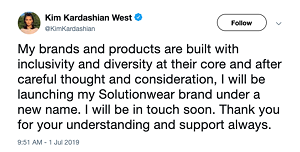 Dunne says that, because of Kardashian's large following, the CAM hopes that the situation can open up a larger conversation and that their exhibition can provide a teaching moment about the cross-cultural impact of the kimono.

"Creating this type of understanding is part of our core at the museum," she says. "The fact that the kimono is being discussed in popular culture at this moment when we have an exhibition exploring the topic is a great opportunity. I hope that even a small part of Kim Kardashian’s millions of fans are willing to visit the Cincinnati Art Museum to see this exhibition."

Amnéus notes that the response thus far to the exhibition has been positive. And though it usually costs $10 ($5 for students, seniors and youth), visitors will get a chance to see it for free on July 4 from 11 a.m. to 8 p.m. Kimono: Refashioning Contemporary Style will be on display through Sept. 15.