With Joe and Gordon commanding much of the first season of ’80s tech drama Halt and Catch Fire (Season Premiere, 10 p.m. Sunday, AMC) — which ended quite disastrously for the characters — it onl 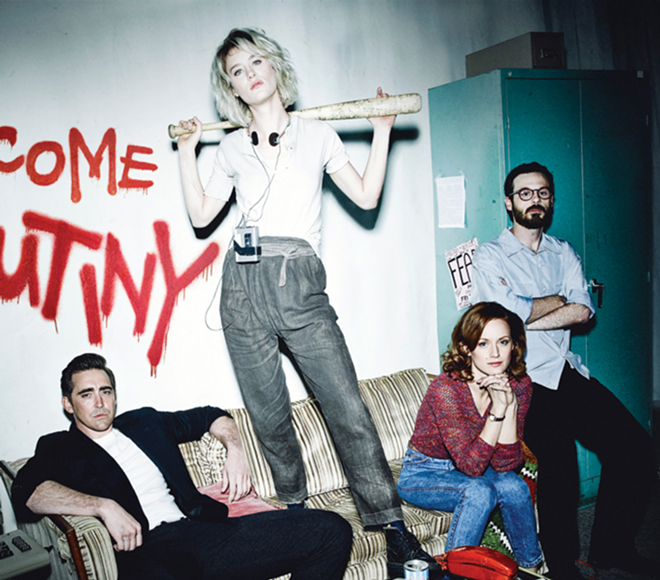 With Joe and Gordon commanding much of the first season of ’80s tech drama Halt and Catch Fire (Season Premiere, 10 p.m. Sunday, AMC) — which ended quite disastrously for the characters — it only makes sense that this season focuses more on Cameron and Donna. Besides infiltrating the boy’s club of the early tech world (and just being underutilized, interesting characters), the women are building their own gaming startup, Mutiny.

While we caught a glimpse of the early company last season, more than a year has passed, and Mutiny is now a full-fledged operation working out of a frat house of an office building. Subscribers use the service to play video games on a hosted network. Cameron naturally pushes to use the company’s tiny budget to acquire new games, but as Donna observes more and more subscribers using the service to chat online, she envisions something even greater.

Of course, the guys aren’t out of the picture. After Joe’s explosive exit from Season One, he took a sabbatical and has returned with big ambitions. He’s got a fiancée (Boardwalk Empire’s Aleksa Palladino) and a new gig working for her father (James Cromwell).

Donna’s husband Gordon stuck around at Cardiff for another year but has little to show for it. When he reunites with Joe in Sunday’s premiere, he decides to give him another shot once Cardiff sells.

Finally, Bosworth is fresh out of prison and ready to get back to work — at Mutiny.

The Comedians (10 p.m., FX) – Josh attends the charity event of a girl he likes; Billy gets in an uncomfortable situation with a homeless man.

Nightingale (Premiere, 9 p.m., HBO) – David Oyelowo stars (pretty much single-handedly) as a downward-spiraling veteran eagerly awaiting a visit from a friend he served with in this HBO original.

The Secret Life of Marilyn Monroe (Premiere, 8 p.m., Lifetime) – Poor Marilyn. After a lifetime of struggles and success followed by an untimely death, the actress has been reduced to improperly attributed quotes on the Internet and this Lifetime two-part miniseries.

Veep (10:30 p.m., HBO) – With Selina ill, Gary organizes a secret meeting with Amy and Dan in an effort to block the president’s bill.

RuPaul’s Drag Race (Season Finale, 9 p.m., Logo) – The queens of Season Seven reunite onstage and rehash the show’s drama. Then, either Ginger, Pearl or Violet will be crowned America’s Next Drag Superstar!