The situation clearly was tolerated — and must have been thought to be funny — until a parent from another team played whistleblower with a Facebook post. 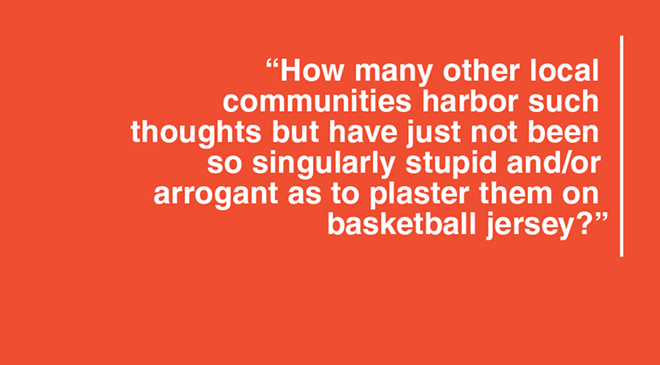 For the past 36 hours I’ve been unable to stop thinking about Walt Gill.

I don’t really know Walt Gill. Only his name, that he has been a volunteer basketball coach in the Kings community northeast of Cincinnati and that a reprehensible action has been attributed to him.

Who are you in a larger sense, Mr. Gill, and what were you thinking? Is it somehow not primarily your fault that over the last month you had your high-school-age youth basketball players in at least two games and probably as many as four with uniforms professionally made to be blatantly racist?

With names on the back of jerseys that included “COON” and “KNEE GROW”?

I’m so curious that as I write this, I find myself wondering where Mr. Gill is and what he is doing right now. It appears he’s in hiding, as reporters have been unable to reach him since news of this broke early this week. His league did release a very short statement of apology on his behalf, but it was totally boilerplate, illuminating nothing. And the absence of anything more makes it appear there may be no ameliorating backstory to all this. Makes it appear that Mr. Gill — and others who must have been involved (like players’ parents?) — somehow thought this was funny and would not wind up destroying the team.

Which it has, of course. The team has been kicked out of its league and disbanded by its umbrella organization, Cincinnati Premier Youth Basketball. The team was comprised of Kings High School students and had arrangements to use school district facilities, but it was not affiliated in any official way with the schools. The organizers and the schools appear to have acted forthrightly and correctly, at least after the fact.

But still we virtually cry for more knowledge about this. Stories that come out through sports — even local youth sports — have a special way of grabbing public attention, and this story has gone national, appearing in USA Today, on Yahoo and on Deadspin.

But thus far without a significant word from Walt Gill. Or from any of the players’ parents except one Kerry McKiernan, an erstwhile Kings school board member who spoke tearfully about the situation as he publicly resigned Jan. 9.

But this “thing” clearly was tolerated — and must have been thought to be funny — until a parent from another team played whistleblower with a Facebook post. That laudable action by West Clermont team parent Tony Rue resulted in the Kings team’s game at West Clermont being interrupted and then canceled. That was, however, Kings’ fourth game of the season, and the team apparently had played its first three games with the offensive duds.

(Before going further, it should be noted again that Kings schools did not sponsor or run the team. The team’s official name was, if you can believe this, “THE WET DREAM TEAM” — and it was printed on the front of the jerseys. But puerile and tasteless as that may be, it pales in comparison with the egregiousness of the racist fake player names. Also, while we’re in these parentheses, let’s note that though I’ve been unable to confirm the Wet Dream players and coaches are all white, the 2010 Census found the Kings area to be more than 95 percent white and just 1.4 percent black.)

Jason DiTullio, the coach of a Milford team that played at Kings in December, has since come out to say he was offended by the uniforms and that he said so to Walt Gill and to a player wearing “KNEE GROW.” But he says he got only a derisive response, basically “Can’t you take a joke?” and he says he faults himself in hindsight for not pursuing the matter further.

So we’ll give Mr. DiTullio a grade of “C” on this. We’d agree he should not have let it go as he did, we’d hope that we ourselves would have done more. But we weren’t there, and we don’t know how chickenshit we might have been, and at least he did and said something.

But, again, I’m almost pulling my hair out and screaming to the Kings team and its families, “WHAT COULD YOU POSSIBLY HAVE BEEN THINKING?” McKiernan in his resignation comments said, “I know the boys did not intentionally want to hurt anybody,” but sorry, that comes off as facile and totally inadequate.

And please don’t think this was just an expression of bigotry that, bad as it was, wasn’t threatening to any particular individual. Looking at the Facebook page of whistleblower Tony Rue, I saw he was attacked with comments like this:

“The Wet Dream Team is in the right. Tony Rue is just a big fucking pussy!”

“You look like a bitch. You’re probably that one parent that wants Participation Trophies because your son sucks and because the only way he’ll ever be able to play is when you pay to put him on a team.”

I reached Rue earlier this week and thought I had an appointment to speak later on the phone. But he seems to have since had second thoughts, and who could blame him? But in his curtain-raising Facebook post, Rue had said: “This isn’t a typo, this isn’t a mistake, these are ideas that were thought of, discussed, agreed upon by adults and kids alike, printed on uniforms...and no one thought this was a bad idea or inappropriate? It was so blatant that it had to be fake. Sadly it wasn’t."

Damn straight, Tony, and the reason this little Cincinnati sports story is so darkly and widely compelling is that we fear it scratches a veneer from a team and community culture that can now be perceived as racist to an unthinking core. Maybe Walt Gill and the parents weren’t going so far as to plan a field trip to cheer on Richard Spencer at the University of Cincinnati this spring, but it is beyond dispiriting to think that they — including the now-remorseful Kerry McKiernan — could have been so clueless and tone deaf.

So as we approach the 33rd year of the national Martin Luther King Day holiday, we are sadly left to wonder: How many other local communities harbor such thoughts but have just not been so singularly stupid and/or arrogant as to plaster them on basketball jerseys? And, of course, we worry ever more about such people being emboldened by the rise of overt white supremacy under our current president.

None of it is any fun, and still we wait to possibly hear more, in hope this is somehow not as awful as it seems.