Turns out feral hogs are actually assholes and it's open season year-round in Ohio, as long as you have a valid hunting license 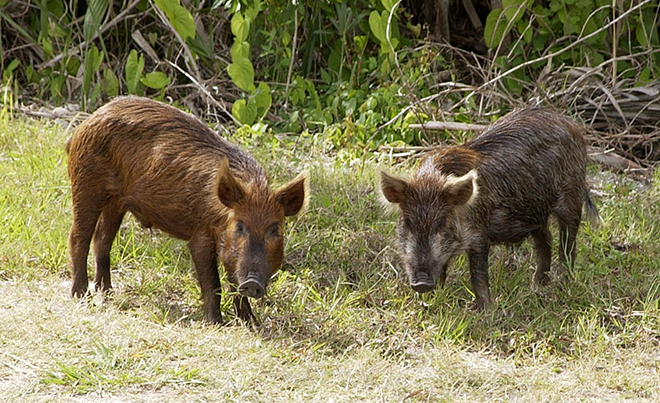 The internet has lost its mind over feral hogs — specifically 30 to 50 of them.

If you’re on here arguing the definition of “assault weapon” today you are part of the problem. You know what an assault weapon is, and you know you don’t need one.

Which led to a specific reply from one William McNabb:

Legit question for rural Americans - How do I kill the 30-50 feral hogs that run into my yard within 3-5 mins while my small kids play?

Which then led to general confusion about why this man had so many hogs entering his yard and in such a short time frame.

Jokes were made, many hilarious. But then things turned serious when news outlets got down to business uncovering the real danger behind FERAL SWINE.

It turns out feral swine are real assholes. A genetic mashup of domestic pigs and Eurasian wild boars, these beasts exist in at least 35 states, including Ohio, and cause damage to crops, property and, yes, small kids playing in yards.

They can weigh between 125 and 200 pounds, have tusks and, according to the author of Wild Pigs in the United States, have killed 84 people between 2007 and 2017 (far less than assault weapons, but...). According to the Centers for Disease Control and Prevention, there are over 24 diseases humans can get from wild boars and 37 parasites.

The Ohio Department of Natural Resources says that in the year 2000, feral swine caused about $800 million in damages to crops and property annually — and their population numbers have drastically increased since then (swine mature at eight months and can have two litters of up to 10 piglets a year.) The ODNR doesn't have a full population estimate because the public is not required to report sightings, but in 2013 there were an estimated 5 to 6 million wild boar across the U.S. The swine will go after everything from corn and soybeans to watermelon, turnips and timber. And since they are rooters, they will dig giant holes searching for food and to create places to wallow, causing additional damage to crops and property as well as severely damaging "downstream water quality through silt deposition and bacterial contamination," says the ODNR. They're also omnivores and will eat the babies of white-tailed deer and other livestock because, again, they are assholes.

Which is all to circle back to say, maybe McNabb had a point: How the hell do we kill those 30 to 50 feral hogs?

In Ohio, not with an assault rifle, but you can kill them with:

And not just 30 to 50. You can kill as many goddamn hogs as you want, anytime you want.

As of the end of 2016, the ODNR says feral swine have been found on public land in Adams, Ashtabula, Athens, Belmont, Gallia, Hocking, Jackson, Lawrence, Monroe, Ross, Scioto and Vinton counties.

"Thus far, eradication efforts have focused on smaller, emerging populations in the northern half of Ohio with great success," says the ODNR. "Currently, no large-scale eradication efforts are being conducted in those counties with known breeding populations. Hunters can aid in removal of swine and are encouraged to do so as opportunities arise. There is no closed season on feral swine.

"Ohio’s hunters are encouraged to harvest any feral swine they encounter in the wild to limit the spread of swine populations. Feral swine are primarily nocturnal, spending their days resting in dense vegetation or wallowing in mud holes. These nuisance animals may be legally harvested year-round by hunters with a valid Ohio hunting license or by landowners on their own property."

Basically, as long as you have a hunting license, it's a free for all on those feral hogs. Just remember to cook their meat to an internal temperature of 160 degrees Fahrenheit to avoid their 30 to 50 diseases.