Kick off your celebration with a Pre-New Year's Eve Lingerie Show and Benefit at Brush Factory; travel back to the 14th century at the Boar's Head & Yule Log Festival; finally count down the last seconds of 2016.

Check out our New Year's Eve listings for even more parties, events, dinners and drinks to wrap up a cringe-worthy year.

Can’t wait to get 2016 over with? Drink the year away a day early at the Christian Moerlein Malt House. Celebrate New Year’s Eve Eve with an authentic German buffet of bretzel, schnitzel, jägersoße, rotkohl, wurst, sauerkraut and spätzle, accompanied by plenty of beer and live music by Prost. The night also includes a tour of the brewery and one drink ticket (with more alcohol available for purchase). 7-10 p.m. Friday. $35. Christian Moerlein Brewing Co. Malt House, 1621 Moore St., Over-the-Rhine, bit.ly/2hr9lz7. 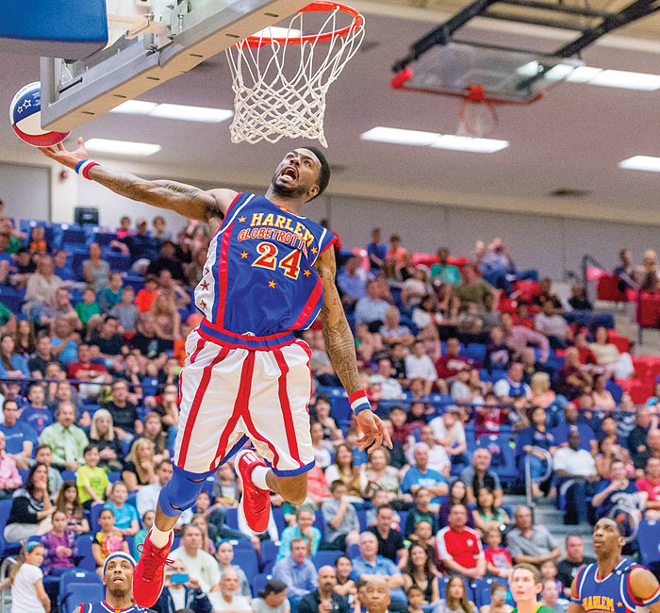 Nothing brings together sports die-hards and cynics quite like the Harlem Globetrotters, whose comedy, theatrics and athleticism combine to form something far beyond your typical basketball game. The team brings its 2017 World Tour to U.S. Bank Arena, where audience members can expect a star-studded roster, “ball-handling wizardry” and plenty of surprises. Stick around after the game for autographs and photos with the players. 2 and 7 p.m. Friday. $15-$130. U.S. Bank Arena, 100 Broadway St., Downtown, harlemglobetrotters.com.

Jon Reep, in his pre-standup comedy days, was attending a Carolina Panthers football game with some buddies. As music played in the stadium during timeouts, he would get up and dance. Eventually, the team’s official mascot invited him down onto the field as the crowd cheered. But the cheers soon turned to boos, not because the fans disliked his shenanigans, but because the cops were hauling him off the field. Encouraged and exhilarated by the crowd response to his antics, Reep soon went to a comedy club, got up on stage and started telling jokes. He quit his day job as a television production assistant and went into comedy full time shortly after that. Onstage, he talks about the subjects he knows best: beer, football and growing up in rural America. “It’s not easy living in Los Angeles and being from the South,” he tells an audience. “They hear my accent… and they’re just waiting for me to say something like, ‘What are shoes for?’ ” Show times Thursday-Saturday. $20. Funny Bone Liberty, 7518 Bales St., Liberty Township, 513-779-5233, liberty.funnybone.com.

The owners of Over-the-Rhine’s two newest storefronts — Rosie Kovacs of the furniture/home goods design store Brush Factory and Melissa Lieb of the eco-conscious lingerie store Swoon — have teamed up with Parlour hair salon’s Jessie Hoffman for a one-night fashion show. The Brush Factory will play host at its newest location, which just opened earlier this month, Swoon will dress models in its low-impact wares and Parlour will handle all the hair and makeup. All proceeds from drink donations and $5 raffle tickets (for an assortment of products from all three businesses) will be donated to the Planned Parenthood Action Fund. Show starts at 10:20 p.m. Friday. Free entrance. Brush Factory, 1417 Main Street, Over-the-Rhine, more info here.

Wild boars were once considered ferocious beasts and were hunted as public enemies. When Christian beliefs overtook pagan customs, the presentation of the animal’s head at Christmastime came to symbolize the triumph of Christ over sin. Enter the Boar’s Head & Yule Log Festival, first celebrated in 1340 and brought to Cincinnati in 1940 — its 600th anniversary. Christ Church Cathedral keeps the tradition alive with a cast of more than 250 dressed as historical characters who sing carols, perform ceremonies and present a garnished hog’s head, all of which remain authentic to the 14th century. 5 p.m. Saturday; 2:30 and 5 p.m. Sunday. Free; tickets first come, first served at the door (arrive early). Christ Church Cathedral, 318 E. Fourth St., Downtown, boarsheadfestival.com.

With an entrancing style accurately self-described as “Sci-Fi Middle Eastern Fusion,” New York City instrumental trio Consider The Source is one of the more engaging modern Progressive Rock bands going. While listening to some Prog groups is like the aural equivalent of doing a long math equation, Consider The Source stands out by imbuing its technically dazzling musicianship with emotive textures and shades of varying music styles, resulting in a sound that works on multiple levels. The group’s fusion of genres — the music is steeped in Jazz, Prog, Classical and Middle Eastern concepts — is done so imaginatively and skillfully, Consider The Source has attracted a devoted fan base that is accordingly diverse; its global tours attract Jazz enthusiasts, metalheads, Jam-band scenesters and other generally curious and open-minded listeners. The band’s local tour stop is a New Year’s Eve opening slot for popular improvisational Electro/Rock/Funk/Jam/Etc. adventurers Dopapod, which also plays Madison Theater on Friday night. 9 p.m. Saturday. $20-$30. Madison Theater, 730 Madison Ave., Covington, madisontheateronline.com.

A perfect place to party at the end of the year — especially if you don’t feel like driving home. Head to Hotel Covington, where dinner service will be available at the in-house Coppin’s until 10 p.m., featuring special New Year’s Eve dishes followed by a party in the lobby. The no-cover fête includes a NYE drink menu and specials with four bars, a DJ, dance floor, complimentary hors d’oeuvres, party favors, midnight surprises and tons of bubbly. If you’re looking to stay the night, make sure to reserve a room in advance. 8 p.m.-2 a.m. Saturday. Free admission. Hotel Covington, 638 Madison Ave., Covington, hotelcovington.com.

Get jazzed for this copacetic speakeasy fit for the late, great Jay Gatsby. CityBeat and Know Theatre’s 8th-annual fête ends 2016 with a trip back in time where you can bust out your best bell-bottoms, fedoras and flapper dresses. Back-room games, appetizers and giggle juice whittle down the seconds until 2017, topped off with a complimentary champagne toast at midnight. 8 p.m.-1 a.m. Saturday. $40 in advance; $50 door. Know Theatre, 1120 Jackson St., Over-the-Rhine, knowtheatre.com.

It’s no secret: 2016 sucked. Thankfully, Queen City Radio is offering a cure for that unavoidable NYE hangover with brunch from the Sunny Side food truck and, if you’re brave, some additional booze: five for $12 Miller Lite buckets will be available at the bar. Donate toothbrushes, toothpaste, shampoo, deodorant and/or cleaning supplies to Caracole, a nonprofit assisting individuals living with HIV/AIDS, and receive a raffle ticket for a prize. Noon-4 p.m. Saturday. Free admission; donations suggested. Queen City Radio, 222 W. 12th St., Downtown, qcrbar.com.

Voted one of the best and most authentic beer gardens (aka biergartens) in America, Mecklenburg Gardens — a local Bavarian gem in operation since 1865 — rings in 2017 German-style with a live stream of the Brandenburg Gate fireworks in Berlin. Welcome the New Year early at 6 p.m. Zinzinnati time, or midnight in Munich, with authentic German beer, a champagne toast, a balloon drop and a traditional German buffet, which includes Oktoberfest chicken and other family-friendly dishes. RSVP required. 4:30-9 p.m. Saturday. $32. Mecklenburg Gardens, 302 E. University Ave., Corryville, mecklenburgs.com.

21c Museum Hotel teams up with IRL Gallery and Modern Makers for this avant-garde party that toes the line between fantasy and reality. Museum and event spaces will be filled with music, video and cutting-edge art, including a pop-up exhibit of virtual reality- and time-based media works. Tickets include an open premium bar and appetizers from Metropole. Music by DJ Direct Deposit and DJ Sabastooge. 9 p.m. Saturday. $150. 21c Museum Hotel, 609 Walnut St., Downtown, 21cmuseumhotels.com.

NYE: SPEAKEASY AT THE TAFT THEATRE

Kick it up Roaring ’20s style at the historic Taft Theatre with the Cincinnati Pops. Guests will be transported back in time with the swinging tunes of the 1920s and ’30s, played by The Pops and Hot Sardines Jazz band. The concert runs until 10 p.m., when the speakeasy opens just in time for a martini and to watch the ball drop. Beads, boas and other ’20s regalia are encouraged. 8 p.m. Saturday. Tickets start at $25. Taft Theatre, 317 E. Fifth St., Over-the-Rhine, cincinnatisymphony.org. 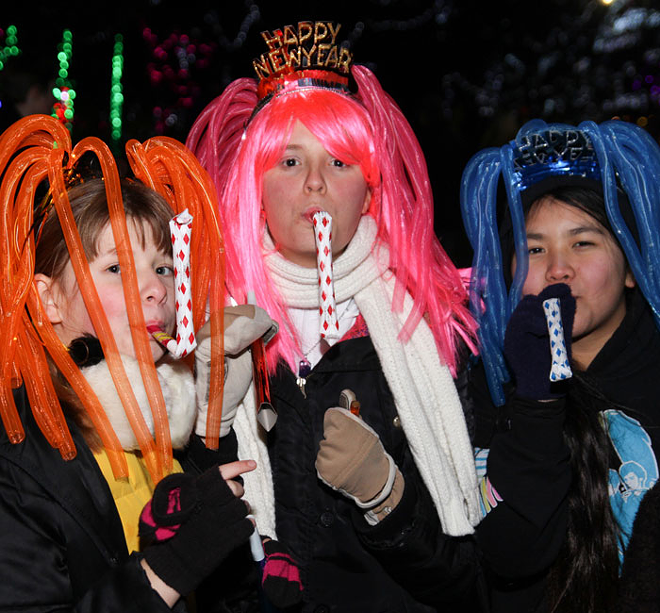 An early countdown for party animals young and old. Explore the Festival of Lights one last time before it closes Jan. 1 and discover party favors and costumed characters throughout the zoo, including Father Time and Baby ZOO Year. Madcap Puppets will also present their Winter Wondersshow at 6:30, 7:30 and 8:30 p.m. Count down to 2017 at 8:55 p.m. and stick around for a Rozzi’s Famous Fireworks display. 5 p.m. Saturday. Free with zoo admission: $18 adults; $13 children and seniors. Cincinnati Zoo & Botanical Garden, 3400 Vine St., Avondale, cincinnatizoo.org.

NYE: CHEERS TO THE NEW YEAR AT RHINEGEIST

Fair warning: Presale tickets are already sold out for this event. A few hundred will be left for sale at the door, and if you like beer, tacos and live music, you’ll want to be one of the lucky ones to snag a spot. Rhinegeist is ready to welcome 2017 with beer, wine, cocktails, Mexican eats from Gomez Salsa and a balloon drop at midnight. On the main floor, DJs Matt Joy and Will Ross will be playing a parade of hits, while upstairs in the speakeasy, Jess Lamb will be performing a steady dose of Jazz and Soul live with her band. Dress in your snazziest threads; they’ll have a coat check.8 p.m.-2 a.m. Saturday. $20 at the door if available; pre-sale sold out. Rhinegeist, 1910 Elm St., Downtown, rhinegeist.com.