The 'Phantom of the Opera' continues through Sunday at the Aronoff; Hip Hop star Cal Sruby comes home for the holidays; the 107th Thanksgiving Day Race takes off at Paul Brown Stadium.

ONSTAGE: THE PHANTOM OF  THE OPERA

He signs his imperious notes “O.G.” — for “Opera Ghost.” But we know him as the tortured Phantom. He’s haunting the Aronoff Center for a few more days, still trying to capture the heart and advance the career of Christine, his protégée. This newly designed touring production has changed from what you might recall if you’ve seen Phantom in New York or on previous tours. Lavish costumes, eye-popping sets that twist and open and, of course, that spectacular chandelier, dangling from the Procter & Gamble Hall’s high ceiling. The special effects are a big part of the storytelling, and they are dazzling. Through Sunday. Tickets start at $44. Aronoff Center for the Arts, 650 Walnut St., Downtown, 513-621-2787, broadwayincincinnati.com.

Start a new holiday tradition and pre-game Thanksgiving with Art After Dark at the Cincinnati Art Museum. On the night before Turkey Day, enjoy free bourbon tastings, guided tours and live music from Americana band The Part-Time Gentlemen before your visiting relatives kill your brain cells with their inability to understand our damned modern PC culture. This event is themed around the current Kentucky Renaissance exhibit, which features photographs, prints, books and other work created in Lexington, Ky. during the third quarter of the 20th century. The anchor of the exhibit is a display from the Lexington Camera Club, an organization that was fervent about the craft of photography. 5-9 p.m. Wednesday. Free admission; appetizers and drinks available for purchase. Cincinnati Art Museum, 953 Eden Park Drive, Eden Park, cincinnatiartmuseum.org.

Rising Hip Hop star Cal Scruby is coming home for the holidays, but he’s putting a little work in on the night before Thanksgiving. Now based in Los Angeles, the Cincinnati native and Ohio State University graduate plays a homecoming show at Bogart’s on Thanksgiving eve, just over a year after releasing his breakthrough House in the Hills EP, which featured a collaboration with singer Chris Brown, “Ain’t Shit Change,” and the White Men Can’t Jump-parodying video for it which has notched 4.5 million views on YouTube in the past 10 months. On social media, Scruby says he’ll be announcing details of his next release at the Cincinnati show, which will also feature performances by DJ Etrayn, Yates Bruh, Nuk, DJ Kev the Goon, Alexander Dreamer and Nyzzy Nyce. 8 p.m. Wednesday. $15. Bogart’s, 2621 Vine St., Corryville, bogarts.com.

Rhinegeist's weekly Charitable Suds event goes supersized with this holiday party. A portion of the evening's proceeds will go to benefit Fall Feast, one of the largest free Thanksgiving meals and health events in the area (Thursday at the Duke Energy Convention Center). Chicken Mac Truck will be on hand to serve up tasty grub and DJ Soul Step will be spinning. 5 p.m.-midnight Wednesday. Free admission. Rhinegeist, 1910 Elm St., Over-the-Rhine, rhinegeist.com.

EVENT: THANKSGIVING ROCKIN' EVE WITH THE ALMIGHTY GET DOWN

Head to the 20th Century Theater for the fourth-annual Thanksgiving Rockin' Eve, to benefit the Oakley Community Food Bank. The Lovers open for The Almighty Get Down. 7 p.m. Wednesday. $12 advance; $14 door; $2 off with a donation. 20th Century Theater, 3021 Madison Road, Oakley, the20thcenturytheatre.com.

Everyone's back in town for Thanksgiving, so reunited with friends and family (and maybe some high school people you want to avoid) at Taft's Ale House. The bar will tap bourbon barrel-aged Beep Bop Boop weizenbock at 6 p.m., followed by Thanksgiving trivia (for prizes) and DJ Storm in Nellie's, with discount drinks. 6 p.m. Wednesday. Free admission. Taft's Ale House, 1429 Race St., Over-the-Rhine, facebook.com/taftsalehouse. Cincinnati has many traditions, including the annual Thanksgiving Day Race. According to Runner’s World Magazine, the race began in 1908, making it the sixth-oldest marathon in the country, right behind the Boston Marathon. This year will be the 107th time the race has been held in Cincinnati. The Half K Kids Run will kick off the morning at 8:25 a.m., followed by the official 10K run/walk at 9 a.m., starting and ending at Paul Brown Stadium. Afterward, hit up the finish line festival to scarf snacks before your Thanksgiving feast. This race also lives up to its benevolent name, benefitting multiple area charities including Ronald McDonald House, Girls on the Run, Alzheimer’s Association and more. 9 a.m. Thursday. $38 registration. Paul Brown Stadium. 1 Paul Brown Stadium, Downtown, thanksgivingdayrace.com.

TV: GILMORE GIRLS: A YEAR IN THE LIFE

Thanksgiving break offers a plethora of opportunities for themed programming and binge-watching, including the release of Gilmore Girls: A Year in the Life. Premieres Friday on Netflix.

Black Friday is definitely not the prettiest holiday. It’s hard to grab those bargain deals when there are ridiculously long lines and ferocious consumers willing to do anything for a discounted iPhone. If you’re fed up, Park + Vine — which will be closed on Black Friday — is offering the opportunity to show your discontent with rabid consumerism by spending the morning enjoying a leisurely walk around our beautiful city during the second-annual Plaid Friday Urban Hike. Attendees (who are encouraged to wear plaid) will be welcomed with coffee and cheer before they embark on an eight-mile hike through downtown’s most beautiful and historic neighborhoods, stopping to appreciate the gorgeous views. Includes a packed lunch. Dogs and children welcome. 10 a.m.-1 p.m. Friday. $15. Leaves from Park + Vine, 1202 Main St., Over-the-Rhine, parkandvine.com.

EVENT: ALE TO THE QUEEN CITY

Warm up on this likely chilly Thanksgiving weekend by sampling a few (or more than a few) hearty winter beers from Cincinnati’s local breweries, including Blank Slate, Rhinegeist, Taft’s Ale House, Streetside, Woodburn and more. Ale to the Queen City not only features craft beers, but also live entertainment and signature Cincy foods, like LaRosa’s and Glier’s Goetta. 4-11 p.m. Friday and Saturday. $1 per beer ticket; one beer costs five tickets. Mehring Way between the Roebling Bridge and Elm Street, Downtown, aletothequeencity.com. A beloved member of the Cincinnati comedy scene comes home Thanksgiving weekend. “I moved last January,” says comedian Mike Cronin, now based in Chicago. “I picked Chicago over New York and L.A. because it’s a bigger city with more opportunities but still allows me to work the clubs in the Midwest. It’s also a big improv city.” While living in Cincinnati, Cronin worked extensively on the Underbelly show, which featured local comics doing sketch and improv. But right now he says he’s concentrating on his stand-up act. “I put out an album last September (Hot for too Long) and am trying to retire some of those jokes and replace them with newer material.” Friday-Sunday. $8-$14. Go Bananas, 8410 Market Place Lane, Montgomery, gobananascomedy.com.

EVENT: ONE CITY, ONE SYMPHONY

Celebrate Thanksgiving with the help of the Cincinnati Symphony Orchestra’s community-wide project One City, One Symphony. The aim of this project is to bring people together through music while celebrating this year’s theme of “home.” The program is full of all-American music by Bernstein and Copland, plus works by John Williams, performed by saxophonist and NEA Jazz Master Branford Marsalis. 8 p.m. Friday and Saturday. $23-$115. Taft Theatre, 317 E. Fifth St., Downtown, cincinnatisymphony.org.

On the darkest night of the year, residents of a secluded Appalachian town gather at local pub, The Gnarly Stump, to share ghost stories and songs. When an outsider arrives reporting the mysterious disappearance of her sister the lines between story and reality become blurred…there’s more than just trees in those woods. A world premiere at Know Theatre, from Lauren Hynek and Elizabeth Martin, with music by Paul Strickland. Through Dec. 17. $25. Know Theatre, 1120 Jackson St., Over-the-Rhine, knowtheatre.com. 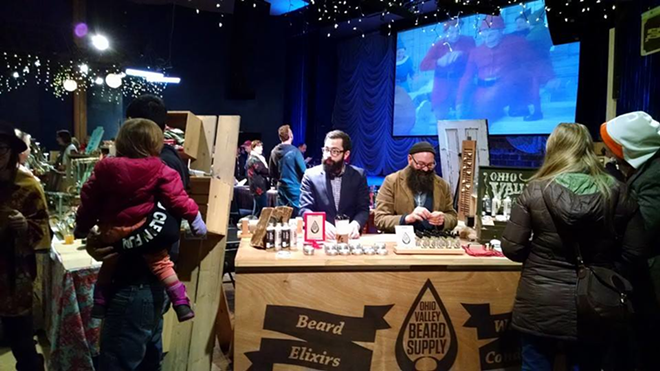 Stay in your pajamas on Black Friday this year — the Oakley Fancy Flea has everything you need to jumpstart your holiday shopping. Oakley’s monthly neighborhood marketplace brings its holiday installment to the 20th Century Theater on Sunday, featuring unique items and decor from artists and small businesses across the region. Bonus: Brunch and booze will be available onsite to take the edge off of post-Turkey Day stresses. 11-5 p.m. Sunday. Free admission. 20th Century Theater, 3021 Madison Road, Oakley, theoffmarket.org.