Hear more than 30 diverse national and local Blues artists at the 25th-annual Cincy Blues Fest; channel your inner slacker for a 'Big Lebowski'-themed booze-fueled scavenger hunt; travel back in time for 1940s Day at the Lunken Airport.

Join the circus performers, belly dancers, demolition drivers, pro wrestlers and livestock that call Hamilton County home. The Hamilton County Fair is in its 162nd year, promising yet another week of family fun. Watch a vintage baseball game, pet a barnyard animal or take a picture with a princess. Grandstands will cheer and engines will rumble as local celebrities, nobodies and law enforcement duke it out in multiple demo derbies. For a little less destruction, visit exhibits on antiques, arts, needlework, poultry and pies. Whether you’ve lived in the county for months or years, you’re sure to learn something new. 4-11 p.m. Wednesday-Friday; 11 a.m.-11 p.m. Saturday; noon-10 p.m. Sunday. $7 admission; $5 parking. Hamilton County Fairgrounds, ​7700 Vine St., Carthage, hamiltoncountyfair.com. 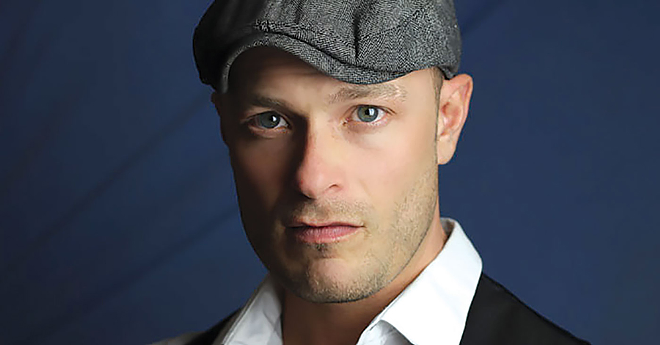 Comedian Mike Stanley liked the comedy scene in his native Detroit, but felt he needed to branch out and “get into a bigger pond with more opportunities.” He’s now based in Denver and travels frequently to L.A., where he works on a new Food Network program and does voice over work. Onstage, he had been talking a lot about the president but has recently dialed that back. “I was doing about 15 to 20 minutes on (Donald Trump) but got bored with it,” he says. He’s focusing now on quick set-up/punchline jokes as well as personal stories. Showtimes Thursday-Sunday. $8-$14. Go Bananas, 8410 Market Place Lane, Montgomery, gobananascomedy.com.

Enjoy fresh seafood, cold drinks and live music at this year’s Great Inland Seafood Festival. Although the event runs Thursday through Sunday, be sure to get there early; otherwise you might miss out on the fest-favorite whole Maine lobsters selling for $11.95 each. More than 15 restaurants and local vendors will be on the scene selling the freshest premium seafood they can get their claws on. Live bands include My Sister Sarah, Hearsay, Swan, Robin Lacy and more. 5-11 p.m. Thursday and Friday; noon-11 p.m. Saturday; noon-9 p.m. Sunday. Free. Festival Park, Riverboat Row, Newport, Ky., facebook.com/greatinlandseafoodfestival.

Celebrating its 25th anniversary this year, Cincy Blues Fest is one of the longest-running Blues festivals in the country. This weekend, the Cincy Blues Society’s event continues doing what has made it so successful and enduring, showcasing more than 30 diverse national and local Blues artists on three stages along the riverfront. Headliners this year include Ruthie Foster, Albert Cumming and Ronnie Baker Brooks (see Sound Advice on page 34), while Jay Jesse Johnson Band, The SoulFixers, Leroy Ellington Band, Ricky Nye, Johnny Fink and the Intrusion, Tempted Souls Band, Everett and Delta Storm and The Beaumonts are among the local artists scheduled throughout the weekend (including performers on the unique Arches Boogie Piano stage). This year, the Blues Fest also spotlights some of the nation’s Blues young guns; Friday’s Youth Showcase Stage features performances by Dayton, Ohio’s Joe Tellmann Band and Kellen Wiilliams Trio; Glastonbury, Conn.’s Jake Kulak and the LowDown; and the Blues in the Schools Band, featuring participants from the Cincy Blues Society’s Blues in the Schools educational programs. 5 p.m.-midnight Friday; 4:30 p.m.-midnight Saturday. $25 per day; $45 weekend pass. Sawyer Point, 705 E. Pete Rose Way, Downtown, cincybluesfest.org.

Channel your inner slacker-self and slip on your comfiest, rattiest bathrobe during the second-annual Big Lebowski-themed booze-fueled scavenger hunt through the heart of Covington’s bar district. You’ll be given a map with a list of challenges and drink specials and be asked to find objects, landmarks and art (which may or may not have been commended as being strongly vaginal, which bothers some men) throughout the crawl. There’ll be prizes, and the night ends at Braxton Brewing Co., which will be tapping a White Russian firkin. Use an Uber at the end of the crawl with the code “grjwe.” Driving drunk is an aggression that will not stand, man. Can’t afford it? Check out the crawl’s pay-what-you-can option. And remember: The dude abides. 6-11 p.m. Friday. $15 early bird; $20 at the door. Check-in starts at MainStrasse Village, Covington, Ky., keepyourshirtoncovington.com.

The oldest tennis tournament in the country returns to Cincinnati with a week of face offs between some of the sport’s biggest stars. Established in 1899, the Western & Southern Open — formerly known as the Cincinnati Open and Tri-State Tennis Tournament — pits men and women against each other tournament-style through Aug. 20, with players including Roger Federer, who is vying for an unprecedented eighth Cincinnati title. But the Open isn’t just for sports lovers: The event also includes a full lineup of food, drinks and live music every day, including performances by local acts like Young Heirlooms and Jess Lamb. Through Aug. 20. Tickets start at $25. Lindner Family Tennis Center, 5460 Courseview Drive, Mason, wsopen.com. 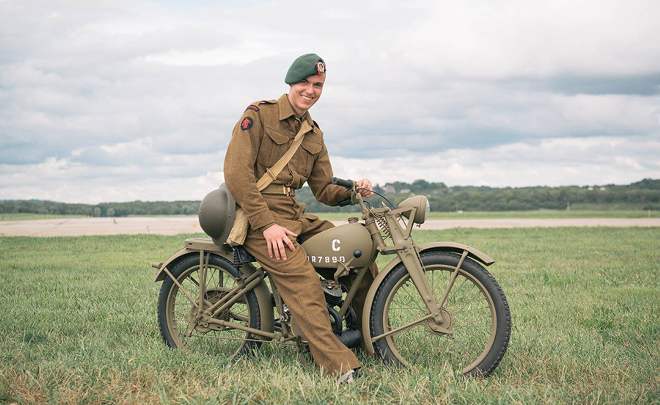 Pin curl your hair and pick up East Coast Swing. The 1940s are alive at Lunken, Cincinnati’s own Art Deco airport. The Cincinnati Museum Center’s 1940s Day will bring the past to the present as vintage airplanes and automobiles line the tarmac. You’ll hear stories from World War II veterans and a Holocaust survivor, as well as hits from Rosemary Clooney, Doris Day and The Andrews Sisters. Boogie-woogie with The Flying Cloud Academy of Vintage Dance and get all dolled up with a makeup artist and hairstylist. You can even make a purchase from Casablanca Vintage to perfect your 1940s look. You’ll leave as pretty as a pin-up. 10 a.m.-5 p.m. Saturday. $10 adults; $5 children; free World War II veterans and Cincinnati Museum Center members. Lunken Airport, 262 Wilmer Ave., East End, cincymuseum.org/events/1940s-day.

ART: THE MASTER OF LOYALTY IS IN THE GALLERY TONIGHT AT THUNDER-SKY, INC.

If ever there were an artist interested in elevating the people around him to celebrity status, it is the inimitable, ever-prolific, constantly evolving, Cincinnati-based Antonio Adams. To return the favor, Adams’ sometimes-collaborator, Pique Gallery co-owner and curator Lindsey Whittle, has reached out to friends, family and actual celebrities to turn the tables on Adams and celebrate him with a show of work created in his honor. The brilliantly titled The Master of Loyalty is in the Gallery Tonight features participating artists David Mack, Tony Dotson, Cedric Michael Cox, Cate Douglas and others. Opening reception 6-10 p.m. Saturday. Through Oct. 6. Free. Thunder-Sky, Inc., 4573 Hamilton Ave., Northside. raymondthundersky.org.

Rarely has the name of a tour more accurately described what you’re getting when you go to the show than American Acoustic. Featuring sets from — and collaborations between — Punch Brothers, I’m with Her and Julian Lage, the tour's name actually kind of undersells what's in store. Avid fans of Bluegrass might already be familiar with what it sounds like when Punch Brothers’ mandolin maestro and A Prairie Home Companion host Chris Thile teams up with I’m With Her’s Aoife O’Donovan — they collaborated (with Yo-Yo Ma, no less) on 2011’s Goat Rodeo Sessions. Pair Thile with a second member of I’m with Her, Sara Watkins, and suddenly you’re looking at two-thirds of Nickel Creek — and who doesn’t want to witness some of that goodness on stage yet again? Read more about the tour in this week's Sound Advice. The American Acoustic Tour comes to Taft Theatre Saturday. Click here for tickets/more show info. 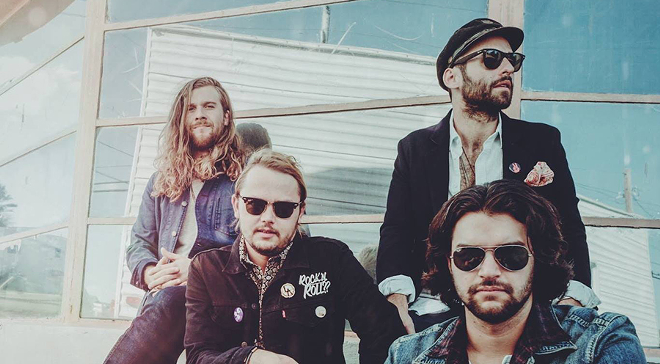 Some musicians are born in Nashville, but the overwhelming majority of the ones there aredrawn in. And so it was with the four talented members of Future Thieves. Guitarist Austin McCool (by birth or imagination, that is a name destined for Rock & Roll greatness) and bassist Nick Goss grew up in Evansville, Ind. and were together from grade school through college before moving to Nashville at different times and winding up in different bands (though still hanging out and making music of their own). When their respective bands broke up, McCool and Goss made their musical partnership official in 2013 with the addition ofGoss's friend, drummer Gianni Gibson, a Nashvillian by way of Los Angeles, New York and London who left his existing band to cast his lot with the nascent new group. Vocalist/guitarist Elliot Collett, a native Kentuckian, was invited to join shortly thereafter, bringing with him a band name he had conceived during his stint in Los Angeles. Read more about the band in this week's Sound Advice. Future Thieves play Urban Artifact Saturday. Click here for more on this free show.

How far would you go to make ends meet? Guys laid off from a Buffalo, N.Y. steel mill are struggling to cope with tough times and supporting their families. Desperate times call for desperate measures: What starts as a lark — a strip show to raise some bucks — becomes a big deal when they have to learn to dance while dealing with body issues and telling their wives what they’re up to. But they are committed to pulling it off. Literally. It’s a lot of laughs and some spirited music, as well as a heartfelt story about doing what needs to be done. Through Aug. 27. $30; $27 Carnegie members; $23 students. The Carnegie, 1028 Scott Blvd., Covington, Ky., thecarnegie.com.

Six suspects, six possible murder weapons and six local bars that may have been involved; solve the mystery of the murdered Covington goose girl this Saturday during the Murder Mystery Pub Crawl, hosted by Braxton Brewing Company. Modeled after the popular board game Clue, pub-crawlers can join a team of four and travel to different bars around the area. Order a Braxton or New Belgium beer and the bartender will give you a clue. Through the process of elimination, solve the mystery and earn yourself a “mediocre prize” at the site of the murder. 6-10 p.m. Saturday. Free. Braxton Brewing Company, 27 W. Seventh St., Covington, Ky., facebook.com/braxtonbrewingcompany.

Eclectic urban street festival Second Sunday on Main returns to Over-the-Rhine this weekend with the theme “It Takes a Neighborhood.” The fest will celebrate the organizations, resources and creativity that make OTR a diverse and tight-knit community. Rain or shine. Noon-5 p.m. Free admission. Main Street between 12th and Liberty streets, Over-the-Rhine, secondsundayonmain.org.