Quote 'The Princess Bride' during a free screening at Seasongood Pavilion; imbibe brews at the Buckeye Beer Bash; browse creative wares by kids at the City Flea's Kids Market. Here Channel, a project by Caroline Creaghead that launches Friday, will enable anyone to be a content creator and host of his or her own audio program. It merges aspects of both radio and podcasting into a streaming format that can be heard online or through listening stations at an Over-the-Rhine studio across from Findlay Market. “I want to encourage as many different people as possible with different levels of experience,” Creaghead says. “I say that meaning technical experience, but also just varieties of experience: people who want to share their ideas, people who want to interview other people or people who just like a type of music. We have all the licensing and royalties taken care of, so you can come in and just say, ‘Here’s my record collection!’” Read more about the project here. Here Channel launches Friday with a 6-9 p.m. party at People’s Liberty’s Globe Gallery, 1805 Elm St., Over-the-Rhine. Portions will be streamed live at herechannelradio.com. It will be active through Sept. 24; check the website for studio hours and/or to hear programming.

Back in 1997, The Full Monty, a British film about unemployed steelworkers in Sheffield, England, was a surprise success. A few years later, it became an Americanized musical and had a successful two-year run on Broadway from 2000 to 2002. The Carnegie in Covington has mounted the show as its late-summer musical. I attended opening night last Saturday in a full house at the Otto M. Budig Theatre, where the audience had a good time watching a bunch of down-and-out guys with good intentions but not much talent try to make a buck by going “the full monty” — stripping down to nothing at all. This British slang term from the 1980s didn’t originally refer to stripping. Its broader meaning was something like going “the whole nine yards” or “the whole kit and caboodle.” The movie sharpened the phrase to its current usage. It’s a bit odd when applied to a story about Buffalo, N.Y., but it’s a concise way to sum up a show about good intentions. Of course, those are the pavers on the road to hell. (One character’s wife says their plan is “funny, scary,” but definitely “not sexy.”) That’s more or less what happens to six out-of-work steelworkers with serious financial obligations and no prospects. Witnessing their wives’ reaction to a male stripper, they decide to follow suit and pick up some fast cash. They’re a mismatched bunch with virtually no experience as dancers (one guy has taken ballroom dance lessons). Nevertheless, faced with self-consciousness and their wives’ doubts, they become a supportive ensemble. They become striptease act Hot Metal and pull it off. Literally. And, I should add, tactfully. Read a review of the show here. The Full Monty is playing Friday and Saturday evenings and Sunday matinees through Aug. 27 at The Carnegie, 1028 Scott Blvd., Covington. Tickets/more info: thecarnegie.com.

Photo: Provided by The Drama Workshop

ONSTAGE: A FUNNY THING HAPPENED ON THE WAY TO THE FORUM

Stephen Sondheim’s 1964 musical was the first time he composed the score and wrote the lyrics for a Broadway musical. He hit home runs on all counts — and after a half-century, A Funny Thing Happened on the Way to the Forum is still a surefire hit with audiences, a farce from start to finish with non-stop laughter. Based on a Roman comedy, it’s the story of Pseudolus, a crafty slave seeking to win his personal freedom by carrying out a zany plot of matchmaking for his young master and a dim-witted courtesan. The Drama Workshop kicks off its 2017-18 season with “something for everyone — a comedy tonight.” Through Aug. 27. $18. The Glenmore Playhouse, 3716 Glenmore Ave., Cheviot, thedramaworkshop.org.

In less than a decade, Hip Hop artist Logic has risen to astronomical heights in the music industry, enjoying both critical acclaim and mainstream commercial success. The artist born as Sir Robert Bryson Hall II released the first of several mixtapes in 2010 and has been on a steady path to the top of charts ever since. Logic’s first studio album, Under Pressure, hit No. 4 on Billboard’s album chart, and after 2015’s successful The Incredible True Story, the MC returned earlier this year with Everybody, an album on which he more directly explored serious social issues, as well as personal ones, such as mental illness (the title of his hit “1-800-273-8255” is a national suicide prevention hotline). The album became his biggest yet, debuting at No. 1 on the album charts. While his lyrical skills and delivery (and success) put him on a level well beyond the “Nerdcore” Rap scene, Logic is proudly nerdy — one of Everybody’s “features” is from astrophysicist Neil deGrasse Tyson, and Logic made his own cameo on the most recent episode of cult-favorite animated series Rick & Morty. Also appearing at Logic’s Cincinnati show are Joey Bada$$ and Big Lenbo. 7:30 p.m. Friday. $39.50-$132. PNC Pavilion at Riverbend, 6295 Kellogg Ave., California, riverbend.org.

FILM: CINEMA IN THE CITY: THE PRINCESS BRIDE

Head to Mount Adams’ Seasongood Pavilion to see a screening of 1987’s The Princess Bride, possibly one of the greatest romantic comedies — and most quotable films — ever made. Cary Elwes stars as farmhand Westley and, later, the Dread Pirate Roberts, in love with Buttercup, a beautiful farm girl played by Robin Wright. Buttercup is slated to marry a gross dude named Prince Humperdinck, when she’s kidnapped by a rowdy gang of outlaws (featuring Mandy Patinkin as fencing expert Inigo Montoya and André the Giant as Fezzik, also a giant). Then comes the Fire Swamp, the Six-Fingered Man, Rodents of Unusual Size, blah, blah, blah and The Dread Pirate Roberts, who vows to save Buttercup from the kidnappers and her fate as the future lady Humperdinck. Comedy, beautiful landscapes and quotes ensue, including: “Hello, my name is Inigo Montoya. You killed my father. Prepare to die;” “Mawage is wot bwings us togethar today;” and “As you wish.” Features pre-show live music from The Comet Bluegrass All-Stars and food from Calle and streetpops. 7 p.m. music; film starts at dusk. Free. Seasongood Pavilion, 950 Eden Park Drive, Eden Park, mtadamscincy.org. — MAIJA ZUMMO

Comedian, actor and TV presenter Alonzo Bodden is fresh off the Just for Laughs Comedy Festival in Montreal, where he was quite busy. “I hosted the ethnic show, which is one they would never allow in the United States because they’d be too politically correct and scared of it,” he says with a laugh. He also hosted the Just for Laughs Awards. On stage, Bodden still likes to do what he calls social commentary. “It’s political issues of the day,” he says. “Obviously with Donald Trump in the White House, you can’t not talk about that, but my whole show is not going to be about him.” There will also be some talk about Congress. “The people with the best health care plan on the planet, voting against us getting health care,” Bodden muses. “How does John McCain get free brain surgery, then vote on whether or not we should get health care?”Showtimes Friday-Sunday. $15-$18. Liberty Funny Bone, 7518 Bales St., Liberty Township, liberty.funnybone.com. 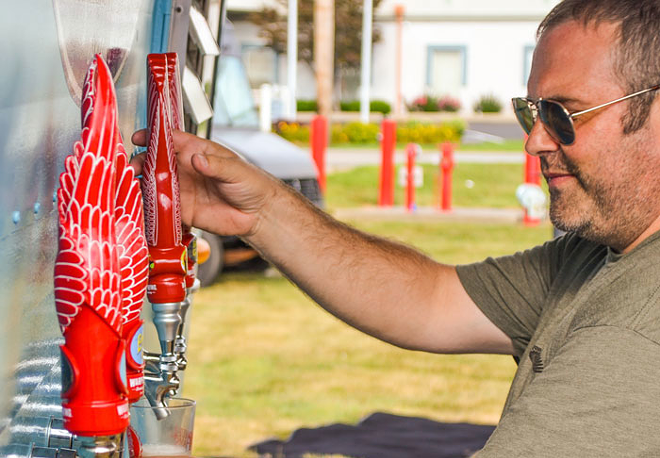 The City Flea is back for its first fall market of the season (where did summer go?!). The urban curated flea market takes over Washington Park with dozens of vendors selling a little something for everyone — clothes, pet supplies, home goods, sewn goods and so much more. This particular installment includes the second-annual Kids Market, which gives children ages 4-14 the opportunity to showcase and sell creative wares of their own. 10 a.m.-4 p.m. Saturday. Free admission. Washington Park, 1230 Elm St., Over-the-Rhine, thecityflea.com.