Sip cider under the stars during Celestial Sips; eat a little bit of goetta everything at MainStrasse Village's Goettafest; imbibe copious brews during Cincinnati Beer Week. 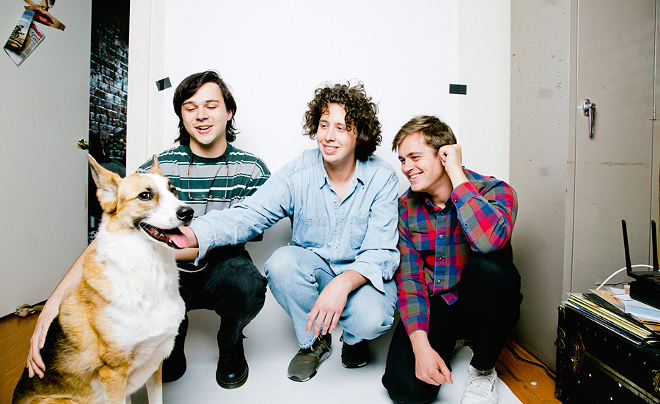 Over the past two years, Hoops has experienced a brighter media spotlight than any of its members ever dared to imagine. In fact, the Bloomington, Ind. quartet’s history goes back considerably farther than the attention lavished on the group since signing with Fat Possum Records, the release of its debut EP for the label and the more recent release of their first full-length album, Routines. Vocalist/guitarist Drew Auscherman, bassist Kevin Krauter, keyboardist Keagan Beresford and original drummer James Harris came together organically six years ago when they were all high school juniors. Auscherman was recording Ambient loop tracks under the name Hoops — inspired by the hoop houses at his plant nursery job — and posting them on Bandcamp. Eventually he recruited Krauter and Harris to form an actual band for basement shows and regional club gigs, which morphed into recording. Although none of them took the band seriously, they continued to play through senior year, before shuttering the band when they started college classes. Read a feature on Hoops here. Hoops plays Friday at Urban Artifact. Click here for ticket info.

It’s a reasonable certainty that Jeremy Enigk doesn’t own a razor-creased pinstripe suit that gives him the appearance of a mobbed-up wise guy, and it’s just as certain that history views him as The Godfather of Emo. Enigk’s first band of note, Sunny Day Real Estate, released its genre-defining Diary in 1994, effectively transforming Post Hardcore into the histrionic Grunge offshoot known as Emo. During the band’s first of several breakups/extended vacations, Enigk released his debut solo album, 1996’s Return of the Frog Queen, an amazingly restrained Chamber Pop piece that proved his depth as a songwriter and performer. Read more in this week's Sound Advice. Enigk's Cincinnati show is a freebie on Fountain Square. Click here for more info.

Isaac Abrams, one of the four artists featured in the Distant Horizons: Pioneers of Psychedelic Art exhibit opening Friday at Carl Solway Gallery, well remembers when he tried the hallucinogenic drug LSD. It was 1965 and he had already taken the mind-altering substances psilocybin and mescaline. But acid, as LSD was called, was stronger — it caused a radical heightening of consciousness.“I came away with the idea that the experience was profound and had to generate an artistic response,” he says. So he started a gallery devoted to Psychedelic art, Manhattan’s Coda. He found few if any artists creating the kind of work he liked, and eventually cash ran short. “So I traded for a large canvas, 5-by-7 foot, and some small canvases and I spent a short time learning how to mix paint and which brushes to use and I embarked on my first serious painting,” he says. Read more about the exhibit here. Distant Horizons: Pioneers of Psychedelic Art opens Friday with a 5-8 p.m. reception at Carl Solway Gallery (424 Findlay St., West End). The artists and guest curator Carlo McCormick will have a panel discussion at 12:30 p.m. Saturday, followed by a poetry reading by Gerd Stern. The show is up through Sept. 16. More info: solwaygallery.com.

Photo: Provided by Children's Theatre of Cincinnati
ONSTAGE: THE CAT IN THE HAT!

“Look at me! Look at me! Look at me NOW! It is fun to have fun but you have to know how.” With his zany red-and-white striped hat and red bowtie, the Cat in the Hat certainly knows how. The most mischievous cat ever has tricks and crazy ideas that turn rainy afternoons into adventures. But what happens when Sally and Dick’s mom gets home? Children’s Theatre is presenting an adaptation from the National Theatre of Great Britain, the first full-scale, family-friendly production on the 150-seat Corbett Showtime Stage in its new theater home. Through July 9. Tickets start at $20. The Children’s Theatre of Cincinnati, 4015 Red Bank Road, Madisonville, tctcincinnati.com. — RICK PENDER

Imagine: over 400 types of imported and local brews from over 100 breweries surrounding you, ready to pour. With bonus barbecue sandwiches, a commemorative glass and rare international beer selections, the 14th-annual International Beer Festival at Jungle Jim’s is one of the longest-running beer events in Cincinnati. A special firkin tapping will kick off the celebration on both Friday and Saturday night for true fermented fans. 7-10:30 p.m. Friday and Saturday. Daily tickets: $60 early admission; $50; $20 non-drinker. Jungle Jim’s, 5440 Dixie Highway, Fairfield, junglejims.com.

After traveling to Greater Cincinnati by way of German immigration, goetta has claimed its rightful spot among the scrambled eggs and buttered toasts of breakfasts in and around the city. But Goettafest is reimagining this German-American breakfast staple. Taste the traditional meat-and-grain sausage in cheeseburgers, chili, donuts and more at this three-day festival. Whether a goetta traditionalist or experimentalist, you’ll find a delicious dish. Enjoy food, music, arts, crafts and more as you make your way through a storybook setting and get a taste of authentic German heritage. 5-11:30 p.m. Friday; noon-11:30 p.m. Saturday; noon-9 p.m. Sunday. Free admission. MainStrasse Village, Covington, Ky., mainstrasse.org.

Cincinnati might seem like an unlikely haven for experimental music, but the Queen City has long offered a welcoming tour stop for underground road acts and a strong support system for homegrown creators. Two of the primary instigators, Jon Lorenz and John Rich, founded the No Response Festival last year to bring to town some big names in the experimental music world for rare and unique performances, drawing attention (and fans) from across the region. No Response returns this weekend with another stacked lineup that includes Friday headliner Genesis Breyer P-Orridge — an Industrial and avant-garde music legend who co-founded Throbbing Gristle and Psychic TV — in a multimedia performance with collaborator Edley ODowd. Saturday’s headliner also has a rich, long history: Founded in Japan in 1979, Hijokaidan is one of the first Noise bands on the planet, improvising cacophonous, antagonistic waves of aural discord and earning a name for itself for a chaotic live show. 8 p.m. Friday and Saturday. $25; $30 day of; $50 two-day. Woodward Theater, 1404 Main St., OTR, woodwardtheater.com.

On Friday, one of Cincinnati’s newest publishers, Waxing Press, will be presenting its author Daniel S. Jones, reading from and signing his debut novel An Accidental Profession. Books will be available for purchase ($15) at the event. According to a press release from Waxing’s founder Ian Wissman, Jones’ novel “paints the louche and lecherous world of the modern corporate office in stark fluorescence.” Jones previously won an Association of Writers & Writing Programs’ Intro Journals Prize for his anti-war short story “Lysistrata, Kentucky.” 7-9 p.m. Friday. Free. Northside Yacht Club, 4227 Spring Grove Ave., Northside, waxingpress.com.

Fusing stone arches and pastel blue, the John A. Roebling Suspension Bridge is arguably one of the most Instagram-worthy landmarks of Greater Cincinnati. Cars and pedestrians have used the bridge, which connects Cincinnati to Covington via the shorelines of the Ohio River, for 150 years. Celebrate its anniversary this Father’s Day weekend with walking tours, the Forget-Me-Not Dancers, historical presentations and 17 historical exhibits from the Kenton County Public Library, the Freedom Center, Behringer-Crawford Museum and more. Wind down the day with a street party featuring live music and grub before fading into the night with fireworks. 10 a.m.-6 p.m. Saturday. Free. E. Third Street and Court Avenue, Covington, Ky., roeblingbridge.org.

It’s that time of the month where the City Flea takes over Washington Park. Find fine art, vintage clothing and fabulous food all in one place. Stroll in the sun and soak up the creative energy of the Queen City. With hundreds of vendors, you’ll be sure to find stores you’ve never heard of. 10 a.m.-4 p.m. Saturday. Free admission. Washington Park, 1230 Elm St., OTR, thecityflea.com. 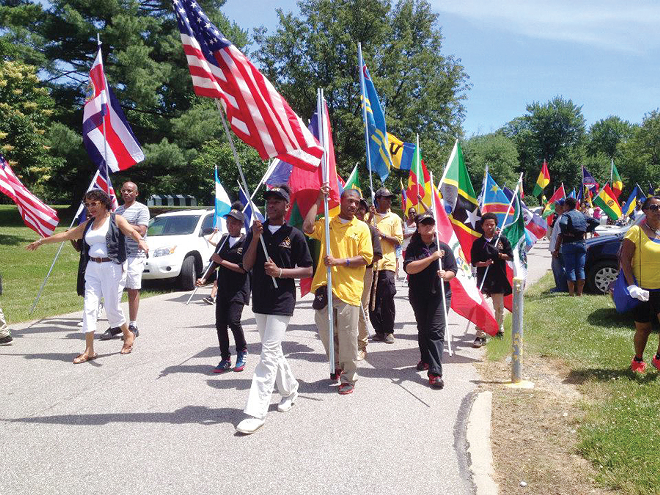 Celebrate Juneteenth, a day that commemorates the end of slavery in the United States. With festival roots in Cincinnati dating back to 1988, this multicultural event boasts diverse and family-centered activities. Grab a lawn chair and lend an ear to traditional storytelling or indulge your senses in a sweet potato pie bake-off as music wafts through the atmosphere, including Blues, African drumming, Gospel, Reggae and more. Vendors will offer food, clothing, folk art and crafts as well as ethnic literature. Noon-9 p.m. Saturday; 2:30-6 p.m. Sunday. Free. Eden Park, 950 Eden Park Drive, Eden Park, juneteenthcincinnati.org.

Sip cider under the stars in celebration of the Summer Solstice. This annual alcohol tasting will feature beers and ciders from Rhinegeist Brewery. Take a tour of the historic Cincinnati Observatory, look through its telescope (weather permitting) and drink from your own custom-etched pint glass. Guests can learn about the stars above with a cold brew in hand, bid in a silent auction and goof off in a photo booth. 8-11 p.m. Saturday. $60; $50 members. Cincinnati Observatory, 3489 Observatory Place, Mount Lookout, cincinnatiobservatory.org.