Cure your Friday night hangover (or get a brand new one) with CityBeat’s Brunched event; explore a new open-air market located on a 56-acre Clydesdale farm; indulge in two of food's best creations: bacon and cheese.

MUSIC: The massive BUNBURY MUSIC FESTIVAL descends on Sawyer Point and Yeatman’s Cove with three days of diverse headliners and local acts. Read about some reason to arrive early in this week's Sound Advice. 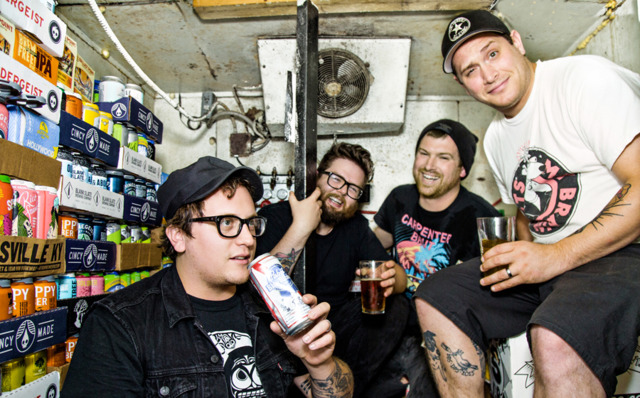 It’s been a momentous seven years since my last official conversation with Cincinnati’s The Dopamines. The band won a 2011 Cincinnati Entertainment Award, released its third album, 2012’s blistering, blustery Vice, and did two European tours. Bassist Jon Weiner partnered with DAAP Girls’ Stuart MacKenzie as owners/operators of the Northside Yacht Club, touring guitarist Josh Goldman became an actual member, vocalist/guitarist Jon Lewis got married and both Lewis and Goldman became fathers. Now the band is about to release its fourth and best full-length, Tales of Interest, and, given some of the above, the musicians have backed away from their road-warrior status, limiting performances to a few local shows (though touring is set to pick up this month following the album's release). Read more about the band here. The Dopamines host a release party for their new album Friday at Northside Yacht Club. More info: northsideyachtclub.com.

This three-day event is a celebration of authentic Italian heritage. Weave between booths, carnival rides and vendors from local Italian restaurants and unwind to music acts like The Rusty Griswolds, Mickey James and the Queen City Crew, Sal Ventura & Dr. Zoot and Ray Massa’s EuroRhythms — all while clutching a garlic knot. Don’t miss an open-air wine garden in an atmosphere infused with the scent of simmering marinara, lasagna just like ma made it and craft beer. The festival also features cooking demos, raffles (with a grand prize of $7,500) and a recreated piazza. All proceeds go toward the Saint Catharine of Siena Parish and School in the Westwood community, San Antonio Italian Church and scholarship funds of the Italian societies. 6 p.m.-midnight Friday; 3 p.m.-midnight. Saturday; 1-9 p.m. Sunday. Free entry. Harvest Home Park, 3961 North Bend Road, Cheviot, cincitalia.org.

Lil Duval comes out of the Atlanta comedy scene after moving there from his hometown of Jacksonville, Fla. Born Roland Powell, he took his stage name from his birthplace: Duval County. In 2001, while competing in a comedy competition in the Bay Area, he was noticed by Cedric the Entertainer’s road manager and invited to join that veteran stand-up’s tour. “I can’t hold my liquor,” he tells an audience. “You ever get so drunk you have to hold on to the grass so you don’t fall off the edge of the Earth? No? Just me?” In 2005, Duval was a finalist on BET’s Coming to the Stage comedy competition and is a series regular on the MTV2 shows Guy Code and Hip Hop Squares. He has also served as host of the viral video show Ain’t That America on MTV2. Showtimes Friday-Saturday. $22. Funny Bone Liberty, 7518 Bales St., Liberty Township, liberty.funnybone.com. Stretching along Coney Island, Summerfair Cincinnati is set to return for its 50th year, making it one of the oldest ongoing art fairs in the country. The art showcased comes in an array of forms, textures and styles ranging from photography to ceramics to painting. While perusing, you can enjoy four stages featuring local entertainers or munch on gourmet food, including Miss Kylee’s Funnel Cakes, Cosmic Kettle Corn and Mountain BBQ. Summerfair has ultimately created a niche in which artists can seek support for their talents by showcasing both regional and local artists. Beyond providing a platform for exposure, all proceeds go toward providing scholarship and exhibit opportunities to students, professional artists and art organizations. Take a day — or a full weekend — to immerse yourself in trails of color, concepts and art. 2-8 p.m. Friday; 10 a.m.-8 p.m. Saturday; 10 a.m.-5 p.m. Sunday. $10 (cash only at gate); kids 12 and under free. Coney Island, 6201 Kellogg Ave, California, summerfair.org.

"Conversations, II: I and I" by Saad Ghosn
ART: SOS ART OPENING RECEPTION AT ART ACADEMY OF CINCINNATI

SOS ART, a ten-day art show founded and organized by University of Cincinnati Professor Emeritus Saad Ghosn that seeks to give a platform for creative expressions for peace and justice, will hold its 15th-annual exhibition opening, which will include introductory notes by artist and educator Matt Reed, artist talks and a potluck reception. Other evenings throughout the following week will feature music, documentary screenings, poetry readings, dance performance and a panel discussion regarding “Our Environment and How to Protect It.” Opening reception 6 p.m. Friday; on view through June 11. Free. Art Academy of Cincinnati, 1212 Jackson St, Over-the-Rhine, sosartcincinnati.wordpress.com.

Cure your Friday night hangover (or get a brand new one) with CityBeat’s Brunched event, a boozy breakfast club at The Phoenix downtown, presented by Tito’s vodka. Like any good brunch, we’ll be serving up plenty of restorative libations, including delicious drinks from an uber competitive Bloody Mary War and Mimosa Off — sip, contemplate and then vote for your favorites. There will also be beverages from the likes of BLOC Coffee Company, Smooth Nitro Coffee, Revel OTR Urban Winery and plenty more. And if you’re looking to eat some actual food, tickets include unlimited samples from vendors like Wild Eggs, Keystone Bar & Grill, Maplewood, 27 Bar+Kitchen and Macaron Bar, to name a few. This event is for weekend warriors 21 and older. A portion of proceeds will benefit the Patty Brisben Foundation. 11 a.m.-2:30 p.m. Saturday. $25 Early Bird; $30 general; $35 day-of. The Phoenix, 812 Race St., Downtown, citybeat.com. — MAIJA ZUMMO

EVENT: UNDER THE MARKET TOUR

Walk in the footsteps of Cincinnati brewing legends, Johnny Cash and an American Legacy tour guide in the new Under the Market Tour. This bona fide adventure will uncover Cincinnati history from below the city’s surface. First, guides and guests will travel through the hub of the 19th-century Linck brewery and learn about the two brothers who shaped those tunnels and, in turn, a piece of local brewing history. Other stops include the location of a Johnny Cash movie, the historic Bellevue Incline and the original Christian Moerlein Brewery complex — all unearthed in this rediscovery of Over-the-Rhine’s past. 11:30 a.m. Saturday. $25 general admission. Tour begins at 1818 Race St., Over-the-Rhine, americanlegacytours.com.

Located on a 56-acre Clydesdale farm in Lebanon, Ohio, Charm at the Farm is a brand-new open-air market brimming with rustic and vintage finds. More than 70 local shops and artisans will coalesce to sell everything from furniture to home goods, including custom lighting and repurposed décor. The market’s grand-opening celebration includes food trucks, a fashion show and a vintage photo booth, with proceeds from the event benefitting Matthew 25: Ministries. 10 a.m.-6 p.m. Saturday; 10 a.m.-4 p.m. Sunday. $5. 4953 Bunnell Hill Road, Lebanon, charmatthefarm.com. 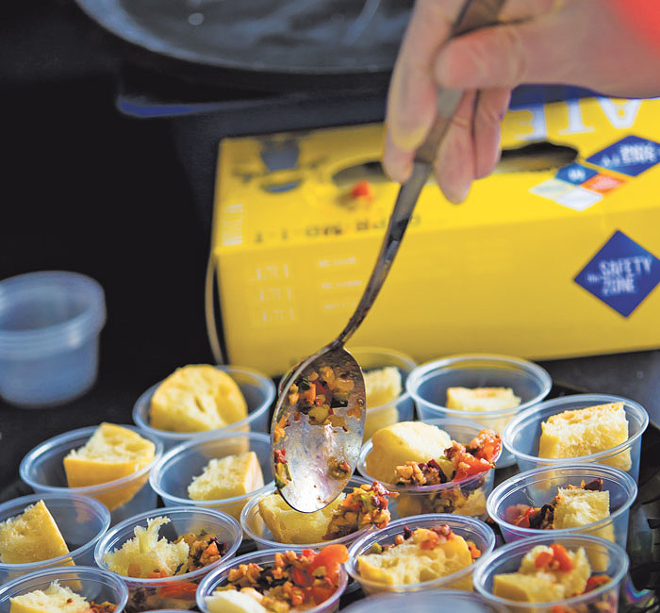 There’s really nothing better than a little bacon and cheese (well, unless you’re a vegetarian, but still, cheese — and alcohol!). Jungle Jim’s massive Bacon & Cheese fest is back for its second year of celebrating “some of the most palatable pork products you’ve ever had the pleasure to partake in.” The Eastgate location’s parking lot will be filled with bacon and cheese creations, beer and special events like a S’Wine Tasting: That’s a wine pairing event with — you guessed it — cheese and bacon. Other activities throughout the fest include balloon animal making, face painting, some friendly food competition and live entertainment. 4-8 p.m. Saturday. $10 adults; $4 kids. Jungle Jim’s, 4450 Eastgate S. Drive, Eastgate, junglefests.com.

From collector’s items to unique home furniture pieces, there’s something for everyone at the Tri-State Antique Market. Every first Sunday of the month through October, nearly 250 vendors display early American artifacts, mid-century modern memorabilia and everything in between at “Indiana’s largest antiques and vintage market.” Common findings include vintage jewelry, military relics and pop culture collectibles. The market, which attracts almost 20,000 visitors each season, will go on rain or shine with over half of the vendor displays covered or indoors. 6 a.m.-3 p.m. Sunday. $3. Lawrenceburg Fairgrounds, US 50 at Argosy Casino Parkway., Lawrenceburg, In., queencityshows.com.