Discover a vibrant art installation inside the display windows of two vacant businesses; hop aboard the "Bill Murray Express" with Keep Your Shirt On Covington; guzzle green beer at the Saint Patrick's Day Parade.

The current trend in the film industry is the reboot —taking an old formula or beloved classic narrative and reconfiguring it with contemporary updates. The more difficult task, however, is the reinvention, because to truly make something new again — whether a movie or a film festival — there has to be an appreciation for the past and a willingness to incorporate the best of that history into the new iteration.That’s the attempt being made this Thursday through Sunday when the ReelAbilities Film Festival occurs at the Duke Energy Convention Center. The schedule is available at reelabilities.org. The festival is presented by Cincinnati’s Living Arrangements for the Developmentally Disabled (LADD). Read more about the fest and see CityBeat Critic's Picks in this week's cover story.

For fashion aficionados looking to be inspired by new trends or the work of late great textile artists, you might think to visit the Cincinnati Art Museum or Contemporary Arts Center. Really, you’d think to go anywhere but the blustery streets of downtown Cincinnati in March. But for fans of fashion designers like Prada, Céline, Givenchy, Marc Jacobs, Moschino and more, look no further than the display windows of two vacant businesses from 14 to 18 W. Fourth St. Once home to the upscale Gidding-Jenny department store (which closed in 1995), the location has been empty since T.J. Maxx left in 2015. Unveiled Feb. 8, the new Positively 4th Street: Downtown’s New Look exhibit is an interactive homage to the history of both the buildings it lives in and the fashion of Cincinnati — even if some of the outfits on display are decidedly avant-garde. The exhibit is vibrant and lit-up and seems to spill out of the windows and onto the sidewalk. The mannequins behind the long glass panels strike manic poses and sport neon mohawks; some are flanked by televisions flickering vaporwave visuals. Read more about the exhibit here.

ART: REMBRANDT AND THE JEWS: THE BERGER PRINT COLLECTION

Rembrandt and the Jews: The Berger Print Collection, the new exhibition at the Skirball Museum on Hebrew Union College-Jewish Institute of Religion’s campus, features etchings that show how this Dutch Master portrayed Jewish and biblical subjects. As such, it is fascinating on several fronts. Rembrandt Harmenszoon van Rijn, who lived from 1606-1669, is recognized as one of the greatest painters ever, but he was also highly accomplished at getting detail, texture and subtly dramatic shadowing from the difficult skill of etching. In this show featuring 22 of his etchings from the Berger Print Collection, you can see that talent on display in such works as “Abraham and Isaac,” “Abraham’s Sacrifice,” “The Triumph of Mordecai” and “Jews in the Synagogue (Pharisees in the Temple).” Read more about the exhibit here.

ART: THE WIRED, THE THREAD IN THE RIVER AND CALLING

How do you know what you know? Through the internet? A photo? A dream? Three separate shows now at the Weston Art Gallery — The Wired, The Thread in the River and Calling — form a rich dialogue about what we think is real and what is really real as we move through time and space. Read about them here.

No matter how you feel about circuses, there’s no denying that the shuttering of Ringling Bros. and Barnum & Bailey circus is the end of an era. After 146 years of performances, the circus is in the midst of its final tour, Circus XTREME, which is scheduled to conclude in New York on May 21. According to parent company Feld Entertainment’s chief executive Kenneth Feld, the decision to close was made because of declining ticket sales, which plummeted even further after elephants were phased out of performances last year — a result of ongoing protests and concerns over animal rights. Regardless, this is your last chance to experience “the greatest show on Earth” one final time when it swings by U.S. Bank Arena. Through March 19. Tickets start at $15. U.S. Bank Arena, 100 Broadway St., Downtown, ringling.com, usbankarena.com.

If you need a dose of feel good, Broadway in Cincinnati is offering a three-day fix with the farewell tour of Mamma Mia!, a collection of ’70s Swedish supergroup ABBA’s greatest hits. Sure, they’re strung together with a funny story about love and friendship, but much of the show’s amusement lies in just how hit numbers like “Dancing Queen,” “Take a Chance on Me” and “Super Trouper” are woven — sometimes implausibly — into the narrative. This show has entertained more than 45 million people worldwide, and it’s been performed at the Aronoff 56 times. People keep coming back to the lighthearted musical because fun is “the name of the game.” 8 p.m. Friday; 2 and 8 p.m. Saturday; 1 and 6:30 p.m. Sunday. $39-$94. Aronoff Center for the Arts, 650 Walnut St., Downtown, 513-621-2787, cincinnatiarts.org.

Bill Murray — master of ’80s screwball comedy, Sofia Coppola’s deadpan wunderkind and Wes Anderson darling — has inspired his own bar crawl. The Bill Murray Bar Crawl: Streetcar Edition, presented by Keep Your Shirt On Covington, will offer a ride on the “Bill Murray Express” for a night of costumes, cocktails and prizes. Dress in your best Murray-movie-inspired garb for a chance to win a $100 gift basket. Each stop features trivia. Register online for an exclusive Bill Murray event shirt, a two-day streetcar pass, a wristband that unlocks access to drink specials at participating bars — including Arnold’s, Japp’s and The Drinkery — and a chance to win prizes throughout the night. A portion of proceeds benefits The Women’s Crisis Center. 7-11 p.m. Friday. $30. Starts at The Banks, Downtown, keepyourshirtoncovington.com.

Photo: The Carnegie
"Yantra Drawings" by Tracy Featherstone
ART: THE NOTHING THAT IS: A DRAWING SHOW IN FIVE PARTS AT THE CARNEGIE

The Carnegie exhibitions director Matt Distel and North Carolina-based curator Bill Thelen have curated a selection of more than 90 artists who explore drawing in vastly diverse ways — from the very traditional two-dimensional approach to more conceptual practices as a community-based activity. The two curators present talented artists from their respective regions alongside artists with major international acclaim. A previous iteration of this exhibition was presented at CAM Raleigh. This version has been modified to include selections from local Tristate artists and collections. Opening reception 5:30-9 p.m. Friday. Through April 15. Free. The Carnegie, 1028 Scott St., Covington, Ky., thecarnegie.com.

Ledge Gallery, on a windowsill of Your Friends & Neighbors homegoods shop in East Walnut Hills, is a silly/serious venture with a knack for examining tiny objects and big questions — like why Cincinnatians freak out over changes to Skyline’s oyster crackers. Thankfully, Team B Architecture & Design of Over-the-Rhine understands that details are important to chili connoisseurs. ForLightly Salted, it has created 3-D-printed versions of oyster crackers and drawings that highlight the crimps, folds and air pockets that capture every drop of hot sauce. The show is presented as an “amuse-bouche” during Walk on Woodburn. Down the street, Manifest (2727 Woodburn Ave.) opens exhibits about space and place, plus a Kentucky showcase. Opening reception 6-9 p.m. Friday. Through April 19. Free. Ledge Gallery, Your Friends & Neighbors, 2803 Woodburn Ave., East Walnut Hills, ledgegallery.com. 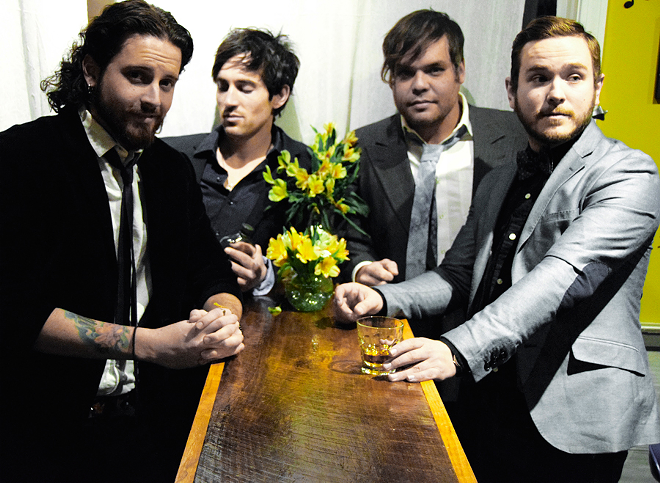 Regardless of the era, keeping a band going for 17 years is an impressive feat. But keeping an independent band together since 2000 — as is the case with Maine-based rockers SeepeopleS — shows particular dedication. SeepeopleS have endured a complete shift in the very way music is consumed by sticking to the foundation on which the band was built: writing good songs, constantly touring and building/retaining a fanbase by repeating that simple, timeless formula. It helps that SeepeopleS’ music is melodic, well-crafted Pop Rock that is unshackled by trends and fleeting tastes. The group’s forthcoming EP, Hate (part of a trilogy of EPs and the band’s seventh studio effort), is a great representation of frontman/guitarist Will Bradford’s strong, timeless songwriting skills. Opening track “The Burning Bridge” is a swaying but never meandering slice of Psychedelic Pop, a vibe that carries over to the more uptempo “Just Like the Animals” and the lush, ethereal “Scapegoat.” But the band can crank up the adrenaline and still maintain its captivatingly melodic allure. Buzzsaw rocker “New American Dream” brings the EP’s political themes to the forefront (SeepeopleS never shies from political outspokenness; the group played a rally in support of Bernie Sanders last year), with snarky (yet presently relevant and scary) lyrics about wanting to be president in order to have the power to kill everyone and use nuclear weapons. Read more about the band in this week's Sound Advice. SeepeopleS play Stanley's Pub Saturday with Kumasi. Click here for more show info. This parade laughs in the face of Cincinnati’s testy weather patterns. Come rain or shine, you can count on seeing the Cincinnati Saint Patrick’s Day Parade snaking its way through downtown. Rummage through your dresser to secure your greenest getup and come out to celebrate the patron saint of Ireland with your fellow Cincinnatians. The parade kicks off at noon at the corner of Paul Brown Stadium and ends on Freedom Way and Rosa Parks Street. Whether Ohio decides to give parade-goers a sunny day or a blizzard of biblical proportions, the spirit of the holiday — and the green beer — is sure to keep you cozy. Noon Saturday. Free. Downtown Cincinnati, cincystpatsparade.com. If you prefer your entertainment in bite-sized chunks, Cincinnati World Cinema’s presentation of Oscar Shorts and More should be right up your alley. The Academy Award-nominated live action and animated short films will be showcased in separate programs, with each program running under two hours. For more on the event and recommended films, see Onscreen on page 24. 4 and 7 p.m. Saturday; 3 and 6 p.m. Sunday. Single program tickets start at $10; double program tickets start at $18. Memorial Hall, 1225 Elm St., Over-the-Rhine, memorialhallotr.com.

If you’re not hooked immediately by the name “The Rhined,” we suggest you look elsewhere — this event is not for you. The Rhined is a new artisanal cheese and provision company soon to open a brick-and-mortar shop following the wild success of their retail pop-up markets, gift boxes and infamous donut and cheese pairing nights, which often end when they inevitably sell out. Joined by Cincinnati staples Macaron Bar, The Rhined presents a cheese and macaron pairing. This is one of the few times when playing with your food is actually encouraged, so take full advantage of this opportunity to sample delectable macarons paired with their appropriate cheese counterparts, and some sparkling vino. Space is limited, so RSVP is highly encouraged. 6-7:30 p.m. Saturday. $35. Macaron Bar, 1206 Main St., Over-the-Rhine, macaron-bar.com.