Shop for fascinating finds at the City Flea; break out your lederhosen for the MainStrasse Maifest; celebrate summer at Washington Park.

Lace up your running shoes for the 11th-annual OTR 5K. The 5K, which featured more than 1,200 runners last year, will kick off at Washington Park 9 a.m. Saturday and loop around OTR and the Brewery District. But it isn’t just a race: It’s also a two-day Summer Celebration. The party starts on Friday, when everyone is invited to take a ride with Red Bike for a neighborhood tour and then stroll through the park for Art on Vine, with bonus food trucks and live music. After the race on Saturday, join local vendors at the first City Flea of the summer. Get active and show support for the shops, restaurants and people that make Over-the-Rhine thrive. 4-10 p.m. Friday; 9 a.m.-4 p.m. Saturday. $40 race registration; free summer celebration. Washington Park, 1230 Elm St., Over-the-Rhine, otrchamber.com. 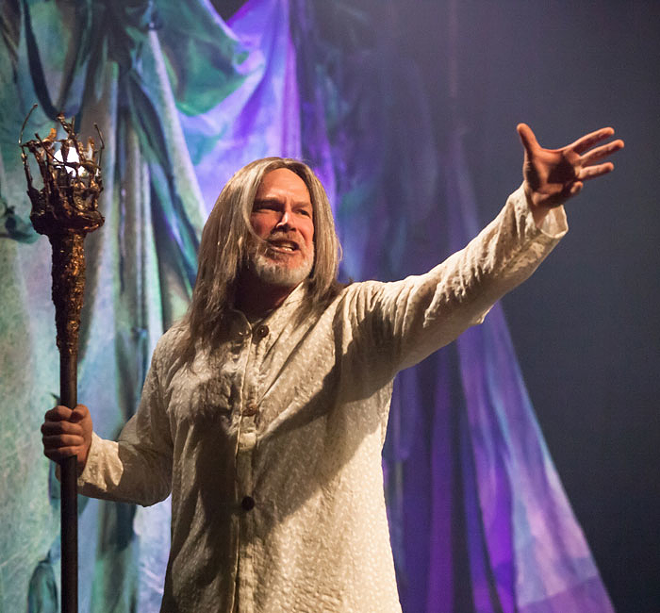 There are only a few more performances of this final production at the Cincinnati Shakespeare Company’s longtime downtown location on Race Street. (The company moves to its new Over-the-Rhine theater in September.) The Tempest, Shakespeare’s final play and his farewell to theater, has been the perfect show to round out this part of the company’s existence. Actor Nick Rose, involved in starting the company back in 1993, plays the magician Prospero. From start to finish, this is a magical production with an excellent cast and imaginative design. In fact, that’s part of the fun: seeing just what’s behind the scenes.Through Saturday. $14-$36. Cincinnati Shakespeare Company, 719 Race St., Downtown, cincyshakes.com.

Building Value’s annual ReUse-apalooza fundraiser brings the goals of sustainability and accessibility together, giving artists an opportunity to get crafty for a cause. The eccentric evening will feature Late Night-inspired lip sync battles, power tool drag races and a wine bike, as well as the main event: the Designer Challenge. In a night full of oddity and artistry, guests can bid on creatively repurposed furniture and decor. Local eats will also be provided. Proceeds benefit Building Value, a nonprofit reuse center founded by Easterseals that recycles building materials and employs those with workplace disadvantages. 7-11 p.m. Friday. $35. Building Value, 4040 Spring Grove Ave., Northside, buildingvalue.org. 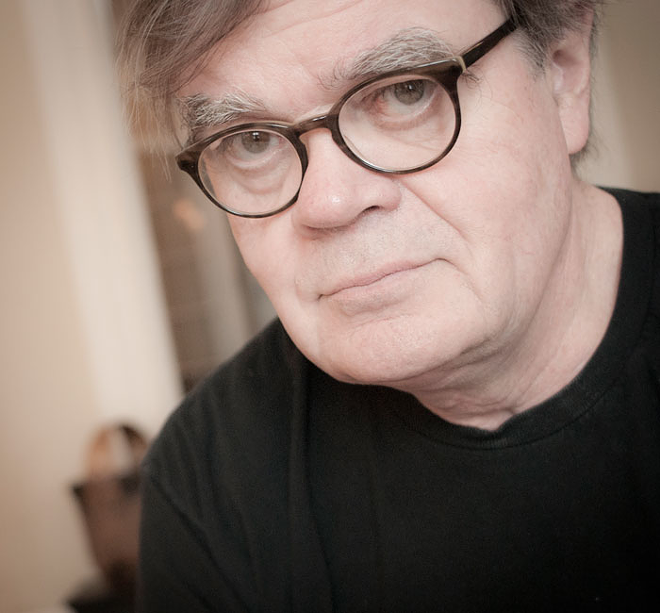 If you miss the soothing sounds and quaint Midwestern aphorisms of Garrison Keillor, humorist and former host of A Prairie Home Companion, coasting through your stereo speakers via NPR, spend an evening with the man himself at the Aronoff Center. The prolific storyteller is bringing his dry wit and wisdom to Cincinnati for a solo performance; expect masterful tales that weave together love, laughter and life lessons drawn from his own experiences, plus snippets of a cappella singing and a limerick or two. 8 p.m. Friday. $30-$70. Aronoff Center, 650 Walnut St., Downtown, cincinnatiarts.org.

Al Jackson is a stand-up comedian and TV host originally from Cleveland. Onstage he talks about things happening in his personal life, including raising a son. “I knew nothing about children before I had them,” he tells an audience. “My son had just turned 3 and my wife calls me and says, ‘Our son can read anything you put in front of him.’ ” Jackson, a former middle school teacher, wasn’t sure how impressive that was. Then his wife called a few weeks later while he was on the road and said their son had taught himself sign language using an iPad. “I’m like, ‘We’re not deaf. How do we know he’s doing it right? He could be throwing up gang signs.’ ” Showtimes through Sunday. $8-$14. Go Bananas, 8410 Market Place Lane, Montgomery, gobananascomedy.com. Break out the lederhosen and celebrate the city’s German roots as the MainStrasse Village Association hosts its 38th-annual Maifest this weekend. This six-block Bavarian spring tradition is the warm-weather counterpart to Oktoberfest and boasts a weekend’s worth of arts, crafts, traditional German dancers, live music, circus acts, festival food, an expanded Kinderplatz for the kids, a chalk art contest on Saturday and, of course, tons of German and local beers. Even the world-famous Goebel Goats will be there, grazing while you get your fest on. 5-11 p.m. Friday; noon-11 p.m. Saturday; noon-8 p.m. Sunday. Free. Goebel Park, 501 Philadelphia St., Covington, Ky. mainstrasse.org.

The Cincinnati May Festival — the oldest choral festival of its type in North America — has been reimagined this year, promising “a revolutionary new model of artistic collaboration and leadership” to provide a fresh approach. Spanning two weekends, the festival features choral masterpieces by Beethoven, Mendelssohn, Bach and beyond, performed by the Cincinnati Symphony Orchestra and May Festival Chorus alongside world-renowned conductors and soloists. Things kick off Friday with the May Festival premiere of Walter Braunfels’ “Te Deum,” which represents the composer’s spiritual journey after serving in World War I, followed by a performance of Beethoven’s Ninth Symphony under the direction of Markus Stenz. Highlights throughout the event’s duration include the May Festival Chorus and Youth Chorus’ annual concert at Cathedral Basilica of the Assumption (8 p.m. Sunday) and the Dream Project, a new immersive concert experience curated by conductor Gerard McBurney presented in two installments: A Midsummer Night’s Dream (8 p.m. Saturday) and The Dream of Gerontius (8 p.m. May 26). Through May 27. Ticket prices and locations vary. Visit mayfestival.com for a full schedule of events.

In recent years, the genre tag “Smooth Jazz” has come into the same disfavor as Prog, with both descriptors inspiring the notion that the music therein is comprised of overinflated puffery that is devoid of substance. The fact is, every genre is inflicted with artists that create nothing out of something and Smooth Jazz has its share, but Paul Taylor is certainly not among their number. The Denver-born, Las Vegas-based saxophonist has released 11 albums over the course of his 22-year career, collaborated with some of the biggest names in R&B (including Peabo Bryson, Regina Belle and Maxi Priest), guested with The Rippingtons and generally been a goodwill ambassador for one of music’s most maligned categories. Read more in this week's Sound Advice. Paul Taylor plays Live! at the Ludlow Garage Saturday. Click here for tickets/more show info. 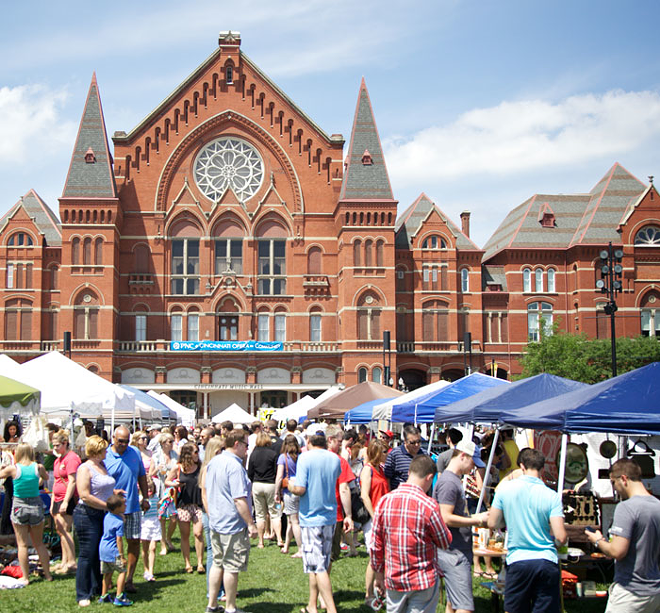 Cincinnati’s original curated urban flea market is a one-stop shop for fascinating finds, whether you’re looking to spruce up your home, grab a bite to eat or add a few things to your wardrobe. With more than 160 vendors stationed throughout Washington Park, the City Flea has a little something for everyone. Vendors include All About That Burn, wood-burning designs by local artist Sarah Henry; Game Day Feels, connoisseurs of sports-related accessories like bracelets and key chains; and Truckshop, a colorful clothing store literally on wheels (it’s located inside a bright yellow van). 10 a.m.-4 p.m. Saturday. Free admission. Washington Park, 1230 Elm St., Over-the-Rhine, thecityflea.com.

“Unconventional” doesn’t begin to describe Yngwie Malmsteen, the Swedish prodigy who has been cited by uncountable publications as one of the world’s greatest guitarists. At age 10, the Stockholm native — born Lars Lannerbäck — started his first band, a guitar/drums duo, with a friend. Two years later, he changed his name to Yngwie Malmsteen, a slight tweak on one of his middle names (Yngve) and his mother’s maiden name. Soon after, he combined his love of Classical music, particularly the work of violinist/composer Niccolò Paganini, with his love of guitarists Brian May, Uli Jon Roth and Ritchie Blackmore (his beacon influence), and converted it into the Neo-Classical-shredding style he helped popularize in the early ’80s. Read more in this week's Sound Advice. Yngwie Malmsteen brings his Yngwie J. Malmsteen's Rising Force to Madison Theater Saturday. Click here for tickets/more show info.

In dreams, David Lynch walks with us. In dreams, he talks with us. In dreams, we’re his, all the time. And here’s a little Lynchian secret — you can’t binge-watch dreams. That’s why filmmaker Lynch (Blue Velvet, Mulholland Drive) and his production partner Mark Frost have refused to sign with Netflix or Amazon to revive Lynch’s classic 1990-91 Twin Peaks cult television series. A singular mix of murder mystery and surreal journey into the subconscious, the original required that viewers experience it slowly. So, too, will the new series. The show’s long-awaited revival begins 9 p.m. Sunday on Showtime, with a special two-hour episode. Lynch will be allowed to carefully let Twin Peaks unfold over the course of its 18 episodes — no streaming-style episode dump; not even preview episodes for critics. Like before, it is all about those dreamy slow teases that have been a staple of Lynchian storytelling from the beginning. We do know that certain cast members are returning — Kyle MacLachlan, crucially, is again FBI Special Agent Dale Cooper in this Washington town, and Angelo Badalamenti is once more providing the unforgettably eerie music. Read more about the show here. Twin Peaks premieres 9 p.m. Sunday on Showtime.

Are you sick of having your dead scorpion sitting out without any interesting artistic accouterments or stately display? Solution: Join Meddling with Nature at Hail Dark Aesthetics for an evening of preserving and mounting these “pinchy, pokey little critters.” This hands-on, DIY class lets participants position and mount a provided Heterometrus cyaneus (aka Asian Blue Forest Scorpion). Frames, bell jars and wooden bases will be available for purchase. Because of their size — about 6 inches from claw to stinger — you could even try your hand at some light taxidermy and stuff the little buggers. And if scorpions aren’t your strong suit, Meddling With Nature also has upcoming workshops on beetle mounting, dove skinning and a general intro to taxidermy.6-8 p.m. Sunday. $69. Hail Dark Aesthetics, 720 Main St., Covington, Ky., meddlingwithnature.com.