The zoo gets spooky for HallZOOween; the Ohio Sauerkraut Fest prepares to dole out 7 tons of eats; and Amy Schumer brings her #SchumerTour to BB&T Arena.

Sipping fine bourbon on a fall afternoon in good ol’ Kentucky is the only way to ring in October. The second-annual Oak, Toast and Two Aging Barrels celebrates autumn with a variety of tastings and education on the streets of Covington. Boasting a variety of craft bourbon — local and national brands — the fest will take over Sixth and Main with three days of music, food and drinks galore. Friday evening kicks off with a bourbon dinner — a four-course meal with four spirits — with guest distiller John Foster of Smooth Ambler Spirits. On Saturday, guests are treated to tasting seminars, live music, conferences and presentations from many prestigious bourbon distillers and local aficionados. Sunday brings things home with a bourbon brunch with five courses and five cocktails. Friday-Sunday. Prices vary. 406 W. Sixth St., MainStrasse Village, Covington, mainstrasse.org.

It’s a big-ass weekend block party in the Gaslight District during the fifth-annual CliftonFest. Ludlow Avenue closes to traffic and transforms into a family-friendly carnival thoroughfare with food, live music and arts and crafts. There will be family games in Burnet Woods, chalk artists creating masterpieces along Ludlow, a beer tent on Telford Avenue, a pet parade, wine tastings, a Saturday morning 5k, face painting and music on an outdoor stage from bands including Lagniappe, The Almighty Get Down and the Phil DeGreg Trio Brasilerio, among others. 6-10 p.m. Friday; 11 a.m.-11 p.m. Saturday. Free admission. Ludlow Avenue, Clifton, cliftonfest.com.

Journey back to 1933 Los Angeles at Know Theatre. In a world-premiere production of Joseph Zettelmaier’s new play, a washed-up private investigator takes on the investigation of the gruesome murder of a literary agent. Four eccentric writers are the suspects, and before long their storytelling begins to shape reality. The genre-bending comedy mystery jumps between sci-fi, romance, adventure and horror. Zettelmaier wrote All Childish Things, a Star Wars caper tale that was a 2015 hit for Know. Pulp’s off-kilter story features Cincy Shakes actor Paul Riopelle as the beleaguered gumshoe. Through Oct. 29. $25. Know Theatre, 1120 Jackson St., Over-the-Rhine, 513-300-5669, knowtheatre.com. 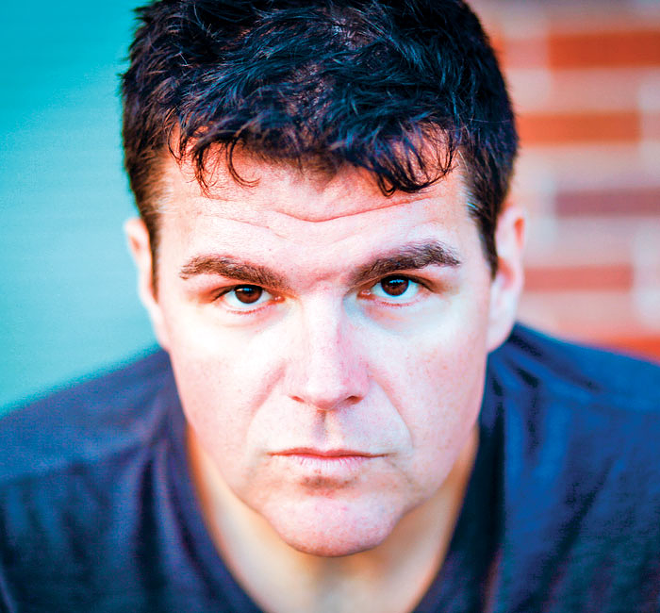 The trip down under to Australia gave Canadian comedian Ian Bagg a chance to visit his mother’s homeland, which he enjoys immensely. “Australians are the most racist people, and they have no idea,” Bagg says. “They had a prime minister there (Julia Gillard) that was a redhead and they used to call her ‘ranga,’ which is short for orangutan. Now, if they can be racist to a white person and they’re white, they’re the most racist people in the world.” All joking aside, he is fond of the Aussies. “They think they’re quiet and that North Americans and Asians are loud,” he says. “If you’ve ever been on a ski hill in North America with an Australian, you know they’re the loudest. But I love them. Really good people.” While no subject is off limits to Bagg onstage, he does shy away from politics, but for practical reasons. “I’m a landed immigrant. I can’t vote, so I don’t feel I have anything to say.” Showtimes Thursday-Sunday. $17-$20. Funny Bone Liberty, 7518 Bales St., Liberty Township, 513-779-5233, liberty.funnybone.com.

Writer, director, Trainwreck star and comedian extraordinaire Amy Schumer is bringing her #SchumerTour to BB&T Arena. Schumer is currently starring in her fourth season of Inside Amy Schumer — her award-winning Comedy Central television series — and has worked on a vast number of comedic ventures and helped pave the way for other female comedians. Her live show promises plenty of surprises but will keep audiences laughing at the boundary-pushing stand-up she’s become known for. 8 p.m. Saturday. $42-$109. BB&T Arena at Northern Kentucky University. 100 Louie B Nunn Dr., Highland Heights, Ky. thebbtarena.com.

In the spring of 2013, local artist Ballard Borich began a series of paintings, whereby he daily watered discarded tree parts (twigs, sticks and otherwise) with watercolor and gouache “in the hope of being a successful magician or alchemist or necromancer.” In the written artist’s statement, Borich says, “I was not drawing twigs. I was attempting to represent the energy that made them.” It seems apt, then, that he would find inspiration in the African sculptural collection at the Joseph Clark Gallery, which features a large selection of artworks and ceremonial objects also made from wood. For Transformations, Borich installed his framed works on paper around Clark’s pre-existing collection. 6-9 p.m. Saturday. Free. 4038 Hamilton Ave., Northside, josephclarkgallery.com.

How will you celebrate your 75th birthday? A cozy celebration at home or skydiving? Jazz legend Chick Corea is doing a little of both for his 75th — he’s in the midst of an ambitious worldwide tour, which has to be exhilarating but also familiar, considering the miles Corea has traveled with his music on the road over the years. In his five decades as a professional musician, the pianist/keyboardist has scored 22 Grammys, worked with fellow giants and pioneers of the genre (including a crucial stint with Miles Davis) and has been a fearless explorer, pushing boundaries even to this day, as his celebratory tour (featuring performances in a variety of configurations) shows. Corea began his current global jaunt with a performance on the White House lawn, and later this month he’ll wrap things up by playing a special month-long residency at the Blue Note in New York, doing 80 shows, collaborating with 60 big-time players and playing everything from progressive Fusion and duets with other pianists to orchestral Jazz and experimental electronic music. Joining Corea for his Cincinnati visit are bassist Eddie Gomez and drummer Brian Blade. 7 p.m. Saturday. $25-$90. Gallagher Student Center Theater, Xavier University, 3800 Victory Parkway., Evanston, xavier.edu/musicseries.

On Oct. 3, 1970, the Waynesville Retail Merchants planned on having a sidewalk sale, and to make things a little more interesting, one member suggested a sauerkraut dinner be served as part of the event. With this decision, the Ohio Sauerkraut Festival was born. The first event sold 528 pounds of sauerkraut to approximately 1,500 visitors; today, the festival serves more than 7 tons of sauerkraut to more than 350,000 visitors each year, along with over 450 craft and artisan vendors, live entertainment and visitors from all across the nation. For nearly 47 years, The Waynesville Chamber of Commerce has made the festival a major fundraising event for many of the area’s civic and charitable groups. Sauerkraut lover or not, it’s worth checking out. 9 a.m.-8 p.m. Saturday; 9 a.m.-6 p.m. Sunday. Free. Village of Waynesville, 10B North Main Street, sauerkrautfestival.com.

Halloween fun is “always hairy, never scary” at the Cincinnati Zoo. Dress like your favorite animal and experience daily special encounters throughout the grounds, during which bears, tigers, otters, elephants and many other species roll, toss and snack on pumpkins. Catch a magical ride aboard the Hogwarts Express and grab something sweet from wild trick-or-treat stations. Other slight frights include Phil Dalton’s Theater of Illusion shows at 1 and 3 p.m., “scare-ousel” rides and the search for golden Frisch’s Big Boy statues: Two figures will be hidden in the zoo each day of HallZOOween, and the first two visitors to discover them receive $150 worth of zoo merchandise. Noon-5 p.m. Saturdays and Sundays in October. Free with general admission: $18 adults; $13 kids and seniors. Cincinnati Zoo and Botanical Garden, 3400 Vine St., Avondale, cincinnatizoo.org.

ONSTAGE: VANESSA WILLIAMS WITH THE POPS

Vanessa Williams has conquered Broadway in Into the Woods, After Midnight and Kiss of the Spider Woman. If you didn’t catch her in any of those, you might have watched her dominate television in Desperate Housewives, Ugly Betty or The Good Wife. For one night only, she’ll be in town to take over Cincinnati. With help from the Cincinnati Pops Orchestra, Williams will sing songs that reach out to every corner of her impressive career, including “Dreamin’” and “Save the Best For Last.” 7 p.m. Sunday. $25-$125. Taft Theater, 317 E. Fifth St., Downtown, cincinnatisymphony.org.