ART: We... by Tim McMichael is on display at Clay Street Press. See a review here.

David Barbe’s Indie Rock credentials are impressive — besides being the bassist in Sugar (the band Bob Mould formed after Husker Du ended), he is also a noted producer and engineer, working on projects by the likes of Deerhunter, Drive-By Truckers and the impossibly underrated Glands. He’s also a longtime resident of “College Rock” capital Athens, Ga., where he has played in several bands over the past 30 years and where he is currently the head of the University of Georgia’s music business program. Barbe has also released a trio of well-received solo albums, this summer putting out his latest (and first in seven years) 10th of Seas, a compelling effort that places fuzzy vocals, buzzy guitars and a glaze of tickling psychedelia on top of a strongly melodic songwriting base. Barbe’s music shows the perhaps unavoidable influence of Athens’ pioneering music scene — there are frequent sniffs of swaggering jangle and slanted Pop, featuring hooks that Athens-adjacent singer/songwriter/producer Mitch Easter would be proud to call his own — but it’s also tinted by broader genres like Psych Rock, Power Pop and the California sound of the Paisley Underground. Barbe is touring backed by New Madrid, an Athens’ Pop/Rock band that he has worked with frequently in the studio. 9 p.m. Wednesday. Free. MOTR Pub, 1345 Main St., Over-the-Rhine, motrpub.com. — MIKE BREEN

From the 1950s to the 1980s, more than 130 hand-built animatronic elves were displayed in interior vignettes and the exterior windows of downtown’s Shillito’s department store each holiday, bringing Santa’s workshop to life. Today, they’ve been refurbished and restored and have a home in Mariemont, where visitors can see 12 animated scenes of elves building toys, sorting mail and more. Kids can even drop letters to Santa in a big blue mailbox on their way in. It’s the elves’ last season at this location and the owners don’t know where or if they’ll be on display next year, so now’s your chance to see them if you want to/haven’t. Through Dec. 31. $4. 6940 Madisonville Road, Mariemont, thesantaworkshop.com.  — MAIJA ZUMMO

Celebrate the release of Star Wars: Episode VIII – The Last Jedi with a screening of the super weird and ridiculous 1978 Star Wars Holiday Special. The 98-minute spin-off musical features the original cast (plus a singing Bea Arthur!) and a plot involving Han Solo and Chewbacca attempting to get to Chewbacca’s home planet of Kashyyyk to celebrate Life Day with his wife and kid. The special only aired once — everyone thought it kind of sucked so it was never rebroadcasted or officially released on video. It’s a cult thing these days and hard to find (unless you know how to use YouTube), but you can watch it at The Video Archive Wednesday on a relatively big screen. The bar is currently hosting A Yuletide Nightmare pop-up in honor of the holidays, with decor referencing another cult favorite: The Nightmare Before Christmas. 7:30-10 p.m. Wednesday. Free admission. The Video Archive, 965 E. McMillan Ave., Walnut Hills, facebook.com/videoarchivecincinnati. — MAIJA ZUMMO

Photo: Mikki Schaffner Photography
Every Christmas Story Ever Told (And Then Some)

HOLIDAY: Every  Christmas Story Ever Told (And Then Some)

It might be hard to believe, but 2017 is the 12th straight year that the Cincinnati Shakespeare Company has offered this zany show: 90 minutes of silliness that pokes fun at every BHC — that’s a “Beloved Holiday Classic.” A Christmas Carol? Check. It’s a Wonderful Life? Check. The Grinch? Check. Frosty the Snowman? Watch out. Rudolph? Well, kind of (there’s a way around a copyright problem). This production is one of Cincy Shakes’ most popular shows, annually crushing attendance and sales records. That’s sure to happen again with lots of seats close to the action up for grabs in the company’s new Over-the-Rhine theater. Standing room tickets are available before Christmas. Through Dec. 31. $38. Cincinnati Shakespeare Company, 1195 Elm St., Over-the-Rhine, cincyshakes.com.  — RICK PENDER 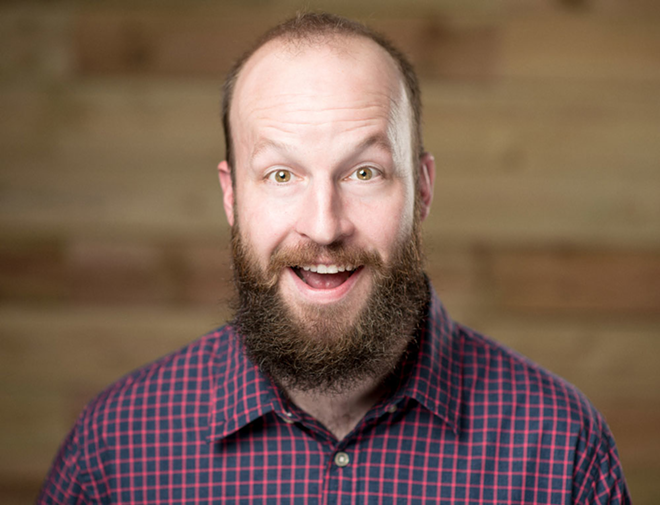 “We put Christmas lights up for the first time this year,” says comedian Gabe Kea, who settled into a cul-de-sac in Loveland with his family last year. Kea, the son of St. Louis Blues hockey legend Ed Kea, came to Cincinnati to pursue his comedy career several years ago. “I wish we would have put a giant blue note on our roof,” he says referring to the Blues’ iconic logo, “but instead we put a big star so I guess we are posing as Dallas fans for the time being.” Lately, Kea has been headlining around the Midwest and appearing regularly on The Bob & Tom Show. Lucas Waterfill, who won the Funniest Person in Cincinnati this past year, will feature for him at Go Bananas this week. Blake Hammond, who was a finalist in that same contest, will emcee. Through Sunday. $8-$14. Go Bananas, 8410 Market Place Lane, Montgomery, gobananascomedy.com. — P.F. WILSON 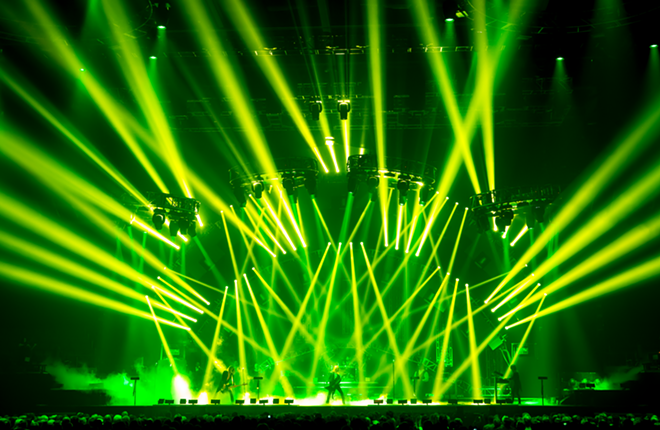 Nothing says holiday car commercial more than the electric ring of “Carol of the Bells” as performed by the Trans-Siberian Orchestra, but the group’s annual holiday tour is a much more interesting and immersive experience. They’ll be performing their Rock opera, The Ghosts of Christmas Eve, which has a loose plot line that follows a runaway girl as she leaves home and seeks refuge in an abandoned theater (why?) only to be visited by ghosts of the building’s past. The plot is basically manipulated in service of the music, with a lineup featuring holiday fan favorites including “O Come All Ye Faithful,” “Christmas Eve/Sarajevo 12/24” and “Good King Joy.” Expect plenty of laser lights, fog machines, shooting flames and giant visual displays. 4 and 8 p.m. Thursday. $40-$76. U.S. Bank Arena, 100 Broadway St., Downtown, usbankarena.com. — MAIJA ZUMMO

This Yule Ball has more in common with a golden snitch than Rudolph’s red nose. It’s the 15th anniversary of Harry Potter and the Sorcerer’s Stone, and the Northside Yacht Club is celebrating with a “Potter-themed night of holiday magic.” That’s right, geeks. Wear your best Gryffindor or Slytherin (or Ravenclaw or Hufflepuff) costumes to compete for the House Cup, test your skills and knowledge in a Tri-Wizard Tournament and drink some thematic cocktails (there better be butter beer). Live wizard Rock from bands including Tonks & the Aurors, Neville’s Diary, Ludo Bagman & the Trash and more will be onstage all night. Dress like a muggle if you feel like being a dick. 8-11:30 p.m. Friday. $7 for 21 and up; $10 ages 18-20. Northside Yacht Club, 4227 Spring Grove Ave., Northside, northsideyachtclub.com. — MAIJA ZUMMO

Photo: Lauren-Edward Film
"Everything Beautiful is Far Away"

FILM: Everything Beautiful is Far Away at The Mini Microcinema

Los Angeles-based filmmakers and partners (and former Cincinnatians) Pete Ohs and Andrea Sisson return to the Queen City to screen their latest film, Everything Beautiful is Far Away, a recent winner of the U.S. Fiction Cinematography Award at the 2017 LA Film Festival. Written and directed by Ohs and co-directed by Sisson, the film tells the story of a lonely man, his robot-head companion and a determined young woman who navigate a harsh environment in search of a mythical lake. Like much of the work the pair have done in the past, expect epic landscapes and gorgeous cinematography throughout. 7 p.m. doors; 7:30 p.m. screening Friday. $5 suggested donation. The Mini Microcinema, 1329 Main St., Over-the-Rhine, mini-cinema.org. — MARIA SEDA-REEDER

If the holidays feel like they aren’t actually the most wonderful time of the year for you (the end-of-year doldrums are real), Queen City Radio is hosting a Nightmare Before Christmas party to make the season a little more spooky. Wear your ugliest and scariest holiday sweater and indulge in themed wintry drinks, like eggnog and hot cider with Maker’s Mark, before hopping in the Framester photobooth. This holiday happening will also raise funds for the Lighthouse Youth Organization. 8 p.m.-2 a.m. Saturday. Free admission. Queen City Radio, 222 W. 12th St., Over-the-Rhine, qcrbar.com. — MAIJA ZUMMO HOLIDAY: Feast of the Seven Fishes

For more than 40 years, the Cincinnati Citywide Kwanzaa Committee has been bringing together area communities and families to celebrate seven nights of Kwanzaa with inspirational and historical events, live entertainment and special awards. The week kicks off at the Carl Lindner YMCA with a recognition of the Kwanzaa principle of Umoja, or unity. The event includes a Kwanzaa Holiday Bazaar Marketplace, a children’s African drum workshop, West African dance classes, African-style head-wrapping presentations, health and wellness information and a Taste of Africa. Events follow throughout the week at different venues to honor the rest of the “first fruits” — Self-Determination, Collective Work and Responsibility, Cooperative Economics, Purpose, Creativity and Faith. 3-8 p.m. Tuesday. Free. Carl Lindner YMCA, 1425 Linn St., Over-the-Rhine, bit.ly/2BYdJP5. — MAIJA ZUMMO