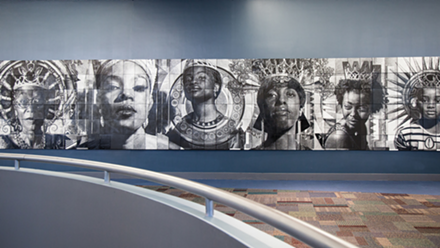 It’s fitting that you have to go to some effort to see “Wall of Queens,” a tribute to scratching and surviving that hangs in an upper level of the Duke Energy Convention Center. The mural was installed in the fall of 2017 after artist James Pate and a team of ArtWorks apprentices spent months etching away at 280 scratchboard panels to create a stunning panorama of seven African-American females. Their number is a reference to the seven hills of the Queen City, and the rippling layout of the tiles evokes the Ohio River, a symbol of freedom dividing the North and the South. Pate calls the black-and-white work “another wing of humanity” inside the convention center. ArtWorks CEO Tamara Harkavy names it “one of the favorite things I’ve ever seen.” Duke Energy Convention Center, 525 Elm St., Downtown, duke-energycenter.com/public-art-tour.