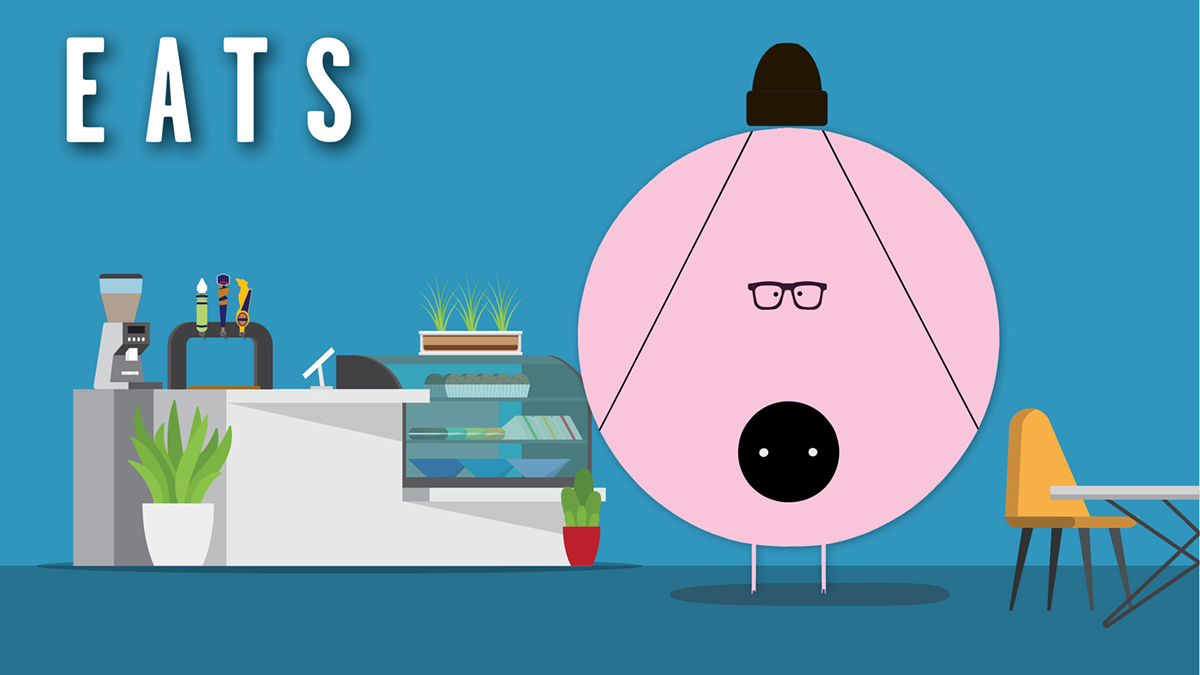 Rich’s Proper Food and Drink opened in November, adding to Covington’s burgeoning restaurant scene. Located next to Duveneck Square and named after a watch store that used to exist in the space decades ago, Rich’s offers New Orleans-inspired Creole-meets-Southern food, from muffuletta sandwiches to mac-and-cheese-stuffed egg rolls. Every Wednesday night, they do East and West Coast oysters for $1 per bivalve. (Note: That doesn’t include specialty oysters, like shooters or fried ones.) To make the deal even better, glasses of sparkling wine are $5 and a bottle is only $25. If oysters aren’t your thing, then sample the red beans and rice burrito, or a cocktail made with gummy worm syrup and coffee grounds (yes, that’s a thing, and it’s delicious). Or if you’re feeling Mardi Gras-ambitious, try the Proper Mule: a bottle of bourbon or vodka mixed with ginger beer and poured into a gallon-sized copper pitcher, priced at $60. To share or not to share — that’s the question. Rich’s Proper Food and Drink, 701 Madison Ave., Covington, facebook.com/richsproper.

A few years ago, nibbling on roasted, curried chickpeas in a former strip club while sipping on craft cocktails didn’t seem possible — that is until cocktail haunt The Globe opened on the once-seedy Fifth Street/Madison Avenue strip in Covington in the former Club Venus. (They even have a drink named after the original shower-show destination, made with prosecco and orange blossom water.) Though the focus here is on bourbon — the bar is on the B-Line NKY bourbon tour and their Fifth Street Manhattan is a must-try — they do offer a small snack menu: a charcuterie board, baked brie, a hummus plate and the aforementioned crispy chickpeas. Served warm in a bowl with a dash of seasoning, the savory snack is the right amount of food to fill your stomach enough to handle more cocktails. And during The Globe’s glorious happy hour, cocktails are $2 off…and the chickpeas are lowered from $4 to $3. The Globe, 12 E. Fifth St., Covington, theglobecov.com.

Downtown’s Yum Yum feels like a time machine sitting inconspicuously among abandoned-looking storefronts on Race Street, with a fading sign boasting the offer to “eat as if you were in China.” Dinner service is from 6-9 p.m. Wednesday through Saturday but the business hours are regarded more as a suggestion than a rule. And remember to stop at the ATM beforehand; it’s cash only. Run by Tom and Mei Lin, the Szechuan restaurant opened its doors in 1975 and not much has changed since then: neither the décor — wood paneling, crimson tablecloths and ornate, low-hanging chandeliers — nor the menus, whose yellowed pages have sustained over 40 years of service with price markups penciled in the margins to account for decades of inflation. And the same typewritten dishes on those menus are still served for dinner: Yum Yum Mein, Sichuan Pepper Steak and Ding Dong Chicken are crowd favorites, and prix fixe dinners ($40 for two) haven’t gone out of style just yet. If the front door is locked, give it a good stiff knock and allow yourself to be surprised. Yum Yum Chinese Restaurant, 909 Race St., Downtown, 513-721-7705.

In 2009, former University of Cincinnati football player Leo Morgan opened up a restaurant to serve Clifton the authentic Jamaican food he had previously been making for his teammates on a smaller scale. Just five years later, Guy Fieri gave Island Frydays an honorary residency in Flavortown, USA thanks, in no small part, to their snapper dinner. A whole red snapper is fried to perfection, crispy skin and all, and bathed in spicy escovitch sauce — a classic Jamaican condiment — to give the ordinarily mild fish a strong kick. The moist meat glides off its skeleton like an overused cliché (even with the plastic fork you’re given in the to-go box) and supplies a delicate flaky texture with each scrumptious bite. Pick any two sides to go along with this prize catch, like their fried sweet plantains and hearty, well-seasoned jerk fries. After finishing this stunning seafood, you may find yourself looking like the picture of Rick Ross hanging on their wall: arms out, head to the sky in solemn appreciation of your satisfied stomach. Island Frydays, 2826 Vine St., Corryville, islandfrydays.com.

Sometimes you have days at work when you’re so busy you can barely get up to pee, let alone figure out how or what you’re going to feed yourself. Thankfully, the true angel humans at 53T Courier have been bringing lunch (and dinner) to downtowners (and CityBeaters) via bicycle in the rain, sleet, snow and heat and when they just can’t get up from their desks since 2014. Pronounced “fifty-three tee” — for the number of teeth on a road bike’s chain ring — the company, founded by Ian Bulling and Dave Adams, is rider-owned and operated and “comprised of experienced, dedicated cyclists who love what they do.” From 9 a.m.-9 p.m. Monday through Friday and 11 a.m.-9 p.m. on Saturday, these be-spoked saviors deliver food from an ever-growing list of local restaurants throughout downtown, OTR and Northern Kentucky, like Cheapside Café, The Gruff and Pho Lang Thang. They also perform other assorted bike messenger services like delivering parcels, papers and etc. Sure, the restaurant selection may be greater through conglomerates like Uber Eats or Grubhub, but Uber Eats doesn’t have Ian — or his giant backpack — hand delivering your lunch to you at your desk, still hot and intact (even if you get a Vietnamese drip coffee), while you’re trying to make a deadline. It is only a slight exaggeration to say some of us here might starve without him and 53T. 53T Courier, 53tcourier.com. 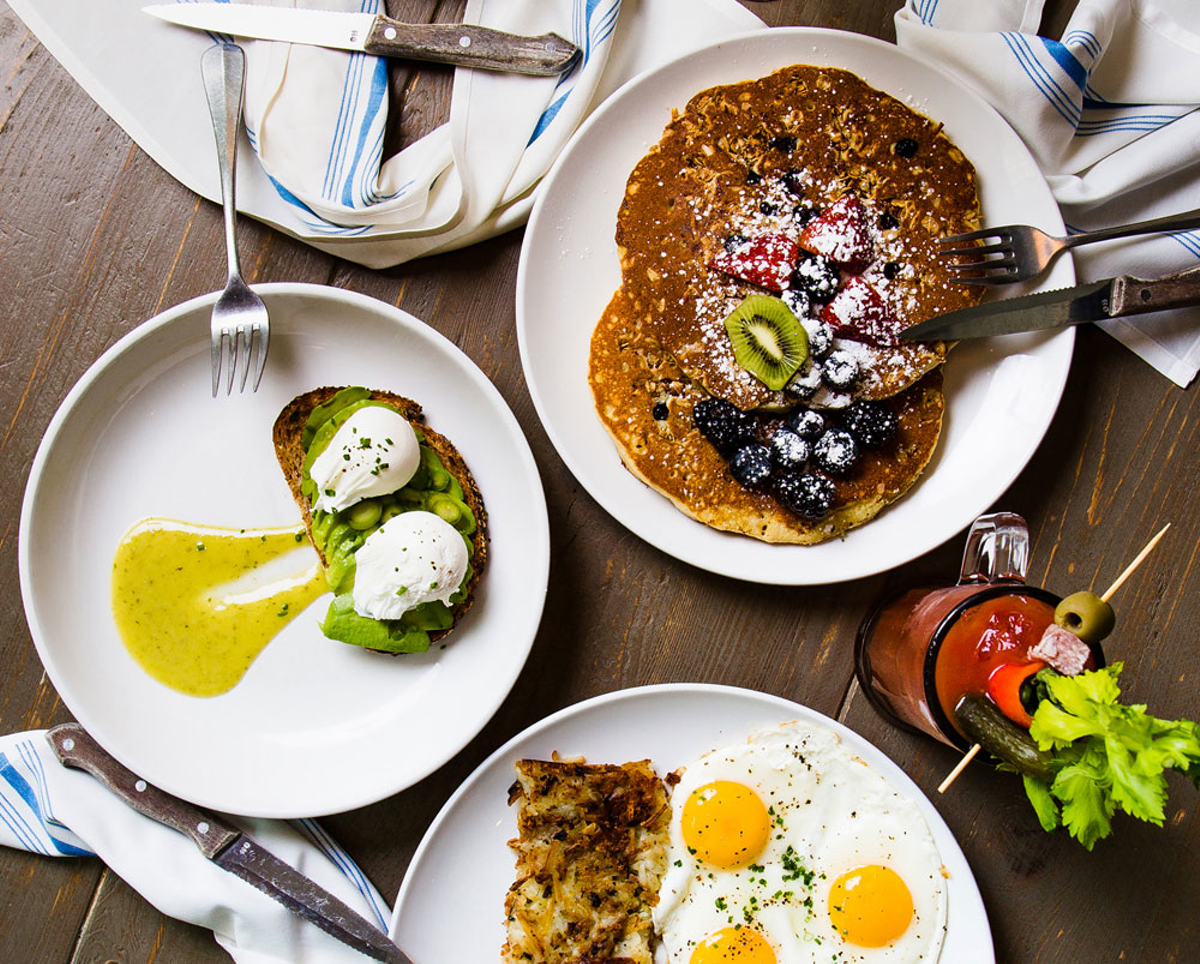 Don’t be dismayed if the line is out the door when you arrive at Maplewood Kitchen and Bar downtown. For one thing, it’s worth the wait, but just as importantly, they have a super-efficient operation that moves you along quickly. While you wait, you can ponder your many excellent choices — starting with cocktails. There’s the roasted tomatillo bloody mary (made with Tito’s vodka, house-roasted tomatillo mix and a super greens cold-pressed juice blend for #health), a cold-pressed juice mimosa and a cucumber sangria, made with Sauvignon Blanc, among other excellent options. And if you aren’t just drinking your breakfast/lunch/dinner, edible options range from fancy toasts to power bowls and a roasted rotisserie chicken. But the dish that will haunt your dreams is the lemon ricotta pancakes with seasonal fruit, berry compote and local syrup. This stack of two flapjacks has enough of a fan following that it found its way to the TODAY Show in September and into the mouths of Carson Daly and Al Roker. Maplewood also made Travel + Leisure’s list of the top 25 places to eat pancakes last year. So go for the pancakes, stay for the drinks and add a side of Daisy Field Farms bacon if you’re in an indulgent frame of mind. A second Maplewood location opened in Deerfield last year for double the fun. Maplewood Kitchen and Bar, 525 Race St., Downtown; 5065 Deerfield Blvd., Mason, maplewoodkitchenandbar.com.

If you’ve never had the pleasure of trying it, ceviche is raw seafood cured in citrus juice and spiced with exotic peppers. Angel Batista, co-owner of Maize and a native of Puerto Rico, says it should taste like the ocean — and that’s exactly how you’d describe his restaurant’s dish, constructed with a base of red snapper and shrimp. It is perfect. Crisp, bright, tangy, fresh. The fish are plump and plentiful and complemented by pops of diced mango and serrano pepper — tossed in after the acidity of the lime cures the seafood. Don’t let that juice at the bottom of your glass go to waste; it’s called leche de tigre, or “tiger milk,” which you can drink right out of the container. It’s considered an aphrodisiac, so make sure your date gets a good taste, too. The remainder of the dishes at Maize are excellent as well. The restaurant takes its name from a corn flour dating back some 10,000 years, which serves as the basis for the eatery’s arepas, cachapas and empanadas and acts as an access point for the rich world of Latin American cuisine. To that end, the menu is colorful and varied, with dishes from across the region that complement one another while retaining their traditional roots: Puerto Rican lechonchetta con yucca al mojo, Venezuelan pabellón criollo and Mexican elote topped with cotija cheese, queso fresco and cayenne. Maize OTR, 1438 Race St., Over-the-Rhine, maizeotr.com.

From the outside, Darou Salam may seem small — it is set back, nestled underneath trees and shares the same building as the Northside Tavern. You may even miss it at first glance. But although humble in appearance, this is Cincinnati’s best-kept secret for authentic African food. Darou Salam offers Senegalese cuisine ranging from lamb dibi, which is grilled lamb paired with an onion-mustard sauce, to firir, a fried whole tilapia (yes with the head — but don’t be scared, it’s tasty), and bissap sorrel, a famous Hibiscus juice and Senegalese favorite. Darou Salam, 4163 Hamilton Ave., Northside, 513-681-3663.