The New Yorker’s food correspondent, Helen Rosner, gave a nod to Covington’s very own Anchor Grill in an article titled “The Best Things I’ve Eaten This Decade.” That’s right: Mentioned among bites from New York City, Los Angeles, Austin, Texas and across the globe is the Anchor Grill’s G.L.T. (goetta, lettuce and tomato). She writes that the diner is “alluringly grimy” and has been open “twenty-four hours a day, seven days a week, since (as far as I am aware) the beginning of time.” Both of which are apt descriptions. Also fitting? She says that she encountered the Lynchian-esque diner in a hungover stupor. Rosner mentions the restaurant under the subhead “some really excellent sandwiches,” where she writes that, “of the hundred-ish bites and meals that stand out...nearly a quarter belong to the category of Stuff Between Bread.” The hole-in-the-wall diner serves up grub backdropped by a cozy atmosphere, complete with knick-knacks and an animatronic Jazz band. Stick a few quarters in the Anchor’s Jukebox and watch ‘em play well into the witching hour. Wood-paneled walls and vinyl-covered booths give the locale a distinct 1970s vibe. Not only are they known for their goetta (the Glier’s Goetta factory is right across the street), but they also serve up classic eats like burgers, omelets, chili and more. Here’s a toast to the Anchor Grill, the place that — according to its glowing neon sign — “may doze, but never close.” Anchor Grill, 438 W. Pike St., Covington, 859-431-9498, searchable on Facebook. 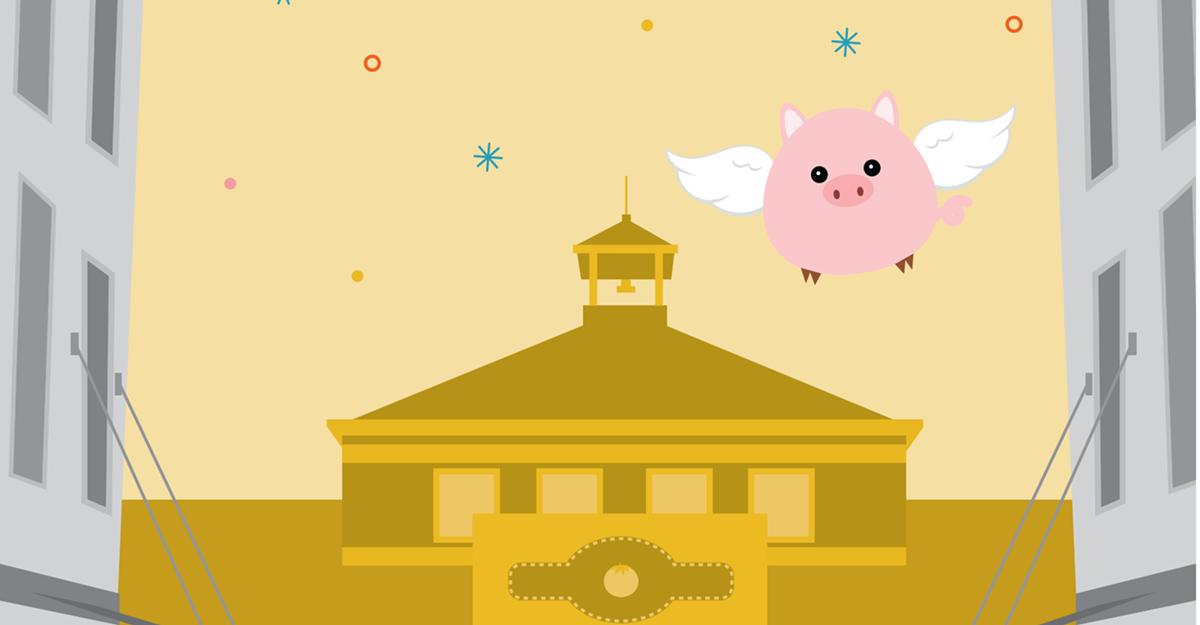 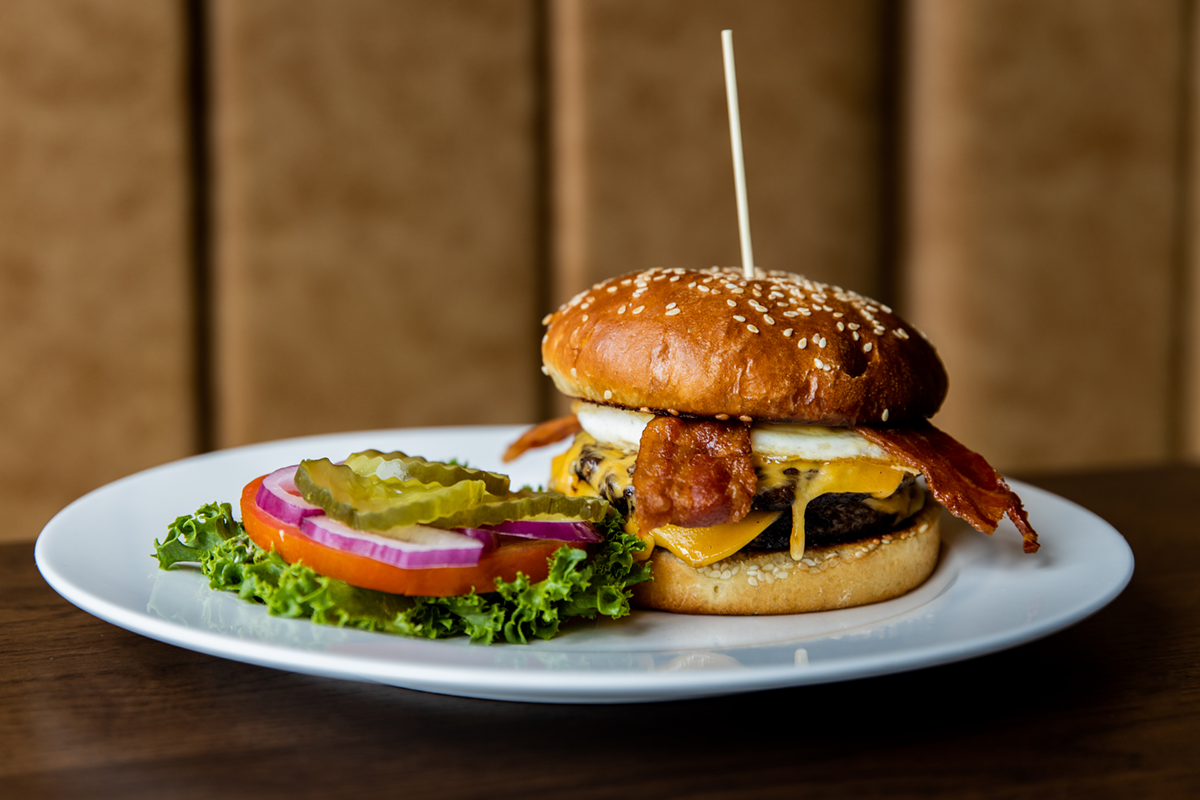 Chef Jose Salazar opened Goose & Elder, a sort of comfort food destination with self-described “Midcentury grandma” décor, adjacent to Findlay Market last year. It’s the third in the local favorite’s restaurant portfolio, which includes the eponymous New American Salazar (opened in 2013) and the Spanish/Latin American Mita’s (opened in 2015). Sydney Fisher is chef de cuisine here but Salazar himself greets patrons and puts finishing touches on just about every plate coming out of the kitchen. Though it feels more casual or at least more affordable than Salazar’s other eateries, Goose & Elder’s menu is just as creative, boasting fun takes on easy eats. Chicken wings are covered with Calabrian chili sauce and served with parmesan dip; the baked mac and cheese is infused with pickled jalapeno; fall-off-the-bone duck leg confit is served over grits; and the fried bologna sandwich comes topped with American cheese, pickles, coleslaw, an over-easy egg and potato chips. Retro cocktails like the Harvey Wallbanger and White Russian add a fun twist. And if you stop by for lunch during the week — specifically between 11:30 a.m. and 3 p.m. Tuesday through Friday — don’t sleep on the burger deal. You can get a Royale Goose burger, featuring grass-fed beef, American cheese, lettuce, tomato, onion, pickle and Dijonnaise on a sesame bun, plus crinkle cut fries and a soft drink for $10. Pretty sweet because usually all of those options come a la carte. Goose & Elder, 1800 Race St., Over-the-Rhine, gooseandelder.com.

Tucked away in a strip mall along Dixie Highway and helmed by a former U.S. Army Sergeant and family (look for veteran and service member discounts), Sake Bomb in Erlanger is a staple of sorts among Northern Kentuckians. Serving up Korean and Japanese grub — including sushi, bento boxes, ramen, stone bowls and more — the restaurant also touts items that cater to a variety of dietary needs, from vegetarians to those who need or want to go gluten-free. Sake Bomb has also developed dishes that cater to those with diabetes, including a bowl made with barley/brown rice and a medley of veggies: bean sprouts, spinach, lettuce, carrots, beets, zucchini, mushrooms, pickled radish, broccoli and kimchi — all topped with an egg. In another quirky turn, you can also feast on goetta fried rice here and green tea ramen. Bonus: Sake Bomb keeps the kiddos entertained with DIY sushi classes. Sake Bomb, 3072 Dixie Highway, Erlanger, sakebombcatering.com.

In 2014, Sarah Dworak quit her real estate job in favor of full-time pierogi making, pressing out the little Eastern European potato dumplings by the dozen to sell to customers at her Findlay Market storefront and grocers and restaurants throughout Cincinnati. By 2018, her Babushka Pierogies business occupied a late-night window on nearby Main Street at the future home of Wodka Bar, a homage to all things vodka and traditional Slavic delicacies. Between flights of house-infused spirits, guests can snack on bites of caviar in puff pastry, pickled fish and vegetables, smoked meats and cheese and butter on dense, dark rye bread. Of course, there are also plenty of pierogies and kielbasa bowls to scarf down — get them for dinner or a happy hour snack or get comfy for Sunday pierogi brunch in the luxe bar, finished with all the intricacies of Eastern Orthodox architecture. And fear not: The walk-up window is still open for dinner and late-night bites (and lunch on the weekends) with a streamlined menu of what one could consider “drunk food.” There’s a Polish sausage sandwich (like a fancy hot dog), your choice of four pierogi, a vegetarian 4-way pierogi stuffed with lentil chili and topped with cheddar cheese, sour cream and Frank’s Redhot and the crown jewel: Pizzarogies. Pizzarogies are the Totino’s Pizza Rolls of the pierogi world — deep fried and full of pepperoni and provolone, served with dipping sauce. And you don’t even need to turn on your toaster oven. Wodka Bar, 1200 Main St., Over-the-Rhine, wodkabarotr.com.

Vogue magazine and Food & Wine both released a list of their “most anticipated” American restaurant openings of 2020 and, surprisingly, a forthcoming Queen City eatery popped up on each: Khora. Khora is slated to open in spring 2020 in downtown’s new Kinley Hotel (the one going in the building where the old Payless shoe store was) and will be helmed by chef Edward Lee and executive chef Kevin Ashworth. The Vogue round-up — which includes restaurants in cities like Boston, L.A., New York and Chicago — highlights Khora in its list of 27 eateries from some of “the country’s most iconic cooks” and other international big-name chefs. Food & Wine has it called out in its gang of 16. And both mention Ashworth’s plan for his inspired menu. “Ashworth, who worked alongside Lee for over a decade in Louisville at 610 Magnolia, MilkWood, and Whiskey Dry, is from the Cincinnati area, and is plotting fun twists on regional classics — including a pasta inspired by Cincinnati chili,” says Food & Wine. The pasta-driven operation will be a play on the restaurant name, which apparently comes from the word “khorasan,” an ancient grain. Khora, 37 W. Seventh St., Downtown, vhghotels.com. 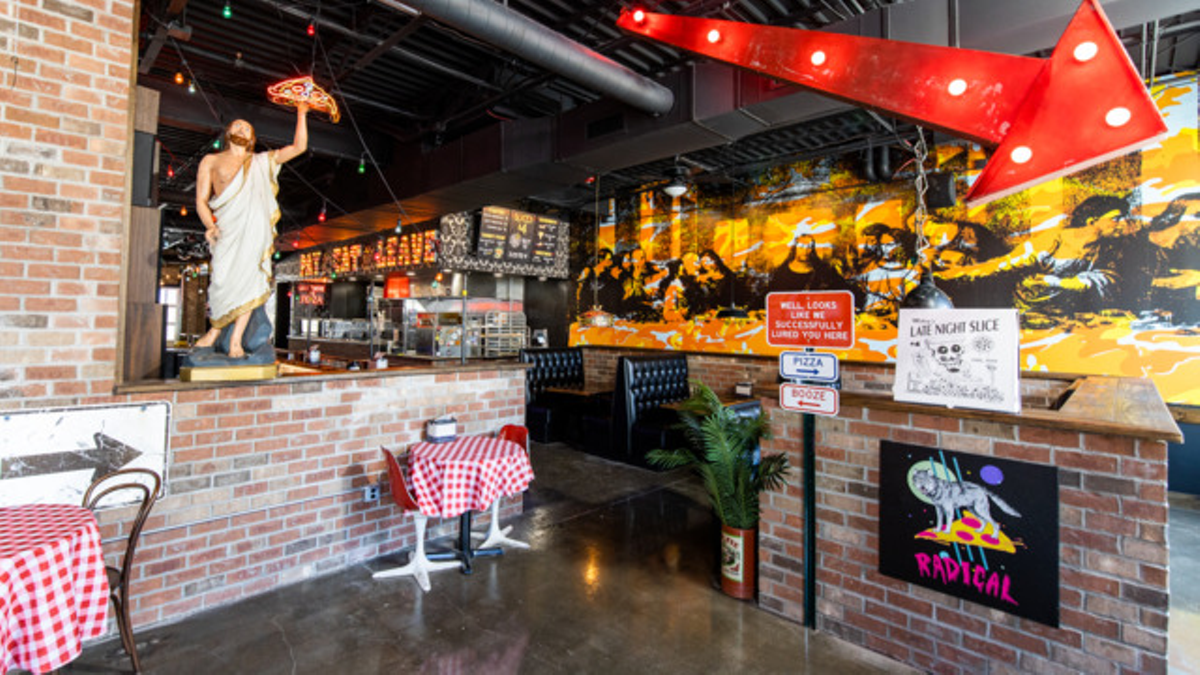 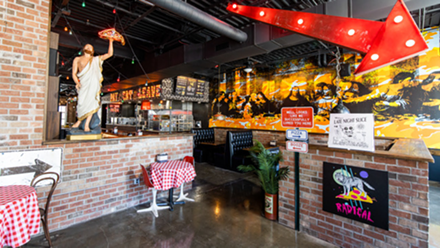 Mikey’s Late Night Slice is an Instagram-feed feverdream of a pizza parlor that serves a blend of Ohio/New York-style pizza by the slice (or pie) and “unpretentious classic cocktails.” With glowing neon signs, ’80s music videos, boldly patterned wallpapers, an entire wall of record covers and retro industrial décor, it’s a pulsing TGI Fridays reimagined to meet the needs of modern millennial diners. It’s fun, it’s weird and it’s attached to its sister bar — Oddfellows Liquor Bar — via an electric bathroom grotto. The Columbus-based operation offers options for vegetarians, vegans and gluten-free diners, plus drunk people as a nice nod to the “late night” in the name. Order one of the Sacraments, a list of outrageous pizza bastardizations, for a decadent experience. The Pizza Dawg is a butterflied hot dog stuffed with pepperoni and cheese and served with a pizza as the bun. The Cheezus Crust is a grilled cheese sandwich with pizza instead of bread. And if you’re feeling naughty but not that naughty, the Baby Cheezus is slightly less overwhelming in size but “every bit as blasphemalicious.” We’re calling it the best, but we can’t really think of any other grilled cheese pizzas... Mikey’s Late Night Slice, 2014 Elm St., Over-the-Rhine, latenightslice.com.

At the end of 2018, Covington favorite walk-up bagel window Lil’s Bagels abruptly closed. But after a long hiatus, the “Windough” reopened in April 2019 with a new concept. The menu had been expanded — with several kinds of non-bagel sandwiches and more spreads — and they introduced the Fam Club, a fee-based program in which members receive discounts on food and coffee and invites to special events. Some of those events included movie nights on the patio, all-you-can-eat latkes, pizza bagel Friday and LGBTQ nights. And in mid-February, after a fundraiser and much community support, Lil’s officially opened an indoor café. The restaurant offers a full deli, boozy brunch cocktails and seating for more than 20, plus a gold-framed TV screening throwback sitcoms or cartoons. “We truly see Lil’s as a community-owned space, and hope everyone uses it as an extension of their own dining room,” owner Julia Keister told CityBeat. Lil’s Bagels, 308 Greenup St., Covington, lilsbagels.com.