In 2022, Cincinnati celebrated several firsts — including the creation of a new pirate island — and long-standing local institutions — like BLINK and Kings Island — in truly spectacular fashion. These are the top Arts & Culture stories that affected Cincinnatians this year.
Scroll down to view images


There's a mystery surrounding an Oscar statuette that ended up in the donation box of the Be Concerned thrift shop in Northern Kentucky. At first, the nonprofit believed the statue just came from a gift shop, but further investigation revealed it was the real deal. The Academy Museum of Motion Pictures says the statuette was given out by Columbia Motion Pictures in 1935 after its film It Happened One Night starring Clark Gable swept the Academy Awards in its top five categories: Best Picture, Actor, Actress, Director and Screenplay. Be Concerned sold the statuette back to the museum, but the question remains: How did it end up in Cincinnati? Read CityBeat's story to learn more about the mysterious golden man.


You may have never heard of the People’s Republic of Chicken Island, but it exists right here in the Tri-State. The island was formed during the floods that happened in February and March of this year, current self-appointed Chicken Island Mayor Nick Motz and SS Tiki Tours boat captain and island friend Kevin Schmidt say. Right now, Chicken Island is a four-acre oval that measures 300 feet by 900 feet, and Motz and Schmidt are basically Ohio River pirates who have laid claim to it. But their rule on the island might not last: It could eventually be washed away or turned back into a peninsula. Read CityBeat's story to see the duo’s “plans” for the island.


A World War II-era ship that took part in the invasion of Omaha Beach on D-Day made a stop at the Public Landing at Sawyer Point in September and October. People were able to tour LST (Landing Ship, Tank) 325 and see where soldiers readied themselves for battle across a number of major military campaigns, including the Korean War and Vietnam conflicts. See more photos of the naval ship from CityBeat's Sean Peters.

Movies The Bikeriders and Wise Guys Begin Filming in Cincinnati; Bones and All premieres


Cincinnati continues to prove to be a hotspot for Hollywood. This year, celebrities Michael Shannon, Austin Butler and Norman Reedus were spotted around the Queen City as they filmed The Bikeriders, directed by Jeff Nichols. Taking inspiration from photographer Danny Lyon's 1967 book of the same name, the movie tells "an original story about a ’60s Midwestern motorcycle club as it evolves over the course of a decade from a community for outsiders into a far more sinister gang," according to an article from Variety magazine. The movie also stars Tom Hardy and Jodie Comer. Robert De Niro’s new film Wise Guys also began filming in the Tri-State this year. It tells the story of two Italian American crime bosses, Vito Genovese and Frank Costello, who run separate families in the middle of the 20th Century. Genovese attempts and fails to assassinate Costello in 1957. Costello is injured and attempts to quit the mob, according to IMDB.com. And the movie Bones and All, starring Timothée Chalamet and Taylor Russell in shots filmed in Cincinnati in 2021, made its debut at the Venice Film Festival in August. Read CityBeat's story to see where The Bikeriders stars were spotted while filming in Cincinnati. 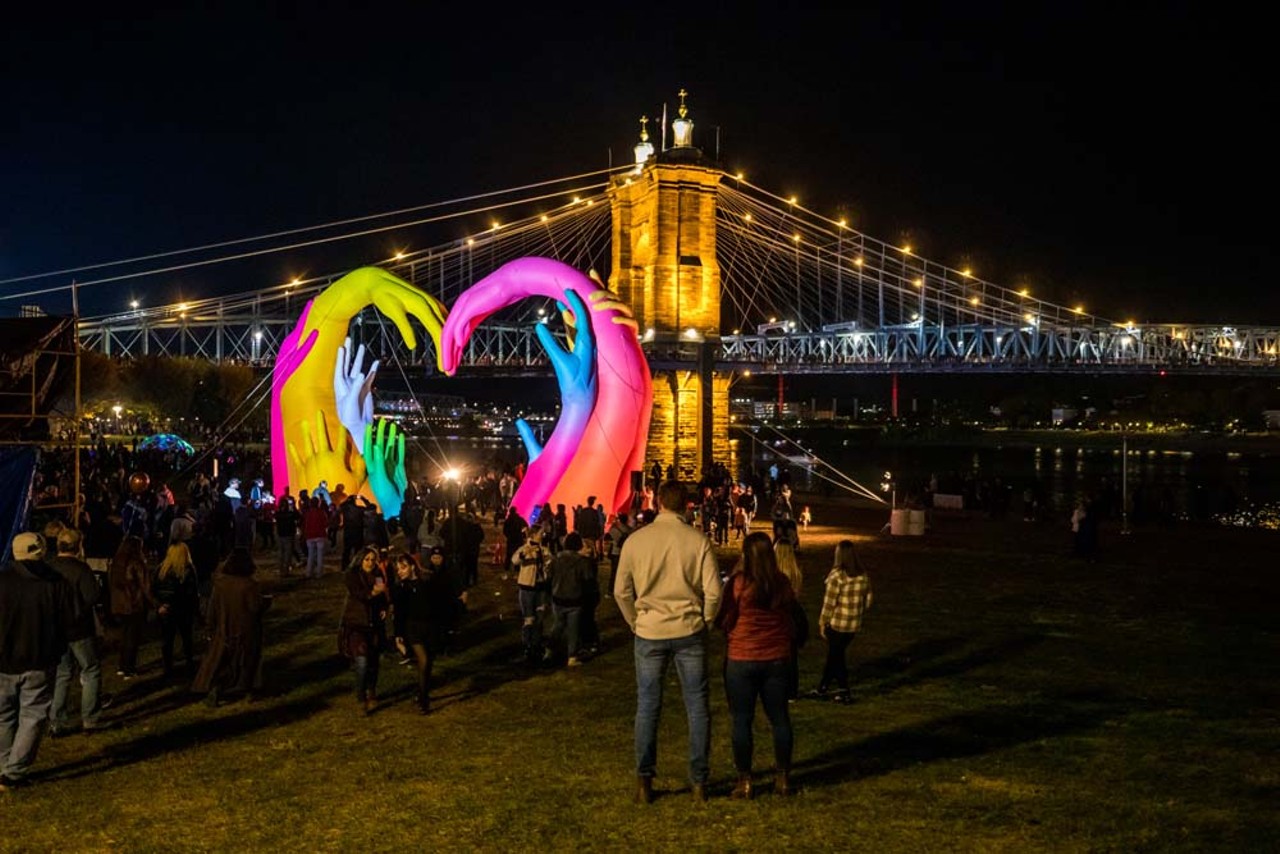 
In October, the BLINK festival converted 30 blocks of downtown Cincinnati, Over-the-Rhine and Covington into a lineup of literally and figuratively glowing visual, auditory and kinesthetic encounters. Touting itself as “the nation’s largest light, art and projection-mapping experience," the streets and structures of Greater Cincinnati were transformed by way of large-scale new murals, light installations, interactive sculptures, performance art, live entertainment and projection mapping (which casts computer-programmed light, color and animations across three-dimensional surfaces). While reviews of this year’s festival were mixed on social media, Star Wars star Mark Hamill had this to say about the appearance of Cincinnati’s own “Fluke Skywalker” in the parade: “To the guy who looks more like me than me: I truly admire your work for charity & for being in parades in Cincinnati on my behalf! Wishing you continued success, Mar.” Look at all the cool photos CityBeat took during BLINK 2022.


The beauty and mystery of Ancient Egypt descended upon Cincinnati's Krohn Conservatory in the spring — or at least its butterflies did. Cincinnati Parks (which oversees Krohn) described the floral exhibit as "specifically designed to show just how lush and inviting the gardens of ancient Egypt could be." Design elements were lifted from the art found in Egyptian tombs and temples and called to mind imagery like "orchards, palms and fish ponds with lotus plants." Hundreds of butterflies made the show even more magical. Everything CityBeat saw during the Butterflies of the Nile show. 
A brand new Barnes & Noble opened at Deerfield Towne Center in January, with local author Tonya Mitchell there to cut the ribbon and sign books. The staff of the Waterstone Center store, which closed in August of 2021, moved to work at the new location. In a press release, store manager John Walls said he and his team carry books specifically targeted toward the Mason community. “We are so happy to be back in the community with the opening of our new store. We missed our customers dearly, and are excited to reunite with them,” Walls said. Read CityBeat's story to learn more about the newest Barnes & Noble in the Tri-State.


Cincinnati’s beloved hippo Fiona became a big sister this year after her mother, Bibi, accidentally became pregnant while on birth control (whoops!) and gave birth to a healthy male calf on Aug. 3. The Cincinnati Zoo asked for naming suggestions from everyone before narrowing it down to Fritz or Ferguson. After holding a poll, the calf was named Fritz, which had received a narrow 56% of the votes. Read CityBeat's story about Hippo Cove’s newest bundle of joy.

Photo: provided by Earth to Kentucky


While an illustrated likeness of Colonel Harland David Sanders is how most people recall his visage, Covington’s indie toy shop Earth to Kentucky hoped to change that this year. Over 30 different artists from around the world captured the colonel’s likeness in Earth to Kentucky’s spring 2022 exhibit, The Colonel: A Group Art Show. Various designs reimagined Colonel Sanders as Guy Fieri and The Joker, and there are gold-plated and pinstriped Colonels along with Colonels dipped in acid — it’s all colorful, absurd and strangely appetizing. The fried chicken magnate made headlines again in June when the restaurant Colonel Sanders built for his wife Claudia, plus the home they lived in for over 25 years, went up for sale for an undisclosed amount. The estate sale also included hidden treasures and memorabilia from the Colonel, including a letter from former President Nixon to Sanders, Colonel Sanders’ original Kentucky Colonel certificate plus items like wristwatches and money clips. Read CityBeat's Q&A with Earth to Kentucky’s Dustin Benzing about the exhibit.


As new generations continue to rediscover Midcentury Modernism as a beloved art, architectural and design style, the following for Cincinnati-based Charley Harper seemingly is on an indefinite spike. Harper, who eventually landed in Cincinnati but was raised in West Virginia, created paintings, prints and illustrations that frequently stylized their nature-related subjects by deemphasizing depth and accentuating colorfulness and geometric characteristics, a common motif around the middle of the 20th century. He died in 2007 at age 84. In May, Wild Life: The Life and Work of Charley Harper was published by Brett Harper, son and only child of Harper and his artist wife Edie, Margaret Rhodes and publisher gestalten. Along with featuring a broad range of Harper’s work, it also includes a unique glimpse into the artist’s personal life and legacy. Later that summer, Harper’s legacy was celebrated again during a birthday celebration for the artist hosted by the Art Academy of Cincinnati on what would have been his 100th birthday. Read CityBeat's story on Harper’s 100th birthday celebration.