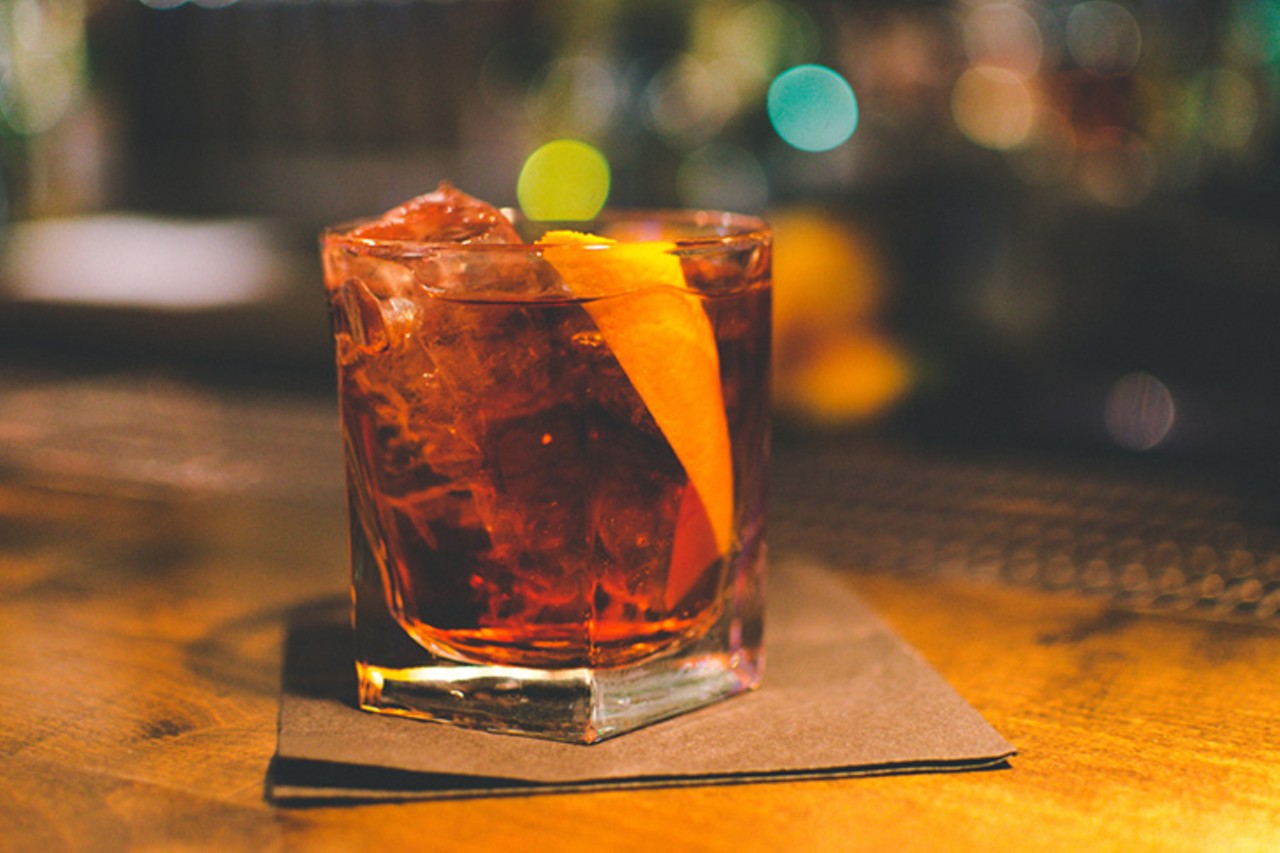 EVENT: Cincinnati Negroni Week
Feeling thirsty? Have a cocktail for a cause. The Negroni is an Italian cocktail made of one part gin, one part vermouth, one part Campari and garnished with an orange peel. Negroni Week is an initiative launched by liqueur manufacturer Campari and Imbibe Magazine in 2013 to, yes, celebrate the cocktail, but also raise funds for a variety of charitable causes. Negroni Week is now hosted in more than 10,000 bars, restaurants, etc. around the world and has raised more than $2 million. Cincinnati Negroni Week takes place through June 30 and participating venues will be offering special Negroni variations for charities of their choice. For example, Sotto will have six different Negroni and Negroni-inspired cocktails to benefit Slow Food International, Lonely Pine Steakhouse will be slinging a mezcal Negroni to benefit the Arbor Day Foundation, LOCOBA by Platform will have four different Negroni variations to benefit Lambda Legal and so on. To find venues participating in the rest of Negroni Week, visit negroniweek.com/venues and search “Cincinnati.”
Photo via Unsplash

COMEDY: Bang! Pow! Comics & Comics
It’s been quite a year for locally based comedian Tabari McCoy. “I was recently in Oklahoma and Kansas doing shows,” he says, “and I’m back home for a short stint before I hit the road to do shows in Little Rock.” Earlier this year he featured for both Tig Notaro and Jen Kirkman at the Taft Theatre. He also continues to host Bang! Pow! Comics & Comics, the comedy show held once a month at the Up, Up & Away comic book store in Blue Ash. “We might have some promo items and such that comic book and movie fans might like as an enticement to come out to the show,” he says. “And, of course, you’ll hear six good comics from throughout the Tri-State.” With all this success, it may be harder for McCoy to keep up his guise as the “black Charlie Brown” — at least one would think. “Oh, if only you knew. It’s actually getting much easier, sadly.” But at least he can laugh about it. 7-9 p.m. Thursday. Free but tipping is encouraged. Up, Up & Away Comics, 5885 Pfeiffer Road, Blue Ash, facebook.com/uuablueash.
Photo: TabariMcCoy.com

MUSIC: Esham
A pioneering figure in Detroit Hip Hop, Esham’s musical life began in the late 1980s, as he formulated a gritty, dark and aggressive style that laid the groundwork for Motor City big-timers from Eminem to Insane Clown Posse, while providing inspiration for countless others in the broader Hip Hop underground. With a switchblade-sharp delivery and viscerally violent and raw imagery in his lyrics, Esham is the self-proclaimed originator of Acid Rap and he was also an early influence on the Horrorcore genre. The MC began as a successful DIY artist (starting his Reel Life Productions label when he was just 15) and his career has taken him through label stints with the TVT-distributed imprint Overcore and ICP’s Psychopathic Records. Through it all, Esham has been unwaveringly prolific in terms of recorded output, featuring with other artists (including Kool Keith and ICP) and rarely going more than a couple of years between his own releases. Beginning with 1989’s Boomin’ Words from Hell, his solo discography includes more than 30 albums, EPs, mixtapes and compilations. Last year Esham released the full-length Dead of Winter and just a couple of months ago he dropped the single “Under Surveillance,” on which he growls, “They want me dead but I am not/I can’t rock ice, I’m too damn hot.” On his current Afraid of the Dark tour, Esham is performing with a live Hard Rock band. $12; $15 day of. Northside Yacht Club, 4227 Spring Grove Ave., Northside, northsideyachtclub.com.
Photo: Reel Life Productions

ART: Cincinnati Gateway Revisited at Weston Art Gallery
Discover the origin of Cincinnati’s famous flying pigs. Sculptor Andrew Leicester’s “Cincinnati Gateway” sculpture was created in 1988 as the entry adornment to Sawyer Point’s Bicentennial Commons. Controversial at the time of its unveiling, the flying pig statue is marking its 30th anniversary of inspiring a city’s identity. The Minneapolis-based Leicester has returned to the city to build a new installation at the gallery, with photo documentation of the Gateway project and others. On Sunday, art historian Erika Doss will give a lecture about Leicester’s and other artists’ approaches to “public art and public space.” Opening reception 6-8 p.m. Friday. Through Aug. 25. Free admission. Weston Art Gallery, 650 Walnut St., Downtown, cincinnatiarts.org.
Photo: Photo courtesy of the artist and the Weston Art Gallery

EVENT: Urban Artifact Pickle Eating Contest
Urban Artifact is celebrating the release of its deliciously briny Pickle Gose, a dill pickle brew wherein every 30-barrel batch is made with 1,000 pounds of cucumbers, nine pounds of sea salt, two pounds of fresh dill and 567 grams of coriander. And yes, it tastes like pickles. Brews went on sale in six pack cans on June 25, but the brewery is marking the occasion with a now-annual pickle-eating contest. Starting at 1 p.m. on Saturday, up to 40 contestants will be competing to see who has the stomach and the sodium tolerance to take down the most pickles in one sitting. Each contestant will have five minutes to eat as many pickles as possible. Competitors will be divided into heats. The winner will be awarded a pickle trophy and Urban Artifact gift card. Go Go Buffalo’s Jeremy Moore will emcee. In addition to the contest, pickle fans can partake in fermented goods from the Pickled Pig, Fab Ferments and Skinny Piggy kombucha or a pickle pizza from the in-house WildFire Pizza Kitchen. If you feel like kicking it up a notch, four pack cans of a special Epicurean Spicy Pickle gose will be available, infused with peppers. A true dream for all pickle lovers and a true nightmare for those who abhor these vinegary vixens. Noon-4 p.m. Saturday. Free admission. Urban Artifact, 1660 Blue Rock St., Northside, facebook.com/urbanartifactbrewing.
Photo: Brittany Thornton