The future of Greater Cincinnati music is in good hands: School of Rock Mason showcases at Bogart’s to raise money for a great cause 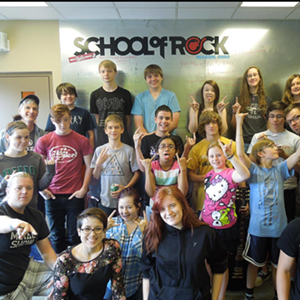 Photo: Mason.Schoolofrock.com
Some of the students from School of Rock Mason.
Every now and then on social media, you’ll come across a snarky rant or serious concern about the future of Rock & Roll. Likewise, some have fears about things like live music, music education and whether the generations growing up in the digital age will even have interest in picking up a musical instrument and pursuing music in any genre that still relies on them.

If you have such anxieties — or even if you don’t and you just want to have a reassuring and heart-warming musical experience — you need to get out and catch one of the many showcases featuring the students from the School of Rock in Mason, Ohio. The education center — which features experienced instructors (many noted local musicians from well-known Cincinnati-area bands) who cover instrumental skills, as well as things like live performance — presents SoR shows throughout the year, themed around what bands, era or artists or genre the students’ classes pursue. The young musicians — who range in age from 10-18 — perform regularly at School of Rock Mason’s Sonic Boom Room, while also venturing out to music venues around the area, like Northside Tavern and Woodward Theater. Check the SoR Mason's Facebook page for shows and updates.

Click here for more on School of Rock Mason’s programs.

Friday night, several current and past students from School of Rock Mason present a showcase that will cover a range of syllabuses, and raise funds for a great cause. Some proceeds from 8 p.m. show at Bogart’s in Corryville (bogarts.com) will go to CancerFree KIDS, a local non-profit organization. SoR’s 15-piece house band will anchor the night, which will feature more than 65 students throughout the show. The musicians will cover music from recent showcases, including a Guns N’ Roses tribute, a celebration of Yacht Rock and a classic Soul revue.

Opening the show are The Bassless Chaps and Freak Mythology, two groups formed by musicians who learned their chops at School of Rock Mason and have been building buzz on the local music circuit.

Here’s a clip of the SoR students (posted by a proud parent) performing a song by the Punk band Death from the “Off the Dial” showcase at Northside Tavern recently. The show’s setlist also included tunes by Fugazi, Sleater-Kinney and X-Ray Spex, as well as songs by Cincinnati Indie Rock greats like Tweens.

And here is a band of students closing out last year’s Cincinnati Entertainment Awards ceremony in style with some Talking Heads.