The prosecutor's office is one of the last Republican strongholds in a county that used to be mostly red. But it won't be easy to beat Republican incumbent Joe Deters, who has strong support and a big campaign fund. 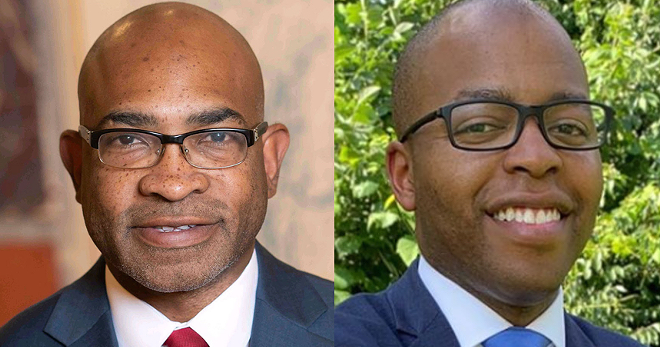 The contest within the Democratic Party over who will take on Hamilton County Prosecutor Joe Deters this November has been a relatively quiet one, but it could prove pivotal.

The prosecutor's office is one of the last Republican strongholds in a county that used to be mostly red, and Democrats have salivated over the prospect of knocking Deters from that perch. But that won't be easy — Deters has strong support and a big campaign fund on his side.

The Hamilton County Democratic Party has endorsed former judge Fanon Rucker in the race. But to get the chance to take on Deters, Rucker will need to come out on top in the March primary against fellow Democrat and former federal prosecutor Gabe Davis, who announced his campaign back in July.

Rucker was appointed to the county's municipal court in 2007 by then-Ohio Gov. Ted Strickland. He announced he was stepping down from that role in August last year. Before his time as a municipal judge, he was a private attorney focused on civil rights and labor law and an assistant prosecutor for the City of Cincinnati.

“On day one, we will enact policies that will focus on aggressive prosecution of violent crimes, provide continued support of victims after the court process, staff an office with those focused on the foundational principles of justice and reduce overcrowding in our jails and prisons,” Rucker said in a statement about his candidacy pledging to "bring a renewed sense of fairness to the prosecutor's office."

Should he win in the primary, this wouldn't be Rucker's first race against Deters: The two battled it out for the prosecutor's office in 2004.

Davis, who graduated from Harvard Law School, served as an assistant district attorney in Manhattan and in the Department of Justice's Civil Rights division under President Barack Obama. Currently, Davis is an attorney with Frost Brown Todd downtown.

Deters officially launched his reelection campaign May 30 last year with a fundraiser that drew big-name local Republicans and raised roughly $500,000.

Despite his popularity, Deters has at times drawn ire from Democrats in a county that is growing more and more blue.

Davis says that reforms are necessary around racial and economic disparities in the county justice system and has blasted Deters for refusing to make some of those reforms on issues like cash bail.

Some Democrats, including Cincinnati City Councilmember P.G. Sittenfeld, have called for an end to cash bail at the county level for those suspected of most nonviolent crimes. Deters, however, says that's unnecessary. Davis penned an op-ed in The Cincinnati Enquirer challenging that assertion shortly before announcing his primary campaign.

"When we see an injustice, we don't stand idly by — we do something," Davis wrote in a series of tweets. "Our current Prosecutor claims that Hamilton County doesn't need judicial reform. He claims things are fine just the way they are. Not only that, but like our current President, he also makes wild statements and is insensitive to the injustices occurring under his watch. With my experience as an attorney, my commitment to justice, and my pride in calling Hamilton County home, I have to say: The time for a new Prosecutor is now."