The 36-page anthology features tales of the mermaids of the Ohio River, Loveland Castle, the Loveland Frogman, Cincinnati Music Hall, Satan’s Hallow and the Sedamsville Rectory. 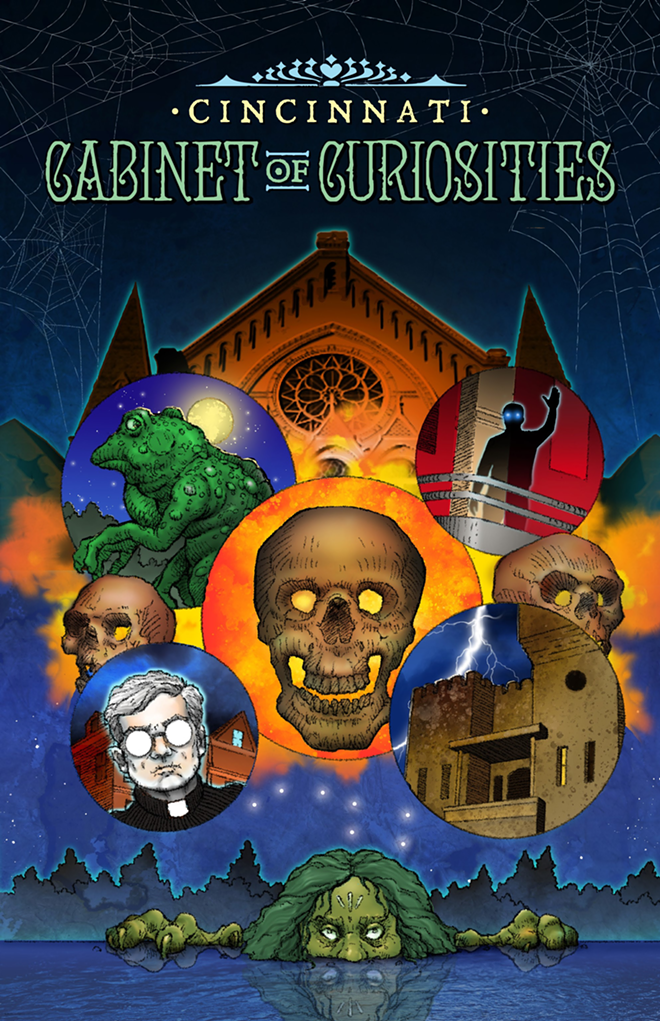 The stories were selected by project editor Kat Klockow — a proclaimed "haunted history author and legend tripper" — and illustrated and interpreted by six different local comic artists based on which “stories struck them the most,” Klockow says.

"When coming up with the location list I tried to strike a balance between creepy monsters, urban legends, and ghost stories," Klockow says.

The 36-page anthology features tales of the mermaids of the Ohio River, Loveland Castle, the Loveland Frogman, Cincinnati Music Hall, Satan’s Hallow and the Sedamsville Rectory.

Photo: Provided by Cabinet of Curiosities

Klockow and project manager and illustrator Christina Wald have launched a Kickstarter for the book as well as their own publishing company, Corpse Flower Press. They aim to raise $6,000 (and are already more than $4,300 to their goal). Those funds will be used to print and distribute physical copies of Cabinet of Curiosities, as well as pay the anthology’s artists and writers. After the Kickstater is complete, you can purchase copies directly from Corpse Flower Press or the artists themselves.

We emailed with Wald and Klockow to learn more about this ghoulish graphic novel, the process and their plans for the future.

CityBeat: Coming out with a spooky comic anthology right around Halloween seems like a perfect idea. Can you tell me what inspired you guys to create Cabinet of Curiosities?

Christina Wald: We wanted to do a comic project together that showcased Cincinnati artists. We felt it needed to have a unifying theme to generate reader interest.

Kat Klockow: All the artists who are featured in this book used to routinely attend monthly comic illustrator gatherings and we had the idea at one of these meetings. We all enjoy various levels of horror and supernatural media, and thought this was a great way to celebrate Cincinnati’s weird history.

CB: Was there a haunted tale up for debate that you didn't include or wish you had included?

CW: No. Some of the locations will be in book two and they are really cool!

KK: Looking back, I wish we could have included a tale from Northern Kentucky in this issue. What springs to mind first is Bobby Mackey’s Music World, but that has been done to death (excuse the pun). Maybe a ghost story or urban legend such as Alexandria’s Witch Hill, the ghosts of the Maysville Opera House, or one of the famously haunted historic houses in Covington — with the owner’s permission, of course.

We debated to include UFO sightings in the Tri-State on and off throughout the process, but ultimately decided to focus on the more ghostly and ghoulish side of the topic of the unexplained.

CB: How did you research the info to include in each tale? Who wrote the panels?

KK: That was a partnership between Christina and I. Personally I have an extensive collection and knowledge of local folklore in the region and Christina did the footwork to photograph and film each location. For each topic, a location dossier was written up for the creator and included links for further information. Then the writer or creator (some worked in teams and others, like myself, worked alone) would write the script, lay out the panels, and do the illustration work. As editor, I did approve the scripts and layouts to make sure they were staying close to the legends.

CB: Can you tell me which local illustrators participated?

KK: Many of the region’s best illustrators and writers eagerly volunteered to participate in this project, and they all did a fantastic job. Our cover was done by Thomas Miller, a wonderful science fiction and fantasy illustrator. Meanwhile, our first story, “Mermaids of the Ohio River,” was written by Jay Kalagayan and illustrated by Dylan Speeg, who are the team behind the MeSseD comic series. Brandon Wagner is a Cincinnati native illustrator who contributed the story “Music Hall Horror.” Our art director, Tim Fuller, did “Froggy Went a Courtn’;” he also is the creator of Sham Comics for Source Point Press. Christina Wald, our project manager and great children’s book illustrator, retold the urban legend of Satan’s Hallow in Blue Ash with a humorous twist. Rodney Fyke, who grew up in the area, worked on the Loveland Castle piece because of how much of a personal attachment he has to the location. Finally, I contributed the Sedamsville Rectory piece based on events during a paranormal investigation I did there a few years ago.

What I love about this anthology is how everyone interpreted the stories and told it in their own voices. We all have different illustration and design backgrounds, but by keeping on the topic of the paranormal we could work together

CB: This says it will be the first in the anthology. What's next?

CW: We want to stick to the “paranormal” theme. We plan to have a new issue each October. We also started (a) podcast.

KK: There is a lot of heart in this project so we are pretty optimistic that this anthology series can continue to produce new issues every year highlighting local ghost stories and creepy creatures for readers to enjoy.

CB: You said you guys also host a podcast about the paranormal and hometown haunts. When does that air? And where? Frequency? What do you all cover in that?

KK: This has been a fun side project which grew out of this comics anthology project! Currently, you can listen to Christina, Jen (Koehler) and I discuss Tri-State region legends and ghost stories every Wednesday on YouTube. So far, we have shared and discussed our own hometown haunts — which aren’t necessarily local to here. I am from Mishawaka, Indiana and Jen is from St. Louis, Missouri. We also read listener-submitted hometown haunts from around the United States (and hopefully beyond.)

CW: It posts every Wednesday at Midnight. We record on Mondays. We pick a few locations each week and have interviews.

CB: What was your favorite part about this process?

CW: Sketching out the story, illustrating it and making the videos. It was all too much fun.

KK: For me, it is the “legend tripping” — the process of researching the location and visiting it (with permission) to see it in person and just bask in the weird history of the place. This passion for legend tripping led me to write my first two books about haunted history and now to be able to share this thrill with a bunch of close friends has been a treat. I can’t wait to do it again next year.

CB: What do you hope readers will feel or take away from the book?

CW: A sense of the rich lore Cincinnati has to offer.

KK: Ghost stories and urban legends have a strange way of preserving local history and have it speak to modern audiences in an impactful way. What I am hoping is that our readers will not only be entertained but also get that spark of exploration and curiosity to seek out more weird history (that) Cincinnati and the region has to offer.

Donate to Cabinet of Curiosities' Kickstart at kickstarter.com to get a digital or print issue of the anthology. And learn more at facebook.com/cincycabinetofcuriosities.