With Halloween coming up Friday, we’ve got lots of costumes to look forward to/dread: over-the-top celebrity ensembles, clever pop culture costumes, folks who didn’t get the memo that Halloween is not an excuse to be racist. But we get an awesome early costume from Paralympian Josh Sundquist. The athlete lost his left leg as a child and couldn’t be any better of a sport about it, as evidenced by his creative costumes year after year. This time around, he’s a foosball player. 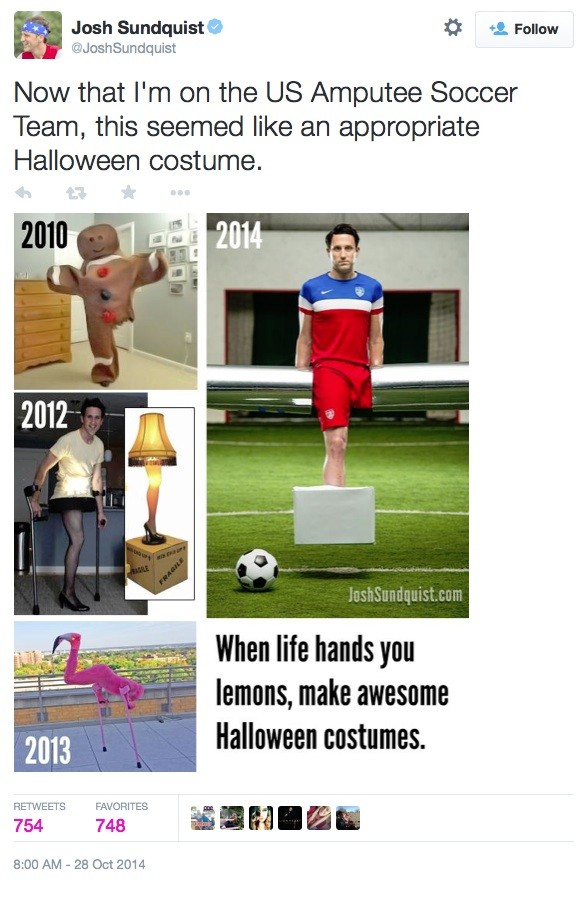 LeVar Burton has read countless books to children during his time on Reading Rainbow. But now, Burton just wants kids to Go the Fuck to Sleep.

Let’s talk about last week’s SNL. Jim Carrey hosted for the third time, this one in advance of the upcoming Dumb and Dumber sequel (so help us, god). If you’re wondering why the comedian never starred on the sketch comedy show, instead getting his big break on In Living Color, he tried — read more about his failed auditions here.

While the episode had its low points — more on musical guest Iggy Azalea later — Jim Carrey served up classic Jim Carrey insanity with plenty of physical humor, face-morphing impressions and even a walk down memory lane with his characters from the past 25 years. Best of all was his take on the weird Matthew McConaughey Lincoln ads.

Then there was Iggy Azalea. The musical guests so far this season have all catered toward a mostly younger audience, but that’s typically the case. And whether you’re sick of her faux Atlanta rap-cent or you still have “Fancy” as your ringtone, Iggy has churned out hit after hit over the past year and she should have been able to produce at least a mildly entertaining performance. But she did not. Both performances flat-lined, plagued with bad lip synching to less-than-stellar pre-recorded tracks, awkward quasi-dancing (you don’t have to have choreography just because you’re a girl, you know) and featured artists with whom she had zero chemistry. And I know following every episode of SNL someone writes a “Was this the worst performance in SNL history?” commentary, but you really have to watch the uncomfortable, dead-eyed performances for yourself.

It seemed more like a skit making fun of white girl rappers than anything. But it stands as a reminder that ass alone does not a rapper make.

Pardon my Seinfeldism, but what is the deal with kids on competition shows? First there was MasterChef Junior, where kids who have been cooking since they were in diapers compete to impress Gordon Ramsay and other chefs. Now there’s Project Runway: Threads with little Tim Gunns that know their way around a sewing machine better I can ever dream (hot glue is my savior). Do you want me to feel inferior to 9-year-olds?

Apparently you can permanently alter the color of your eyes if you hate yourself just enough!

Marcel the Shell is back! Jenny Slate and Dean Fleischer-Camp’s lovable personified shell returns for the first time since 2011 with a new video and a book, Marcel the Shell: The Most Surprised I've Ever Been. Marcel the Shell with Shoes On went viral in 2010 but the short film actually has critical accolades, too: It was awarded Best Animated Short at AFI FEST 2010, was an official selection of the 2011 Sundance Film Festival and won the Grand Jury and Audience Awards at the New York International Children's Film Festival. (You know, just in case you needed any further proof that Jenny Slate is the best.)

And speaking of new installments of viral videos, there’s a new Between Two Ferns with — as Zach Galifianikis calls him — Bradley Pitts.

New movie trailers to hit the Interwebz: Paddington Bear, a character made popular through children’s books since 1958, gets the live-action treatment in Paddington; A troubled young man finds the will to live when his young but more mature niece is put in his care in Before I Disappear; and Brooklyn Nine-Nine’s Chelsea Peretti has a stand-up special coming to Netflix next month, One of the Greats.