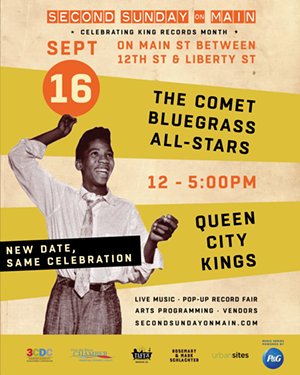 On the second Sunday of September 2018, you almost needed a small boat to get around Over-the-Rhine due to the heavy and persistent rains. OK, it wasn't that bad, but it definitely wasn't "outdoor community street festival" weather, so organizers of the Second Sunday on Main fest — on Main Street (between Liberty and 12th streets) in OTR — decided to cancel it's Sept. 9 event.

But today (Sunday, Sept. 16), Second Sunday on Main has been rescheduled, offering a rare "Third Sunday on Main" edition. The King Records-themed event (smack dab in the middle of King Records Month) kicks off at noon and will feature the same fun and festivities.

For more info, see CityBeat's initial preview of the event below: