Ohio Secretary of State Jon Husted has revoked the registrations of an unspecified number of residents because they didn’t respond to address verification requests or hadn’t voted in four years. 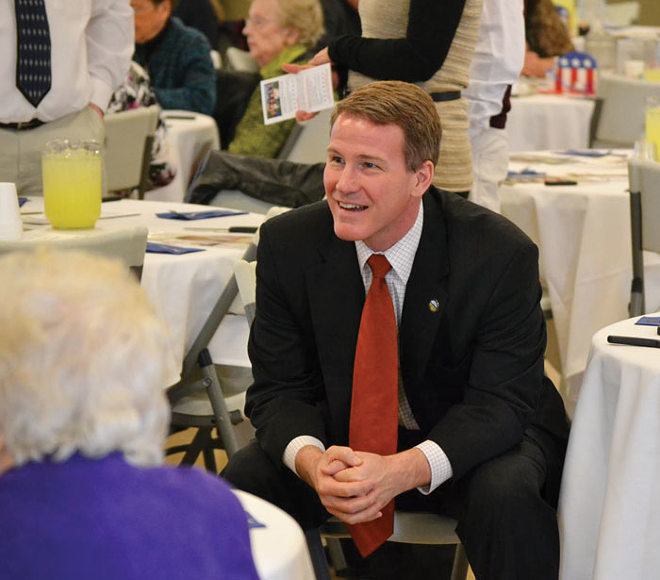 Photo: Provided
Ohio Secretary of State Jon Husted meeting some voters that he didn’t purge from the Ohio registration rolls.

The groups trying to undo the state’s purge of tens of thousands of Ohioans from voter rolls because of failing to vote or confirm home addresses have a powerful new ally in their court fight — the U.S. Justice Department.

The legal battle erupted in April when the Ohio A. Philip Randolph Institute and the Northeast Ohio Coalition for the Homeless filed suit in federal court in Columbus. It challenged Ohio Secretary of State Jon Husted’s move to revoke the registrations of an unspecified number of residents because they didn’t respond to address verification requests or hadn’t voted in four years.

U.S. District Judge George Smith upheld Husted’s actions on June 29. The plaintiffs, who are represented by the American Civil Liberties Union of Ohio and the public policy group Demos, appealed to the Sixth U.S. Circuit Court of Appeals in Cincinnati.

The U.S. Justice Department joined the fray on Monday. In a 64-page pleading, it says Ohio’s purging of voters for inactivity violates both the National Voter Registration Act of 1993 and the Help America Vote Act of 2002. It asks the appellate court to reverse Smith’s decision.

“Ohio assumes that voters who have not cast a ballot in two years have moved and then sends these voters a confirmation notice to verify a change of address,” states the government’s friend-of-the-court brief. “If the voter does not receive or does not respond to the notice, and then does not vote in the following two federal elections, she is removed from the voter rolls. This practice violates the NVRA and HAVA because it triggers the removal process without reliable evidence that a voter has moved.”

The total number of Ohioans removed from voter rolls because of inactivity has not been tallied but is nonetheless believed to be significant. Last month Reuters estimated that at least 144,000 voters were purged for that reason in the state’s three most populated counties — Cuyahoga, Franklin and Hamilton counties. The Hamilton County Board of Elections, said 14,022 voters were removed in 2015 for not showing any activity in the past four years, including voting, verifying addresses and signing petitions. It purged 13,496 voters in 2014, 16,148 in 2013.

“The fact that the federal government has come forward and said that people may be disenfranchised by this process is a very powerful statement,” Brickner says. “They (Ohio) are doing purges yearly now, so if the lawsuit is not successful, there will be additional purges this year.”

Husted, in a new court filing of his own Thursday, was not fazed by the Justice Department’s interest in the case.

“The department’s position is entitled to no weight because the department is not tasked with interpreting the (National Voter Registration) Act,” Husted says in a 75-page appellate brief that defends his office’s position on voter purges.

Demos, the New York-based advocacy group representing the plaintiffs in the suit against Husted, says many Ohio voters didn’t even know that they had been deregistered.

“Some of these purged voters learned for the first time that they were no longer registered when they went to vote in the November 2015 general election, another election that, due to several significant statewide and local races, drew many infrequent voters,” wrote Stuart Naifeh, Demos’ senior counsel, in a summary of the lawsuit.

Ohio State Rep. Denise Driehaus, D-Clifton, says she wasn’t surprised that the Justice Department got involved in the lawsuit against Husted.

“When you deny people the right to vote, everybody should be getting involved,” Driehaus says.

When people register to move and don’t move, Driehaus adds, they shouldn’t have to fill out address-confirmation notices that are unfamiliar to them.

“When people go to vote in November, and their name isn’t on the registration tablet, that’s going to create some problems at the polling places,” she says. “They’re going to have some pretty frustrated people on their hands.”

This is far from the first time fights have popped up over voting rights in Ohio. Last year, voter access advocates like the Ohio Organizing Collaborative sued the state over Republican-led laws that called for rollbacks of the state’s so-called “Golden Week,” a period before the election when voters could register and cast early ballots on the same day.

That fight came as the state legislature mulled laws that would require voters to present photo IDs when voting. Both measures, voting rights activists said, would curtail voting opportunities for low-income and minority residents who tend to vote Democratic.

Earlier this year, a federal judge blocked the state law eliminating Golden Week, saying it violates the Constitution and the Voting Rights Act. The ruling brought an end to a pitched, multi-year battle over attempts to roll back early voting here. Previous to that ruling, the state settled a similar lawsuit with the American Civil Liberties Union, which claimed Ohio’s early voting rollback would have disproportionately disadvantaged black voters.

The battle over voting in Ohio has big implications. More early voting days and the return of same-day registration and voting mean more Democratic voters in one of the nation’s most vital swing states.

Both parties have zeroed in on Ohio as a must-win in the 2016 presidential election, and a battle is also raging over the seat currently held by U.S. Sen. Rob Portman, who comes up for re-election this year.

Democrats are keen to win Portman’s seat as they seek to take control of the Senate again.

With the presidential election less than four months away, efforts to protect voters’ rights have taken on greater urgency. The Brennan Center for Justice, a nonpartisan policy and law center at New York University, says that 17 states adopted new voting restrictions in 2016. Some require photo identification cards. Others, including Ohio, cut back on early voting. Because the measures have most impact on low-income and urban voters, it is argued that they are hostile to Democratic rather than Republican voters.

*This article is an extension of a story originally published on July 21.