If you're looking for something new to read, or missed one of these favorites, here's what to borrow (or download) next. 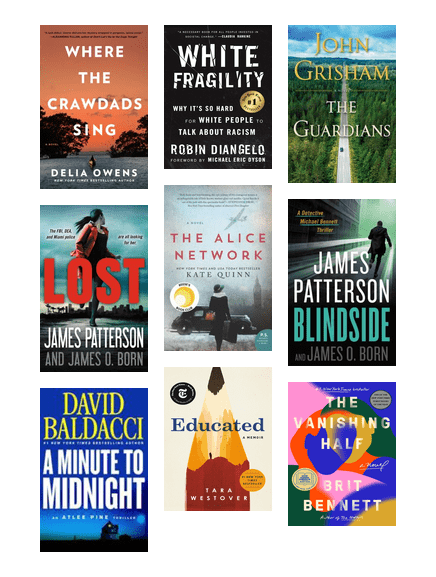 The Cincinnati Public Library has put together a list of the top 10 most checked-out books by adults in 2020.

So if you're looking for something new to read, or missed one of these hits, here's what to borrow (or download) next:

Where the Crawdads Sing

This debut by author Delia Owens is described as such on the book jacket:

"For years, rumors of the 'Marsh Girl' have haunted Barkley Cove, a quiet town on the North Carolina coast. She's barefoot and wild; unfit for polite society. So in late 1969, when handsome Chase Andrews is found dead, the locals immediately suspect Kya Clark. But Kya is not what they say. Abandoned at age ten, she has survived on her own in the marsh that she calls home. A born naturalist, she takes life lessons from the land. Drawn to two young men from town, who are each intrigued by her wild beauty, Kya opens herself to a new and startling world--until the unthinkable happens."

White Fragility: Why It's So Hard for White People to Talk About Racism

This is some necessary reading. Here's the description from the library page:

"The New York Times best-selling book exploring the counterproductive reactions white people have when their assumptions about race are challenged, and how these reactions maintain racial inequality. In this 'vital, necessary, and beautiful book' (Michael Eric Dyson), antiracist educator Robin DiAngelo deftly illuminates the phenomenon of white fragility and 'allows us to understand racism as a practice not restricted to 'bad people'' (Claudia Rankine). Referring to the defensive moves that white people make when challenged racially, white fragility is characterized by emotions such as anger, fear, and guilt, and by behaviors including argumentation and silence. These behaviors, in turn, function to reinstate white racial equilibrium and prevent any meaningful cross-racial dialogue. In this in-depth exploration, DiAngelo examines how white fragility develops, how it protects racial inequality, and what we can do to engage more constructively."

"In a small Florida town, a young lawyer, Keith Russo, is shot to death as he works late. A young black man, a former client, named Quincy Miller is charged and convicted. For 22 years, Miller maintains his innocence from inside prison. Finally, Guardian Ministries takes on Miller's case, but Cullen Post, the Episcopal minister in charge, gets more than he bargained for. Powerful people murdered Russo — they do not want Miller exonerated, and will kill again without a second thought (adapted from info provided and jacket info)."

Another thriller, this time by James Patterson and James O. Born.

"Detective Tom Moon and his multi-talented team face off against an international crime ring looking to seize control of America's most vibrant city, Miami. The city of Miami is Detective Tom Moon's back yard. He's always kept it local, attending University of Miami on a football scholarship, and, as a Miami PD officer, protecting the city's most vulnerable. Now, as the new leader of an FBI task force called 'Operation Guardian,' it's his mission to combat international crime. Moon's investigative team discovers that the opportunistic 'Blood Brothers' — Russian nationals Roman and Emile Rostoff — have evaded authorities while building a vast, powerful, and deadly crime syndicate throughout Europe and metropolitan Miami. Moon played offense for UM, but he's on the other side of the field this time. And as the Rostoffs zero in on a target dear to Tom, they're not playing by anyone's rules."

A historical novel by Kate Quinn.

"In an enthralling new historical novel from national bestselling author Kate Quinn, two women — a female spy recruited to the real-life Alice Network in France during World War I and an unconventional American socialite searching for her cousin in 1947 — are brought together in a mesmerizing story of courage and redemption. 1947. In the chaotic aftermath of World War II, American college girl Charlie St. Clair is pregnant, unmarried, and on the verge of being thrown out of her very proper family. She's also nursing a desperate hope that her beloved cousin Rose, who disappeared in Nazi-occupied France during the war, might still be alive. So when Charlie's parents banish her to Europe to have her little problem taken care of, Charlie breaks free and heads to London, determined to find out what happened to the cousin she loves like a sister.

1915. A year into the Great War, Eve Gardiner burns to join the fight against the Germans and unexpectedly gets her chance when she's recruited to work as a spy. Sent into enemy-occupied France, she's trained by the mesmerizing Lili, the 'Queen of Spies,' who manages a vast network of secret agents right under the enemy's nose. Thirty years later, haunted by the betrayal that ultimately tore apart the Alice Network, Eve spends her days drunk and secluded in her crumbling London house. Until a young American barges in uttering a name Eve hasn't heard in decades, and launches them both on a mission to find the truth ... no matter where it leads."

"The mayor of New York has a daughter who's missing and in danger. Detective Michael Bennett has a son who's in prison. The two strike a deal."

A Minute to Midnight

"'My sister was abducted from here nearly thirty years ago. The person who took her was never found. And neither was she. Her abductor nearly killed me. So I'm back here now trying to find the truth.' Atlee Pine has spent most of her life trying to find out what happened that fateful night in Andersonville, Georgia. Her six-year-old twin sister, Mercy, was taken and Atlee was left for dead while their parents were apparently partying downstairs. One person who continues to haunt her is notorious serial killer, Daniel James Tor, confined to a Colorado maximum security prison. Does he really know what happened to Mercy? The family moved away. The parents divorced. And Atlee chose a career with the FBI dedicating her life to catching those who hurt others. When she oversteps the mark on the arrest of a dangerous criminal, she's given a leave of absence offering the perfect opportunity to return to where it all began, and find some answers. But the trip to Andersonville turns into a roller-coaster ride of murder, long-buried secrets and lies. And a revelation so personal that everything she once believed to be true is fast turning to dust."

This memoir from Tara Westover has had a ton of acclaim — a No. 1 best seller on the New York Times, Boston Globe and Wall Street Journal lists, plus it landed on Bill Gates' and President Barack Obama's favorite books lists.

"Born to survivalists in the mountains of Idaho, Tara Westover was seventeen the first time she set foot in a classroom. Her family was so isolated from mainstream society that there was no one to ensure the children received an education, and no one to intervene when one of Tara’s older brothers became violent. When another brother got himself into college, Tara decided to try a new kind of life. Her quest for knowledge transformed her, taking her over oceans and across continents, to Harvard and to Cambridge University. Only then would she wonder if she’d traveled too far, if there was still a way home."

"The Vignes twin sisters will always be identical. But after growing up together in a small, Southern Black community and running away at age sixteen, it's not just the shape of their daily lives that is different as adults, it's everything: their families, their communities, their racial identities. Many years later, one sister lives with her black daughter in the same southern town she once tried to escape. The other secretly passes for white, and her white husband knows nothing of her past. Still, even separated by so many miles and just as many lies, the fates of the twins remain intertwined. What will happen to the next generation, when their own daughters' storylines intersect?

Weaving together multiple strands and generations of this family, from the Deep South to California, from the 1950s to the 1990s, Brit Bennett produces a story that is at once a riveting, emotional family story and a brilliant exploration of the American history of passing. Looking well beyond issues of race, The Vanishing Half considers the lasting influence of the past as it shapes a person's decisions, desires, and expectations, and explores some of the multiple reasons and realms in which people sometimes feel pulled to live as something other than their origins."

Just Mercy: A Story of Justice and Redemption

This New York Times best seller is now a film starring Michael B. Jordan and Jamie Foxx. It has won multiple awards, including the Carnegie Medal for Excellence in Nonfiction and NAACP Image Award for Nonfiction.

"Bryan Stevenson was a young lawyer when he founded the Equal Justice Initiative, a legal practice dedicated to defending those most desperate and in need: the poor, the wrongly condemned, and women and children trapped in the farthest reaches of our criminal justice system. One of his first cases was that of Walter McMillian, a young man who was sentenced to die for a notorious murder he insisted he didn't commit. The case drew Bryan into a tangle of conspiracy, political machination, and legal brinksmanship — and transformed his understanding of mercy and justice forever.

Just Mercy is at once an unforgettable account of an idealistic, gifted young lawyer's coming of age, a moving window into the lives of those he has defended, and an inspiring argument for compassion in the pursuit of true justice."