Thousands in the Dayton area are still without power and water in the aftermath of the storms. Cincinnatians can take donations for those recovering from the tornadoes to local breweries 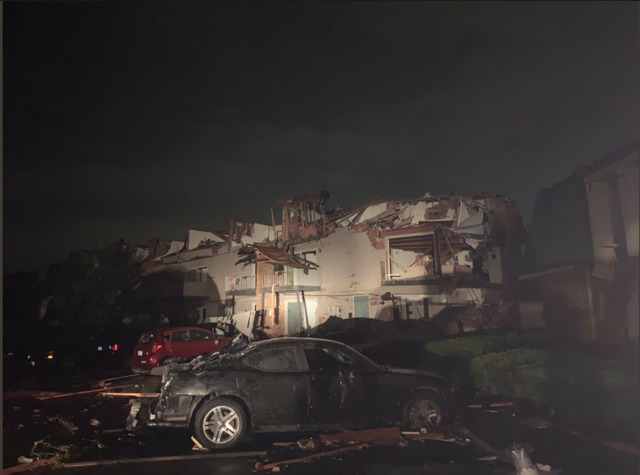 The catastrophic storms that tore through Indiana and Ohio May 27 produced 11 tornadoes in the Buckeye State, the National Weather Service says, killing one person and injuring dozens.

Emergency crews and volunteers are busy picking up the wreckage from those storms as other aid efforts take shape, including some in Cincinnati.

The American Red Cross has established nine emergency shelters across those counties — as well as Miami County — for those forced out of their homes by the storms.

Many of the twisters that hit Ohio were incredibly powerful.

A system called the Fujita Scale categorizes tornadoes by wind speed. According to the National Oceanic and Atmospheric Administration and National Weather Service, an EF0 tornado is the least intense, with winds up to 73 miles per hour. The strongest storms to hit Ohio were in the EF3 category — meaning they had wind speeds between158-206 miles per hour.

An EF3 struck Celina Monday night, destroying 40 houses and killing 82-year-old Melvin Dale Hanna when it flung a car into his house.

Two other EF3s touched down in the Dayton area, hitting Beavercreek and Trotwood. Two more tornadoes — an EF2 and an EF0 — also hit parts of the county.

The National Weather Service says the record for the most tornadoes produced by a local storm system is 12.

In the aftermath of the storms, almost 35,000 customers served by Dayton Power and Light are still without power — down sharply from the 65,000 immediately after the tornadoes struck.

At a news conference today, Dayton officials told residents there to continue boiling their water as the city works to get its water systems back online. Those facilities lost power due to the storm. About 60,000 people are without water currently, though a number of households could see their water restored soon as crews work to build pressure back up in the water system.

A number of local breweries are collecting clothing, food and water for those living in Dayton.

Grainworks Brewing Co., March First Brewing, Rhinegeist Brewery, Streetside Brewery and Taft's Brewpourium are all collecting clothing, food and water donations. Rhinegeist is accepting those donations until Sunday evening for Monday delivery; other breweries will deliver the donations they get Friday night.

The Cincinnati and Dayton American Red Cross, Duke Energy and Channel 5 are also holding a telethon until 6:30 p.m. tonight. You can call 513-412-5095 to make a pledge.