Citing potential economic development, Mayor John Cranley touted a soccer stadium in the West End and said turning it down would be a "tragic mistake" 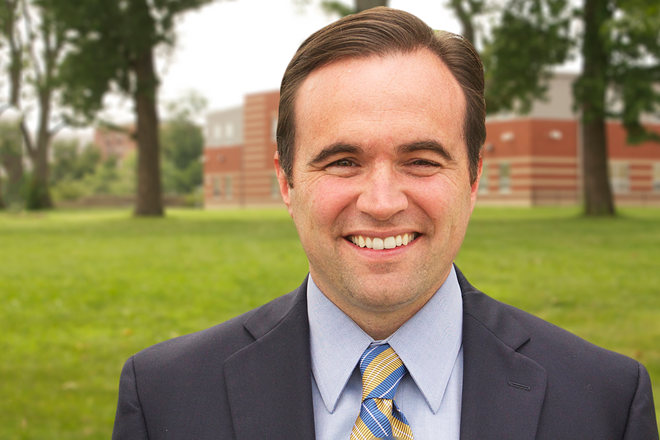 Good morning, all. Hope you had a good time with the glorious weather this weekend. I got a lil tipsy and found a goat at Bockfest. Fun times. But now it’s Monday and it’s time to get some news going.

Walnut Hills Redevelopment Foundation Executive Director Kevin Wright will step down April 6, according to a news release this morning from the community development organization. Wright served nearly seven years as the head of the WHRF. No reason for his departure has been given.

In its statement, the redevelopment group thanked Wright for his work and highlighted its successes since rebooting in 2011, including the creation of more housing in the neighborhood, completion of a neighborhood plan, rehabilitation of historic buildings like the Paramount and recruitment of organizations like minority startup booster MORTAR and businesses like Video Archive to the neighborhood.

Walnut Hills has also wrestled with housing affordability and displacement during its rapid changes, as CityBeat explored in a recent news feature.

WHRF says it will announce more details about an interim executive director and its search for a new permanent head later this month. “We're incredibly thankful for Kevin's leadership, and we're excited to continue the important work of revitalizing Walnut Hills in a community-based and equitable manner,” the press release says. “The WHRF Board has begun deliberations on the search process for Kevin's replacement that will incorporate the Walnut Hills area community, the WHRF staff and the WHRF Board.”

• Mayor John Cranley says that it would be a “tragic mistake” if leaders and West End residents reject FC Cincinnati’s potential soccer stadium in the neighborhood. Cranley weighed in on a proposed land swap between Cincinnati Public Schools and FCC during an interview with The Cincinnati Enquirer. That swap would put the team’s $200 million soccer stadium on the current site of Stargel Stadium, used by six public schools, and move Stargel across Ezzard Charles Drive. Cranley cited the potential for economic development in the West End as a big opportunity to change its history of disinvestment. However, the city itself found two decades ago that a major stadium alone probably wouldn’t bring much new beneficial economic activity, as we discussed in our news feature here about FCC in the West End. While construction of the stadium could bring short-term employment benefits, especially with a community benefits agreement that city council and West End groups have been discussing, there is little evidence to show that long-term, living-wage jobs are created by stadium development. That’s an opinion many economics experts share.

• Meanwhile, a conservative group is calling foul on a $4 million ask for state funds the team is making for its stadium. Free-market think tank the Buckeye Institute says the team’s request to state lawmakers to help with stadium infrastructure is “pork” and is one of the top 10 worst budget requests of 2018. A $1.2 million request from Cincinnati’s Playhouse in the Park for renovations of its theater also made that list. Initially, officials put a $10 million request for stadium funds on Hamilton County’s wish list from the state.

• About 85 West End homeowners say they’re cool with the new FCC stadium — but don’t want Stargel relocated near them, the Business Courier reports. This is yet another wrinkle in the debate over the still-hypothetical stadium, construction of which hinges on FCC gaining a franchise with Major League Soccer. Residents at the mixed-income development City West who own their homes say they don’t want a stadium at Stargel’s proposed site south of Taft High School on vacant land previously reserved for upscale homes built as part of CitiRama. Those residents say they’re concerned about noise and light from the new Stargel, which in some cases would be roughly 60 feet from their houses.

• Tomorrow, Cincinnati City Council will get its first report of the year on the streetcar during its transportation committee. It’s going to be a rough meeting. As we reported after the Southwest Ohio Regional Transit Authority’s last board meeting, ridership in January was half of what was budgeted for the project and the streetcar is running $9,000 in the red. The 3.6 mile rail transit loop has struggled with multiple days of closures due to equipment malfunctions related to cold weather. The problems mean the city’s streetcars will need to be almost entirely overhauled by manufacturer CAF, and the city has been withholding payment from the company until things are fixed. We’ll follow along and report on other revelations from the report to council.