George Zimmerman to Be Charged

Justice could be on its way for slain teenager Trayvon Martin, who was shot and killed by neighborhood watch volunteer George Zimmerman on Feb. 26 in Sanford, Fla. Zimmerman, who said he was acting in self-defense on the incorrect assumption that Martin was armed, has since dodged legal charges on the basis of Florida's controversial "Stand Your Ground" law, which offers legal protection to citizens who use deadly force on a person to prevent injury, death or the occurrence of a forcible felony.

This afternoon, Florida special prosecutor Angela Corey announced charges will be filed against Zimmerman, although the nature of those charges isn't yet clear. The announcement comes just a day after Zimmerman's attorneys, Craig Sonner and Hal Uhrig, withdrew themselves from his case, stating that they'd lost touch with Zimmerman after he'd taken actions without consulting them. According to The Washington Post, Sonner and Uhrig expressed concern over Zimmerman's emotional and physical well-being. Corey's office says it will release new information about the case at a press conference 6 p.m. Wednesday.

Recently, George Zimmerman launched his own website, therealgeorgezimmerman.com, which features a prominent PayPal link where supporters can donate to Zimmerman for living expenses and legal expenses, which he claims are much-needed as a result of the media frenzy generated by the slaying. Aside from the PayPal link, there's not much to Zimmerman's site, other than a gaudy American flag background and a slew of patriotic quotes, including this token from 19th century Norwegian playwright and poet Henrik Ibsen: “A thousand words will not leave so deep an impression as one deed.”

The Columbus Dispatch, however, documented a faux pas on the site before Zimmerman could correct it. One page on the website is dedicated to "persons whom have displayed their support of justice for all," and, until yesterday, featured a photo of an act of vandalism that was spray-painted on the wall of Ohio State University's Frank W. Hale Jr. Black Cultural Center. The words "Long Live Zimmerman," which cover the wall in dripping white paint, has been labeled as a hate crime. The Dispatch's article alleges that "George Zimmerman is either ignorant or supports hate crimes," according to several Ohio State University students. 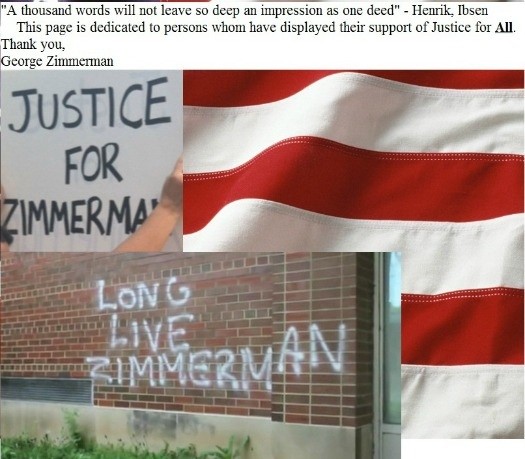 Stay tuned to The Washington Post's story for updates on Zimmerman's prosecution.