It's in Pendleton, alongside another new mural honoring blues singer Mamie Smith, also a Cincinnati native. 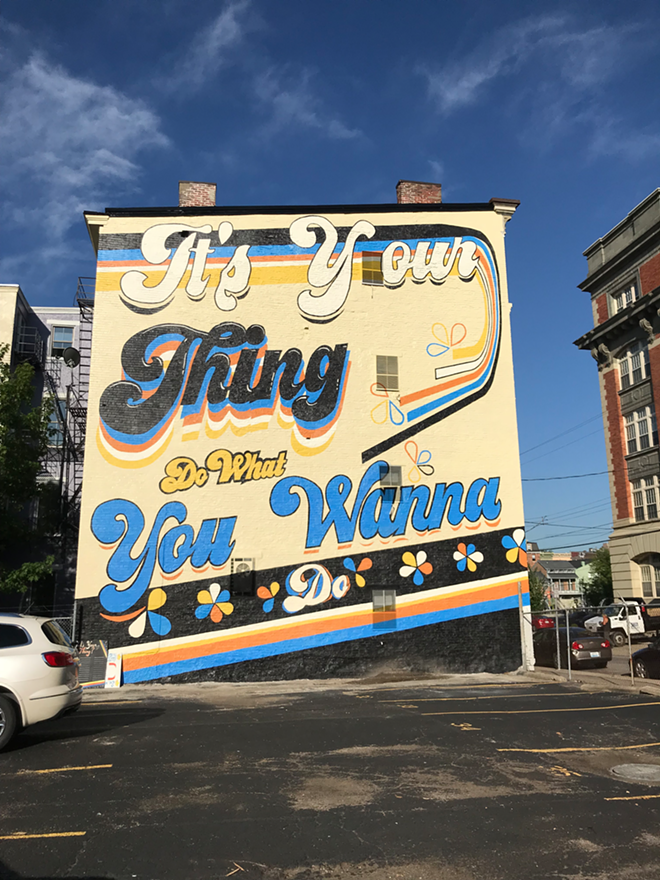 PHOTO: Catherine Eifrig
New "It's Your Thing" mural in Pendleton

Another ArtWorks mural celebrating Cincinnati's music heritage has just been completed — it's called "It's Your Thing" and is painted in the semi-psychedelic Pop Art/Word Art style reminiscent of such 1960s-style artists and designers as Peter Max or Milton Glaser.

"It's Your Thing" is located at 311 E. 13th St. in Pendleton, adjacent to another recently completed ArtWorks mural honoring Mamie Smith, who was born here in the 1880s and went on to become the first African-American Blues recording artist, paving the way for “Ma” Rainey, Bessie Smith and Billie Holiday.

The "It's Your Thing" mural does not depict the Isley Brothers but rather shows, in flowing and colorful cursive writing bordered by floral decorations, the famous lyrics of The Isley Brothers' 1969 Funk anthem, "It's your thing, do what you wanna do." (The next line, "I can't tell you who to sock it to," is not featured.

According to Wikipedia, The Isley Brothers' family lived in the West End and then moved to Lincoln Heights before returning to Cincinnati to live in the South Fairmount area. The group started as a vocal trio featuring the three older brothers — O'Kelly, Ronald and Rudolph — who moved to New York in the late 1950s and found success with the 1959 hit "Shout." Their family subsequently moved to New Jersey in 1960. Younger brother Ernie eventually joined, playing bass on "It's Your Thing" and lead guitar on 1973's "That Lady." Another brother, Marvin, joined up and played bass in 1971. O'Kelly and Marvin are deceased; Rudolph is retired.

The plaque accompanying the mural explains its purpose: "ArtWorks partnered with Bartlett Wealth Management to bring to life a mural that celebrates the work of Cincinnati-born musical legends the Isley Brothers. Inspired by one of the group’s most beloved recordings from the 1960s, “It’ Your Thing,” artists Jonathan and Lindsey Lamb integrated the groovy style of the 1960s with contemporary design elements to highlight the Isley Brothers’ impact on America’s musical landscape. The song’s lyrics, featured loud and proud on the mural, encourage viewers to express themselves and do what makes them happy. The mural is part of ArtWorks’ Cincinnati Legends Series, a collection of large-scale public murals, primarily spread across Over-the-Rhine, honoring a diverse group of local personalities who have made names for themselves in the city of Cincinnati and beyond by creating lasting, inspiring legacies through their individual impacts on the world. A team of eight local Youth Apprentices worked under the direction of two Teaching Artists to paint this installation."

The mural dedication comes just before the current edition of The Isley Brothers — featuring Ronald and Ernie — is scheduled to play Jack Casino on Oct. 6.