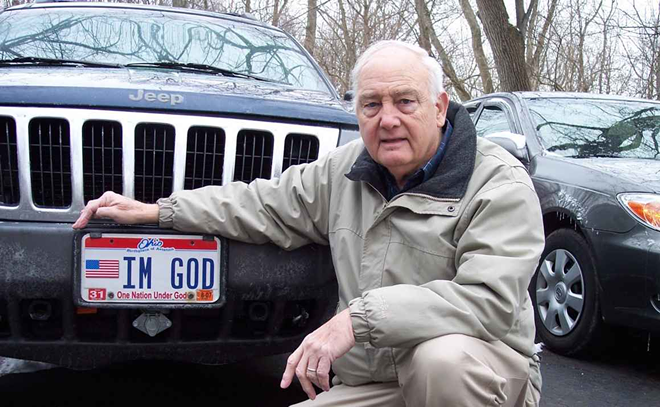 The U.S. District Court for the Eastern Court of Kentucky ruled that the denial of the plate by the Kentucky Transportation Cabinet violated Hart's First Amendment rights.

Hart filed a lawsuit in November 2016 after the Kentucky Division of Motor Vehicles refused his request for the vanity plate. The ACLU write-up says the officials, who must approve certain religious license plate messages, denied Hart because the phrase "IM GOD" was "obscene or vulgar" and "not in good taste."

The Freedom From Religion Foundation and ACLU of Kentucky backed Hart's suit and "challenged the Transportation Cabinet’s denial of his plate based on statutory viewpoint restrictions that communicate religious, anti-religious or political messages," says the ACLU post.

The court's ruling says that while the Commonwealth is allowed some oversight on vanity plates, it overstepped its power in denying Hart.

"The same year Mr. Hart was denied a plate reading 'IMGOD', the Transportation Cabinet approved the contradictory plates 'NOGAS', 'EATGAS', 'VEGAN', and 'BBQ4U' among many others. [R. 49-25.] Under the Transportation Cabinet’s logic, the Commonwealth is not only contradicting itself, but spewing nonsense...To allow such plates as 'IM4GOD' and 'LUVGOD' but reject 'IMGOD' belies viewpoint neutrality. Regardless, the Court concludes that in this case, §186. 174(1) is an unreasonable and therefore impermissible restriction on Mr. Hart’s First Amendment rights."

“I’m thankful to finally have the same opportunity to select a personal message for my license plate just as any other driver,” says Hart in the ACLU post. “There is nothing inappropriate about my view that religious beliefs are subject to individual interpretation.”

You can read the full ruling online; it's pretty entertaining — as far as legal fodder goes.