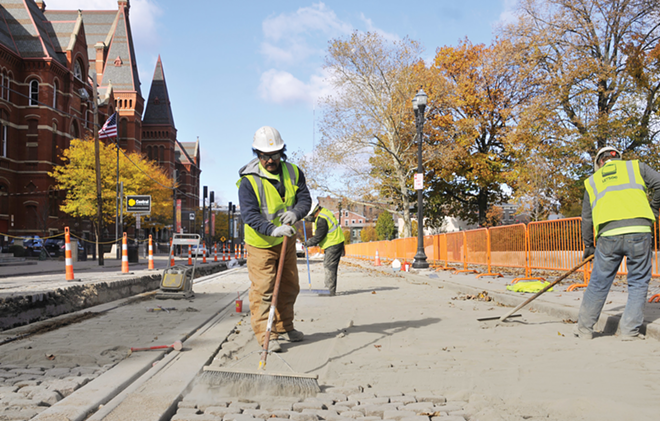 This morning, as it seems every morning, people are disagreeing on the streetcar. I know, big breaking news, right?

Currently, the disagreement is as follows: Have cost estimates gone up for the always-embattled transit project’s eventual operations, or haven’t they? It depends on what you read, and which study you look at. The Enquirer yesterday ran a story reporting that the deficit the streetcar will run — the gap between operating costs and its revenues — will be $2.6 million in its first full year of operation and would then climb to $3.85 million by 2025. The story then compares those numbers to a study done in December by KPMG, an independent auditing firm, which found that operating deficit would top out at $2.4 million.

So clearly the expected costs of the streetcar have gone up right? Not so fast, the city says. Streetcar project leader John Deatrick said yesterday that the city has always expected the deficit to end up around the $3.85 million figure, which were included in an earlier study of the project. The city isn’t sure exactly how the KPMG arrived at their numbers, but a spokesperson for SORTA told the Business Courier that the two estimates aren’t comparable.

The KPMG study was commissioned by City Council during the December fight over possible cancellation of the streetcar project, and is a cost assessment of that proposed cancellation. The city’s numbers were developed by another group, called TRA, and they take into account staff and administrative costs. It’s unclear if the KPMG numbers do this as well.

Deatrick did reveal that the start-up costs for the streetcar— training staff, testing the project, and other details— could cost $1 million more than originally anticipated. He asked council for that money, which will be needed by 2016, at the Transportation Committee meeting yesterday.

• A new development broke ground yesterday at one of Northside’s most prominent intersections. The Gantry building will hold 130 apartments and first-floor retail and dining at the corner of Blue Rock and Hamilton Avenue. The $13 million project is expected to finish next year. Check out this story for illustrations of the building, which looks to be a big departure from the aesthetics of the neighborhood now.

• Gov. John Kasich, Secretary of State Jon Husted and Attorney General Mike DeWine have all received those special invitations to a party you never want to go to: court hearings over alleged campaign finance improprieties. The three Ohio GOP leaders received subpoenas related to millionaire and big GOP funder Ben Suarez. The North Canton businessman is accused of funneling illegal contributions to two other Republicans, Ohio Treasurer Josh Mandel and Rep. Jim Renacci, a Republican from Wadsworth, after they sent letters on his behalf over a California false-advertising lawsuit. Prosecutors charge that after the letters were sent, Suarez channeled $100,000 from his employees to each politician. Both later returned the donations.

Kasich, Husted and DeWine are trying to RSVP a “no, thanks” to the whole mess, fighting the legal standing of the court summons. Suarez wants the Republicans to testify that letters from politicians on constituents’ behalf are normal and legal.

• A new study by Arizona State University’s Carey School of Business found that Ohio is ranked 38th in the nation in terms of job growth. That’s not that great, really. On the upside, we beat Michigan by one spot and New Jersey by several. Hey guys, we’re not New Jersey!

• ICYMI: American Apparel kicked their founder to the curb recently after years of allegations that he’s, well, super creepy. Dov Charney has weathered a number of sexual harassment lawsuits and other scandals during his time leading the company. None of that was a big deal for the label, which is famous for its racy ads featuring scantily clad models, until it started losing money. Like, lots of money. Now the company is looking to distance itself from Charney’s weird sideshow in order to clean up its image a bit.

* Finally, and really relevant to nothing in particular in the news today, here's a pretty awesome map someone recently did of America's tribal nations as they existed before contact with Europeans. NPR has a great story on the map here.