Construction should begin next month on the long-awaited transit hub at the city's second-busiest transfer location. SORTA says the project should be done by summer 2020. 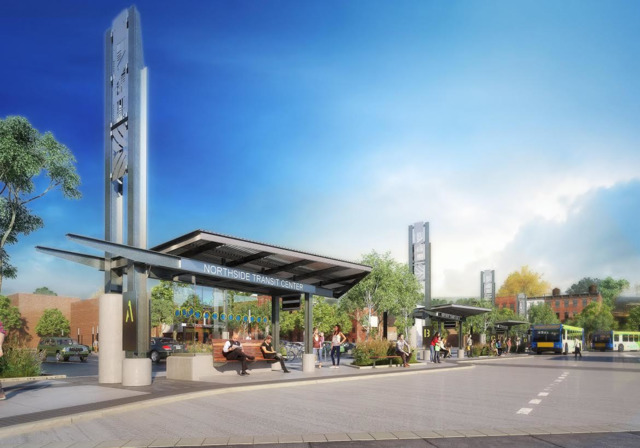 MSA Design
A rendering of the coming Northside Transit Center

Construction of the new Northside transit center will begin next month after the Southwest Ohio Regional Transit Authority board yesterday evening approved a contract with Cincinnati-based Graybach, LLC to build the $3.7 million project.

Neighborhood groups in Northside have been asking for a bus transfer hub near Knowlton's Corner for almost two decades. The area near the bustling intersection is the second-busiest transfer location in the city behind downtown's Government Square, according to SORTA, with routes 15X, 16, 17, 19, 20, 23X, 27 and 51 all flowing through the area.

"This is something that the Northside community has been very supportive of and very interested in coming to their community for quite some time," City of Cincinnati Planning Director Katherine Keough-Jurs said in April.

Currently, the bus stops near the intersection don't have shelters, and many don't even have bus benches. SORTA wants to oblige the neighborhood's long-standing requests by building eight platforms with open-air shelters, a small rest station for Metro drivers and nine parking spaces for park-and-ride bus riders to serve Metro riders waiting on those buses.

The transit center would have another benefit: taking stops off busy Hamilton Avenue and moving them to nearby parcels of land on the corner of Spring Grove Avenue and Blue Rock Street, easing traffic congestion and perhaps pedestrian safety concerns on a street that has seen a number of pedestrians hit by cars.

SORTA acquired some of the needed parcels several years ago. Another is occupied by a parking lot owned by the Northside Business Association. Cincinnati City Council in April approved necessary zoning changes for the transit center, removing one of the last hurdles for the long-awaited hub.

Federal grants fund about 80 percent of the project, which SORTA says should be done by summer 2020.