CityBeat's Kathy Schwartz is keeping you covered throughout October as she visits exhibits and events that make up FotoFocus. 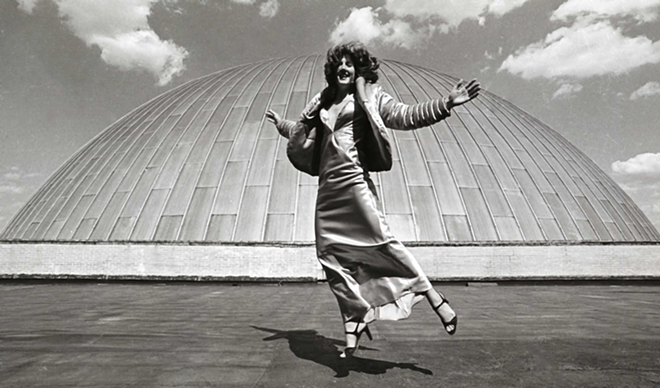 Courtesy of the artist Melvin Grier
Melvin Grier had always been curious about the space on the roof of Union Terminal, behind the dome. He took a few standing shots oh his model, but then asked her to jump, inspired by the mid-century celebrity portrait photographer Philippe Halsman. // "Clothes Encounter," unknown year. Black and white inkjet print from scanned 35mm negative, 18 x 10 inches.

Cincinnati has never been known for high fashion like New York City or Los Angeles. But Melvin Grier’s sense of style could stop downtown traffic.

In front of the old McAlpin’s department store building on Fourth Street, Grier posed his model in a wicker chair just long enough to snap some pictures before the light over the crosswalk turned green. Desperate times called for desperate measures, the longtime Cincinnati Post photographer told an audience during a brown-bag lunch. Though it was too cluttered inside the store to shoot, he figured that outside he would be guaranteed about a minute to create a head-turning photo.

Grier, who worked at the Post from 1974 until it folded in 2007, is exhibiting his fashion pictures for the first time at the Behringer-Crawford Museum in Covington’s Devou Park. He built a reputation covering breaking news and sporting events around the world, but he liked fashion layouts because they represented a rare opportunity to arrange a shot.

Designer Coco Chanel once said: “Before you leave the house, look in the mirror and take one thing off.” The Clothes Encounter photographs are unframed and on ragged-edge paper, which is reminiscent of how most of these images were originally viewed: on a sheet of newsprint. Grier’s handwritten captions are a smart personal touch.

Grier shies away from being called an artist or even a photojournalist, instead he prefers the old-school term of newspaper photographer. Whatever the story, he captured his hometown and its residents.

“Style is where you find it,” his essay for the show reads. Nancy Pratt, one of his favorite models, worked in the circulation department of the Post. While driving to work and other assignments, Grier made mental checklists of potential fashion shoot locations, including overpasses, alleys and the back of Union Terminal’s half-dome. Then he waited for the chance to show us everyday scenes and ordinary people in fresh ways.

Cincinnati, Clothes Encounter may just be your runway moment. 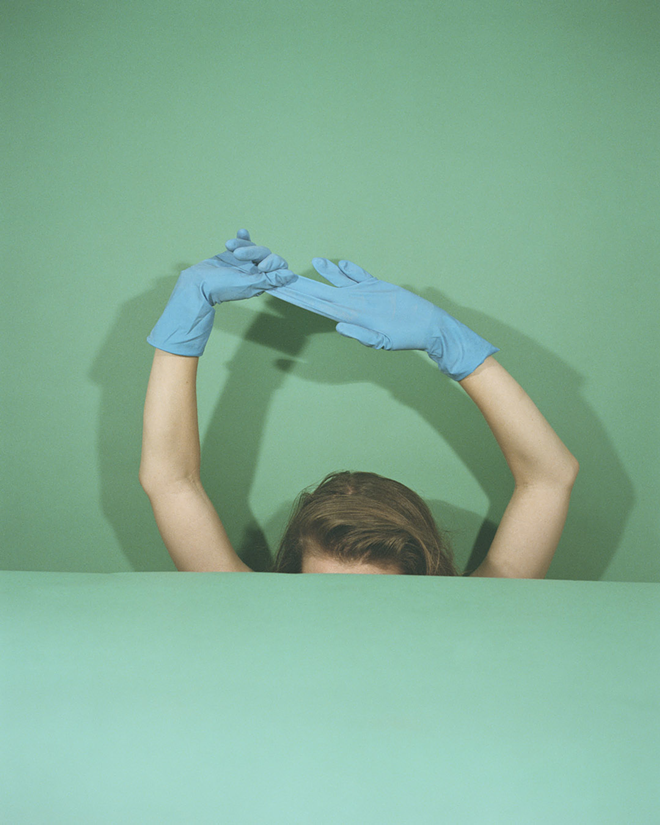 Body Doubles at the Art Academy

The Art Academy of Cincinnati presents a small but significant exhibition with five semi-nude female portraits from photographer Whitney Hubbs, who will be in town for a lecture Friday.

Hubbs was once a part of Portland, Oregon's riot grrrl scene, where she DIY-ed zines, performed and participated as an activist. Currently living in New York state, she intends to interrupt the male gaze with twists on traditional poses. Responding to centuries of patriarchy in art, her models cover up and take charge of how they’re depicted. As the show’s title of Body Doubles suggests, the women in these pictures stand in for millions more who also are reclaiming ownership of the feminine form.

For a recent talk befitting the FotoFocus theme of Open Archive, Emily Everhart, an assistant professor at the AAC, posted examples of nudes from the Renaissance through the 20th century next to Hubbs’ works.  Everhart pointed out that the 19th century French painter Gustave Courbet invited voyeurism as “The Young Bather” dipped her toe in a stream.  Hubbs’ “Woman no. 3” — her titles are swipes at Willem de Kooning’s buxom “Woman I” and “Woman II” paintings —  raises her arms in a fashion similar to the bather’s but otherwise reveals nothing more than her forehead. The only garments we see her preparing to cast aside are the rubber gloves of domestic drudgery. Her gesture resembles a striptease, but we’re not certain it’s OK to watch.

The sole face in the series is that of a bare-breasted Hubbs in an overexposed self-portrait. Her nipples are washed-out, as if to remind the viewer: “Hey, pal, my eyes are up here.”

Courtesy of the artist, Mickalene Thomas; Lehmann Maupin, New York and Hong Kong; and Artists Rights Society (ARS), New York
A self-portrait of Mickalene Thomas she created as part of a visual art/performance piece at Yale. She dressed as a townie and no one recognized her on campus—she was even asked for an ID. // "Negress with Green Nails," 2005. C-print, 31 x 48 inches. © Mickalene Thomas.

Like aforementioned Whitney Hubbs, multimedia artist Mickalene Thomas — who received her M.F.A from Yale — also subverts traditional depictions of women, particularly as a voice for African-Americans and lesbian culture. Starting with her mother, a former model, Thomas’ subjects look viewers directly in the eye with a confidence born out of the 1970s; it espouses a black-is-beautiful message.

In one piece, Thomas reinterprets Édouard Manet’s scandalous “Luncheon on the Grass" — which was made famous for depicting a nude woman unashamedly gazing back at viewers while she lounged outdoors as two fully-clothed men sit beside her — with three sensual black women striking similar poses donning bright sundresses and full makeup. Thomas’ experiments with self-portraiture and performance art challenge notions of what a Yale student should look like.

Big, bold, beautiful, confident and sexy, Muse can inspire anyone who is tired of being defined by someone else’s ideals.

For more about the $25 FotoFocus passport and other events: fotofocusbiennial.org.