In a recent 5-4 decision, the U.S. Supreme Court upheld Ohio's policy purging inactive voters, but a new bill could change that 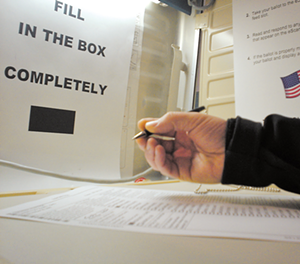 Hello all. Here’s a quick rundown of the news in Cincy right now.

Cincinnati City Councilman P.G. Sittenfeld is set to announce a proposal for a new funding source for the city’s human services — likely a boost to the city’s admissions tax — at a news conference at the Center for Addiction Treatment in the West End at 11 a.m. In a press release this morning, Sittenfeld said the funding source he would introduce will raise $3.6 million for human services, community councils and community development corporations. An admissions tax boost would require an amendment to the city’s charter, needing six votes on council to put it on the November ballot for voter approval.

• Other council members put forward their proposals for the city’s budget yesterday, outlining where they would boost spending, what they would cut and where they would find new revenue to cover their additions. On some Democratic councilmembers’ minds: funding for the Central Parkway bike lane, human services, neighborhood groups and more. Councilman Jeff Pastor, as well as other council members, has also proposed restoring city funding to tech incubator programs. You can read our story on those budget proposals here.

• West End Community Council President Keith Blake won't face impeachment for signing a community benefits agreement with FC Cincinnati earlier this year against the wishes of the council's general body. The community council voted 34-4 to keep Blake, whose term is up next year, calling the impeachment charges brought against him unfounded. Blake was removed from a six-member negotiating team that hashed out a last-minute framework for a CBA eventually approved by Cincinnati City Council.

• Following a brief but intense clash between Cincinnati Parks and activist and musical group Triiibe, another local group that aids individuals without homes is having difficulties with permits for its events downtown. Maslow's Army, a nonprofit that once fed people experiencing homelessness at Fountain Square, was denied permits to do so this summer by the Cincinnati Center City Development Corporation, the private group the city has contracted to run the downtown plaza. 3CDC says it has already booked every Sunday at the square for the summer, but tried to offer other dates to Maslow's Army. Representatives with Maslow's, however, say they've been to the square since they were removed and say there hasn't been programming on Sundays. 3CDC and the group are set to meet today to try and come to an agreement about the square.

• Greater Cincinnati is about to get another brewery, and it’s a name you may know well. Wiedemann Brewing Co. closed in 1983 after more than a century in operation. Locals Jon and Betsy Newberry bought the rights to the name in 2012 and planned on reopening in Northern Kentucky. The financing for those plans for that fell through, but the couple pushed on and found a space in Saint Bernard, investors and loans. On June 26, Wiedemann will open again on Vine Street in a historic former funeral home. The brewery will also feature a full kitchen.

• The Walnut Hills Redevelopment Foundation has scored a $100,000 grant for a new grocery store at the location of the former Kroger on McMillan Street after raising more than $16,000 independently. A number of neighborhood residents chipped in for the project, which could alleviate the area’s status as a food desert.

• Buildings in Over-the-Rhine received more than $450,000 in Ohio Historic Tax Credits yesterday for renovations that will bring housing for young professionals. Owner Michael Paul says he wants to spend more than $3 million rehabbing 100 E. Clifton and 101 and 105 Peete St. into 16 apartments and retail space. The project was one of 12 to be awarded more than $30 million in state historic tax credits.

• On to national news. After the U.S. Supreme Court upheld Ohio’s policy of purging inactive voters from the state’s voter rolls, U.S. Sen. Sherrod Brown has helped introduce a bill that would end the practice. The bill, introduced with fellow Democrat U.S. Sen. Amy Klobuchar of Minnesota, would amend the federal National Voter Registration Act to stipulate that inactivity is not a valid reason to remove someone from voter registration rolls. Ohio has purged thousands of voters who did not vote over the course of six years or return forms from the state.