Hamilton County Clerk of Courts Aftab Pureval is a rising star in the Democratic Party — but he'll face big challenges as he moves to contest U.S. Rep. Steve Chabot, who has held his seat almost uninterrupted since 1994. 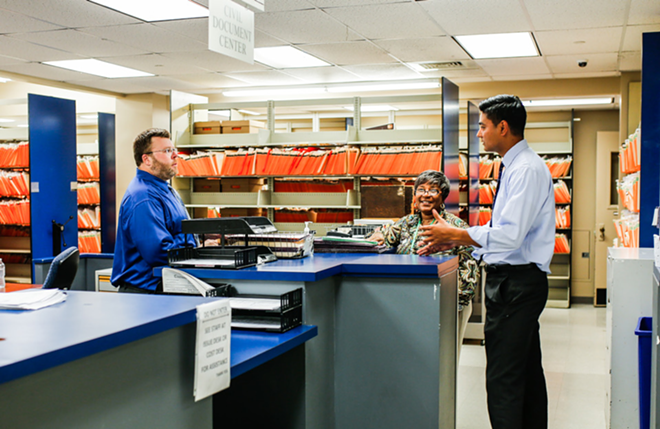 Hello all. Phew. Yesterday was a heck of a news day. Here’s some quick updates to get you informed about what’s going on around town today.

At its monthly meeting yesterday, Cincinnati Public School Board members told attendees worried about a potential soccer stadium on CPS land in the West End that they don’t know much yet about what FC Cincinnati has in mind. The team proposed a partnership in a letter to the board earlier this month, but has released little other information. As the soccer team waits to hear back about its bid for a Major League Soccer franchise — and considers where it will put a stadium if it wins one — the school board says they’re not rushing to make any decisions and don’t even know what is on the table yet. You can read more about the meeting, residents’ concerns and what FCC has to say about it all in our story here.

• Hamilton County Clerk of Courts Aftab Pureval, an up-and-coming player in the Democratic Party, announced yesterday he would seek his party’s nomination to take on U.S. Rep. Steve Chabot for his 1st congressional district seat. Pureval is on a something of a hot streak, upsetting long-time Republican Clerk of Courts Tracy Winkler in 2016 before cutting some $800,000 from the office’s budget. At announcements in North Avondale and Loveland yesterday, he hit major Democratic talking points on health care and other issues while painting Chabot as a sycophant to President Donald Trump.

"This is not a decision I entered into lightly, or something I planned to do," he said. "But on issue after issue, from trying to rip health care away from 35,000 people in Southwest Ohio to giving tax breaks to billionaires, Steve Chabot is enabling Donald Trump and moving our country in the wrong direction."

He drew big crowds at the events, but Pureval also faces some big obstacles. Already, Chabot and other Republicans are pointing out that Pureval wasn’t registered in the 1st congressional district until literally yesterday, and that he has lived in a $400,000 house in Hyde Park. Pureval has countered that he moved recently into the district and that he’s served Hamilton County as clerk no matter where he lives. There’s no legal requirement that a candidate live in the district where they’re running, but it definitely doesn’t help to live elsewhere, especially when you’re running on the West Side. Chabot issued a three-paragraph statement about Pureval’s run, which in and of itself shows that Chabot, who has held his seat almost uninterrupted since 1994, is paying attention.

• Cincinnati City Council Jan. 31 approved the appointment of Jim Goetz to the Cincinnati Park Board, despite controversy over the exit of outgoing Park Board Chair Dianne Rosenberg. There was some arguing between some council members and Mayor John Cranley over the appointment and underlying issues at the Park Board, of course. You can read more about that, and who voted to appoint Goetz, in our story here.

• A Cincinnati Metro driver who hit two people and killed one in Hyde Park in 2016 was looking away from the road to throw away a cup of chili when the accident happened, a lawsuit from the victims' family alleges. That lawsuit also contains details about 59-year-old Tyrone Patrick's previous driving record with Metro, which included 39 accidents over the course of a decade. It's unclear how many of those accidents were Patrick's fault, though the lawsuit does allege that he had been reprimanded by Metro for past incidents involving distracted driving. Patrick was sentenced to three years probation for the accident.

• Three Democrat state lawmakers want State Rep. Bill Seitz, a Republican, to resign after comments he made about fellow Republican state lawmaker Candice Keller at a Jan. 23 party for an outgoing GOP staffer. At that party, Seitz called Keller “a nut job” and another Republican, State Sen. Matt Huffman, used a crude slang term for female anatomy. Both lawmakers have since apologized for their actions. After the apologies, Republican State House Speaker Cliff Rosenberger said the lawmakers wouldn’t receive any further discipline. But Democrat State Reps. Teresa Fedor, Michele Lepore-Hagan and Rep. Nickie Antonio want him to reconsider, and are asking for Seitz to leave office.

"When elected officials contribute to a hostile work environment, it is time for a change. Apologies are not enough," they wrote in a letter to the speaker today. “

On the Democrat side, former Consumer Financial Protection Bureau head Rich Cordray has raised the most, bringing in more than $2 million. That may not sound like a lot, but given Cordray just jumped into the race in December, it’s an impressively quick haul. By comparison, DeWine has raised about the same amount since August of last year. Behind Cordray, former State Rep. Connie Pillich has raised almost $5 million for her bid, followed by State Sen. Joe Schiavoni, who has raked in about $2.6 million.