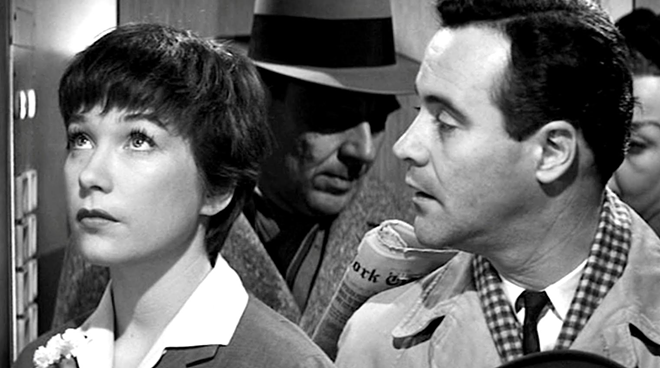 YouTube screenshot
Shirley MacLaine and Jack Lemmon in 'The Apartment'
If you’re under 70 years old, there’s a good chance you’ve never had the opportunity to watch Billy Wilder’s masterful The Apartment on the big screen. That changes this coming weekend (Friday-Monday) as The Esquire hosts four screenings of the 1960 film, starring Jack Lemmon and Shirley MacLaine at her effervescent best.

It feels weird to call The Apartment a “rom-com,” but that’s fundamentally what it is — albeit with a prominent melancholic streak. In one of his finest roles — in which he plays his soulful (if bumbling) everyman character to perfection — Lemmon is C.C. “Bud” Baxter, whose success at an insurance company suddenly hinges on his discretion in regards to the indiscretions of managers at the office who begin to borrow Baxter’s apartment for liaisons with their mistresses. Things take a turn when it turns out one of the mistresses is also his big-time crush, elevator operator Fran Kubelik. That’s when things get really dark… then darkly sweet.

The Esquire screening is a part of its series of Oscar-winning classics; The Apartment won Best Picture in 1961 and Wilder — just a year removed from another immortal classic, Some Like It Hot — took home the Best Director trophy, one of seven Oscars he’d earn in his lifetime. The Apartment is one of four Wilder films included in the American Film Institute’s list of the 100 greatest movies of all time.