Opening this summer, the new bar takes over the space formerly occupied by board game bar Rook OTR

An experiential new bar concept will be opening on Over-the-Rhine's Vine Street this summer in a space that might seem familiar.

Copper and Flame will take over the space formerly occupied by The Rook OTR, a game board bar and eatery that closed last spring (and later reopened in conjunction with Harrison's Divrsion Arcade.) 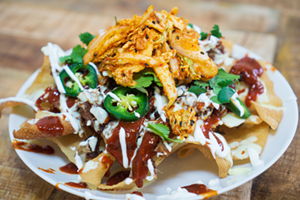 The bar is helmed by Kathy O'Connell, former operator of Revolution Rotisserie, and Brandon Hughes, co-owner and co-founder of Pleasant Ridge's Nine Giant.

The new bar will be based around a pour-your-own-drink concept, a notion that is gradually gaining popularity in other cities.

The duo first discovered the inspiration for Copper and Flame at a bar in Chicago called Tapster last year.

When visitors enter Copper and Flame, they can load money onto an RFID card, which they can use to buy their drinks.

"When you walk past the hostess stand, you will see walls of taps with iPads," said O'Connell in an email. "You simply walk up to the wall, decide what you want to sip and scan your card on the iPad and pour by the ounce. This enables you to pour a whole pint or just a taste!"

The first floor will offer a selection of 52 draft beers to choose from, featuring both local and national craft brands; head to the second floor for draft wine and draft cocktails.

In addition to drinks, the bar will offer a menu of elevated street food, with a fusion of Central/South American and Southeast Asian flavors. Guests can expect bites from local favorites like Tortilleria Garcia, Sixteen Bricks Artisan Bakehouse, Urban Stead Cheese and Tuba Baking Co. According to O'Connell, diners will order their food from a self-order kiosk or from a person at the ordering counter and will be texted once the order is ready.

The bar is slated to open mid-summer.