Covington-based design firm BLDG Refuge announced it has acquired another studio across the river: We Have Become Vikings. The acquisition brings BLDG's number of employees to more than 25.

Located in Over-the-Rhine, We Have Become Vikings is helmed by Jason Snell and has made itself known locally for "engaging audiences by melding a unique blend of mainstream appeal with the right amount of edge," according to a press release.

You may remember their Twin Peaks pop-up shop last fall, in which their storefront at 1355 Walnut St. temporarily transformed into the Black Lodge — and they sold some original dreamy T-shirts and damn fine skateboards via Habitat. Or maybe you grabbed an equally cool limited-edition Nirvana T-shirt earlier this year.

Locally, they've worked with Northern Kentucky University, the Art Academy of Cincinnati, Landor, SHP Design and on big-name community projects like the BLINK light and art festival and Lumenocity. 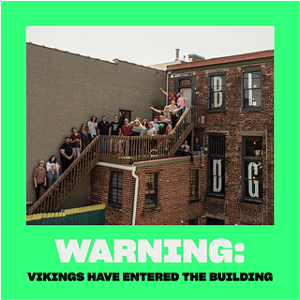 "We are all thrilled to welcome Jason and the Vikings to the team at BLDG,” says Troy Curry, BLDG's chief operating officer, in a press release. “We look forward to combining his decades-long expertise in pushing brands to their creative heights with our growing roster of clients and copious creatives. The acquisition of the Vikings also gives us more production capabilities in house, making it easier for us to offer environmental experiences, build lifestyle brands and bolster our motion design capacity for clients.”

Snell will come onboard as BLDG's creative director and WHBV's current OTR location will close at the end of its lease in August. The staff will then move across the river to BLDG's space at 30 W. Pike St. in Covington, where they have been located since 2012.