How Coronavirus Stress May Scramble Our Brains

Our brains are not built to do complex thinking, planning and remembering in times of massive upheaval. Feeling impaired is “a natural biological response”

I’m on deadline, but instead of focusing, my mind buzzes with unrelated tidbits. My first-grader’s tablet needs an update before her online school session tomorrow. Heartbreaking deaths from COVID-19 in New York City make me tear up again. Was that a kid’s scream from upstairs? Do I need to run up there, or will my husband take care of it?

These hornets of thoughts drive out the clear thinking my job demands. Try as I might to conjure up a coherent story, the relevant wisps float away.

I’m scattered, worried and tired. And even though we’re all socially isolated, I’m not alone. The pandemic — and its social and economic upheavals — has left people around the world feeling like they can’t string two thoughts together. Stress has really done a number on us.

That’s no surprise to scientists who study stress. Our brains are not built to do complex thinking, planning and remembering in times of massive upheaval. Feeling impaired is “a natural biological response,” says Amy Arnsten, a neuroscientist at Yale School of Medicine. “This is how our brains are wired.”

Decades of research have chronicled the ways stress can disrupt business as usual in our brains. Recent studies have made even more clear how stress saps our ability to plan ahead and have pointed to one way that stress changes how certain brain cells operate.

Scientists recognize the pandemic as an opportunity for a massive, real-time experiment on stress. COVID-19 foisted on us a heavy mix of health, economic and social stressors. And the end date is nowhere in sight. Scientists have begun collecting data to answer a range of questions. But one thing is clear: This pandemic has thrown all of us into uncharted territory.

The human brain’s astonishing abilities rely on a web of nerve cell connections. One hub of activity is the prefrontal cortex, which is important for some of our fanciest forms of thinking. These “executive functions” include abstract thinking, planning, focusing, juggling multiple bits of information and even practicing patience. Stress can muffle that hub’s signals, studies of lab animals and humans have shown.

“Even relatively mild stress can impair the prefrontal cortex,” says Elizabeth Phelps, a psychologist and neuroscientist at Harvard University. “That’s one of the most robust effects of stress on the brain.”

That impairment has been described in lots of studies. One memorable example comes from 20 panicky medical students facing licensing exams. After a month of high-stress test prep, the students performed worse on an attention test than they did after exams were over. Functional MRI scans showed that under stress, the students’ prefrontal connections to other brain areas were diminished, scientists reported in Proceedings of the National Academy of Sciences in 2009.

When the prefrontal cortex goes quiet, more reactionary brain networks take over. Some of these “primitive” circuits, as Arnsten calls them, center on the amygdalae, two almond-shaped structures buried deep inside the brain that help us sense and respond to threats. Those fast, instinctual reactions “are helpful if you’re being faced with a snake,” Arnsten says, “but not helpful if you’re being faced with a complex medical decision.”

A more recent experiment, published online April 2 in Current Biology, illustrates how stress can shift people away from thoughtful planning. When people were threatened with electric shocks, their abilities to plan ahead flew out the window. Anthony Wagner, a cognitive neuroscientist at Stanford University, and colleagues asked 38 people to learn a familiar route through virtual towns. With practice, people learned these routes, as well as the locations of recognizable objects, such as a zebra, an apple, a stapler or Taylor Swift’s face, along the way.

“Our question was, ‘What are the effects of stress?’ ” Wagner says. To find out, the researchers used “moderately painful” electric zaps to induce stress in some participants, who returned to familiar virtual towns and were asked to find their way to the zebra, for instance. Subjects didn’t know when they would be shocked, and they couldn’t control any aspect of it.

After the training, the participants — some under stress from the expectation of further shocks and some not — were sent back into the virtual town and asked to find their way to a specific item.

But there was a trick: Participants could reach the stapler, for example, faster and more efficiently by taking a shortcut. The shortcut, however, required more planning, more initiative and a heavier reliance on previously learned relationships among streets.

Stressed people were less inclined to take the shortcut, the researchers found. People who were stressed by the possibility of a shock took the shortcut 31 percent of the time, compared with 47 percent for those who weren’t stressed. The stressed people still reached the object they were after, but in a roundabout way. 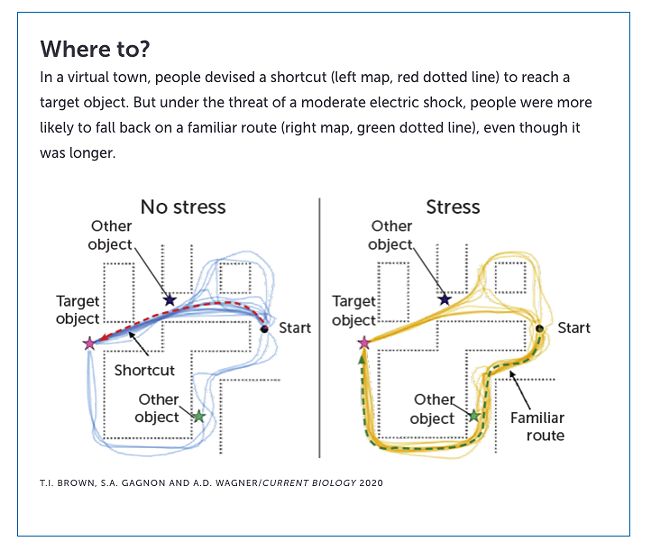 Functional MRI brain scans hinted at what the added stress did to the volunteers’ thinking. The objects planted around town evoked recognizable patterns of brain activity when a person was seeing one of the previously seen objects, or even just thinking about it. By spotting these neural signposts, researchers could tell when people were thinking of a particular path — or of no path at all.

Participants were given eight seconds to plan their approach to reach the target object. Unstressed people generally had a plan; their brain activity contained patterns that signaled these volunteers were thinking about the objects along the shortcut route. Neural signals of a plan even showed up among those who chose to take the familiar route.

Those awaiting a shock appeared to use little foresight. “The stressed people didn’t seem to be thinking about the familiar route when they took it,” says study coauthor Thackery Brown, a cognitive neuroscientist at Georgia Tech in Atlanta. “They were on this fight-or-flight autopilot type behavior.”

What’s more, stress quieted the activity of brain areas needed to make a good plan, including a part of the prefrontal cortex and the hippocampus, a structure important for memory. Those findings suggest that under stress, we are less able to call up our previously learned knowledge and memories. We are working with a deficit.

“In some sense, we’re privileged when we’re not stressed, able to fully harness our cognitive machinery,” Wagner says. “That allows us to behave in more strategic, more efficient, more goal-directed ways.”

Brown sees parallels between these lab-based stressors and the complex and longer-lasting stresses of real life. The participants were attempting to do something complicated while worrying about something else. The stressor is “operating in the background while you’re trying to plan your daily life,” Brown says. “There’s a connection there with the type of thing people are experiencing right now in the context of the pandemic.”

Zooming in to individual cells provides a view of stress’s physical destruction in the brain. Stress can shrink nerve cells and cull their connections, and the prefrontal cortex is particularly vulnerable, studies in both humans and other animals suggest. Other kinds of brain cells are affected too, new research on mice shows.

Big, arboreal cells called astrocytes have many jobs in the brain. Specialized astrocytes called Bergmann glia extend into synapses, the space between nerve cells where chemical messages flow, and slurp up extra chemical signals. This helps keep nerve cells communicating clearly with one another (SN Online: 8/4/15).

But in a test of mice stressed by the ominous smell of a predatory fox, these astrocytes retracted from synapses, neuroscientist Siqiong June Liu of Louisiana State University School of Medicine in New Orleans and colleagues found. That pulling away occurred with a single exposure to that stressful fox odor, and the cells were still retracted 24 hours later, the researchers reported in the April 22 Journal of Neuroscience.

Stress sends a “shrink” message to these astrocytes by reducing the levels of a protein called GluA1. It’s not known whether a similar process, and the resulting changes in how brain cells communicate under stress, happens in the brains of people.

Some stress signals may travel certain neural highways. Physiologist Kazuhiro Nakamura of Nagoya University Graduate School of Medicine in Japan and colleagues studied rats that had just been through the stressful experience of losing a fight, a defeat that is meant to mimic human social stress. A somewhat mysterious region inside the rat’s prefrontal cortex, called the DPC/DTT for dorsal peduncular cortex and dorsal tenia tecta, is important for sending stressed-out signals, the researchers reported in the March 6 Science.

From there, the signals shoot to the hypothalamus, a brain structure that can spark some of stress’s most obvious effects in the body, including a racing heart and sweating. It’s possible that similar brain areas in humans might have roles in sparking stress signals.

These clues are giving scientists a more precise understanding of how stress moves through and affects the brain. But lab studies on stress, by design, have to be somewhat short-lived, with relatively mild stress. Applying lab findings to people’s experiences in life comes with caveats. Huge questions remain about how the crushing and varied stresses of a pandemic might influence people.

Psychologists and brain scientists are on it. As of mid-May, a database tracking COVID-19 social science projects had 294 research projects related to the current pandemic.

These kinds of natural experiments — studying people who had experienced uncontrollable, intense stress in their lives — have happened before. Phelps and colleagues studied how people remember the events of 9/11. People who were in downtown Manhattan at the time of the attacks seemed to rely more heavily on their amygdalae to call up memories of the shocking event than people who were farther away, the researchers reported in 2007 in Proceedings of the National Academy of Sciences. Other researchers have identified thinking problems in people who lived through Hurricane Katrina and other natural disasters.

Stress from the COVID-19 pandemic might influence decision making, Phelps suspects. How do you respond to positive and negative feedback when you’re stressed? Does your desire to do hard work change? She and colleagues are hoping to get answers by surveying people across the United States. Participants will describe their stress reactions and complete online tasks that test decision making and memory.

Other long-term studies will examine how autobiographical memories of the pandemic change over time, how the pandemic affects stress during pregnancy and how mind-set might influence how people cope.

As this chaotic period rolls on, stressors will change and accumulate. Sustained crisis, scientists suspect, can change our brains and their capabilities in even more profound ways than temporary stress.

For now, each of us is left to manage our own personalized stress cocktails. Mine grows more potent with an expanding backlog of tasks, both domestic and job-related, the cumulative sorrow of seeing my kids isolated from their friends and a steady drip of small losses. And I worry for the many people who are worse off, facing illness and financial strain. It’s a lot.

As we all grapple with this reality, scientists have a message for us, one that I find comforting: “Forgive yourself,” Phelps says. “If you’re finding it challenging right now to focus, forgive yourself.”