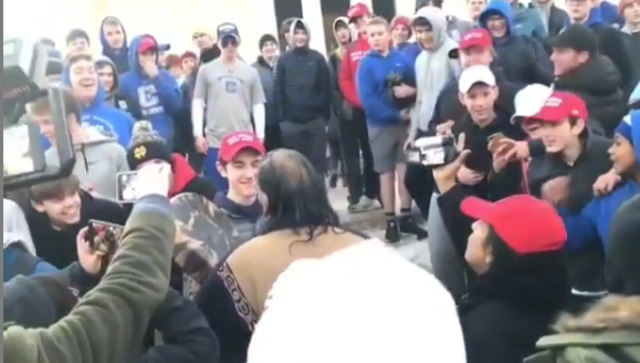 News network CNN has confirmed it has settled a lawsuit brought by the family of a Northern Kentucky private high school student over an incident at the National Mall in Washington, D.C. last year that garnered national attention.

Sandmann's family and his attorneys, L. Lin Wood and Todd McMurtry, claim in the suit that early reports from CNN, The Washington Post and other outlets about a short viral video on Twitter suggested that a group of students from the Northern Kentucky private school, including Sandmann, had surrounded the small group of Native American marchers, including elder Nathan Phillips, on the National Mall and threatened or even physically harmed them.

Later, longer videos showed a more complicated scenario in which the Native American marchers and students converged after the former walked in between the students and another group called the Black Hebrew Israelites. After that video came to light, many news outlets ran corrections or retractions to their original stories.

Sandmann's attorneys originally sought $275 million from CNN. The monetary value of the settlement agreed upon today has not been released.

Similar lawsuits are pending against The Washington Post and other outlets.

Sandmann’s attorneys claim in the lawsuit against the Post that 33 assertions in the paper's initial article were false and defamed Sandmann.

Eastern District of Kentucky Judge William Bertelsman ruled July 26 that the Post's article "states none of those things" that Sandmann's attorneys allege. But on Oct. 28, Bertelsman reversed his decision somewhat to allow discovery on three of Sandmann's 33 claims.

Bertelsman acknowledged Sandmann's claim that he simply stood still as Phillips drummed. Phillips was quoted in the Post article and elsewhere saying he felt blocked in by Sandmann and other students, some of whom were chanting and making "tomahawk chop" motions.

But, the judge wrote, that was Phillips' opinion and, correct or incorrect, it is protected by the First Amendment and the Post and other outlets should be able to print it without penalty. Bertelsman also wrote that Sandmann's suit contained "precisely the type of explanation or innuendo that cannot enlarge or add to the sense or affect of the words charged to be libelous."

Sandmann's attorneys in October sought to add a First Amendment claim to their Post lawsuit.

In his more recent opinion, Bertelsman wrote that the facts of the case had not substantively changed, but said that he would allow discovery on three points involving statements Phillips made in early stories by the Washington Post. Sandmann's attorneys allege that Phillips knowingly lied about the incident and his feelings that he was trapped, and that the Washington Post should have done more to check his veracity.